The Daily Northwestern • May 8, 2019 • https://dailynorthwestern.com/2019/05/08/sports/the-fallout-from-the-defeat-of-the-third-assistant-coach-proposal/

The fallout from the defeat of the third assistant coach proposal 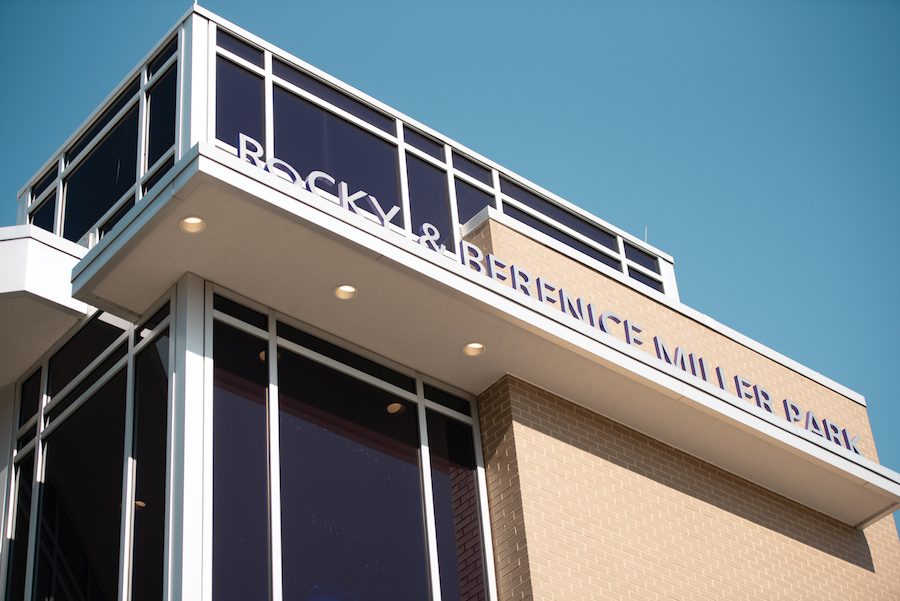 On the morning of April 19, Bo Martino was laying on a hotel bed in Corpus Christi, Texas. Stephen F. Austin, the school where Martino works as the volunteer assistant baseball coach, was in the city for a three-game series against Texas A&M – Corpus Christi. For the past few days, he had been meticulously checking his iPhone whenever it buzzed.

Now, the Twitter notification he had been anxiously waiting for popped up on his screen.

NCAA Proposal 2018-34, which would have transitioned the third assistant coach in baseball and softball from a volunteer to a full-time position, had been defeated at the NCAA Division I Council, the notification read.

For Martino, the decision was heartbreaking. He had returned as the volunteer assistant coach for the Lumberjacks this past offseason, and has been holding lessons almost daily to make extra money. He immediately called his wife with the news.

“She was pretty upset too,” Martino said. “It does put a little bit of strain on our family. We don’t really take vacation or anything because we can’t afford do those things.”

Many coaches across the country received the news with disappointment and anger. Messages from head coaches, volunteer assistant coaches and others flooded Twitter. Some athletic directors who voted against the proposal were forced to defend their position.

As more details about the vote have come out over the past few weeks, the discussion persists. However, with the dust starting to settle, there are still questions left unanswered and next moves to still be decided.

What happened at the meeting

The general results of the vote were released the day after it took place. However, each specific representative’s vote was not disclosed until the April 2019 Council Meeting Report was published online roughly two weeks later.

Of the 64 possible potential votes, the amendment received 25 “yes” votes, or 41 percent of the vote. There were 36 “no” votes to the proposal, and two representatives, with a combined vote power of three, abstained. Because of the abstaining voters, 31 votes were needed for the majority to pass the proposal. The representative for Non-Autonomy Conference commissioners and the representative for FCS Conference commissioners abstained from voting. 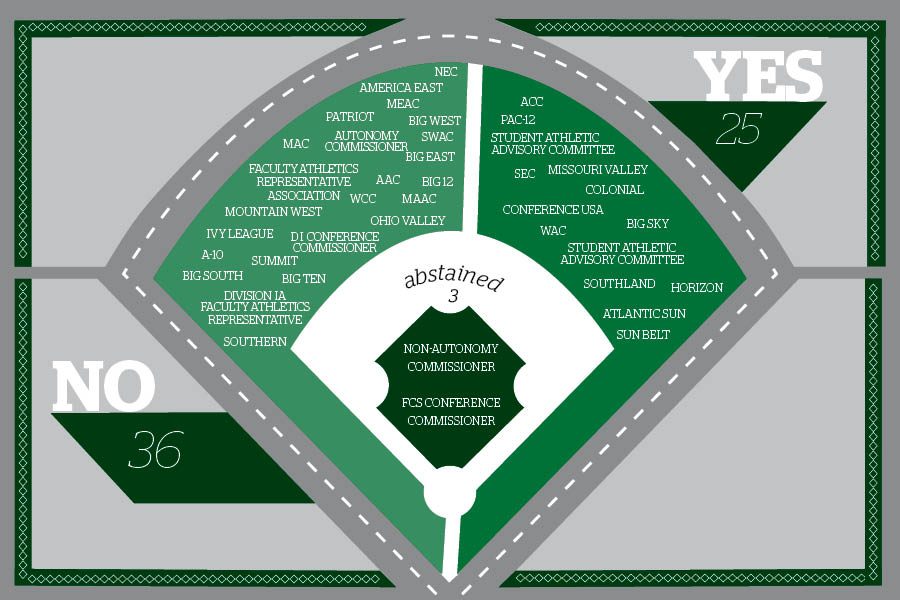 According to reporting by Kendall Rogers of D1Baseball.com, some representatives voted “no” despite their conference athletic directors voting “yes” beforehand. This is similar to if a member of the Electoral College voted against the wishes of their state electorate.

There have been no official statements about the vote from those at the meeting. The Daily reached out to Blake James, the chairman of the Division I Council, twice for comment — first on the day the outcome of the vote was announced, and then after the exact totals were released. Both times, James — who is also the athletic director at Miami — declined to comment.

Northwestern head baseball coach Spencer Allen declined to comment on the vote when asked on April 23. In February, he said he hoped the proposal would pass, but understood the need to consider the entire athletic department.

“As a coach, you’re always looking to move your sport forward,” Allen said Feb. 19. “I think the biggest thing to me is it’s like running a business, right? And I understand just where we’re at in the big scheme of things.”

Northwestern softball head coach Kate Drohan said she did not know enough about the proposal to talk about it.

On Twitter, Gano retweeted a tweet by Indiana volunteer assistant baseball coach Casey Dykes that called the results of the vote “embarrassing and disappointing.” Napoleon liked the same tweet and responded to it with “Casey, well said.”

To: Those who voted “No” pic.twitter.com/SIKW01rdFM

“If we are on the rise and have a lot of income coming in the softball world, so then why can’t we afford to pay our coaches at specific schools,” Shellmyer said. “I get it, maybe a lot of schools can’t afford their third coach, but we probably could.”

Reaction across the country

In the Big Ten, the most vocal coach in support of the proposal is Indiana’s Jeff Mercer.

Mercer, who is in his first year at the helm of the baseball program, had originally expressed his desire to get the proposal passed in February. After the news was announced two weeks ago, Mercer tweeted his disappointment and also talked about it with the press, calling the decision “absolute hogwash.”

Across the SEC, coaches in both sports vehemently voiced their opinion on the topic. Tim Corbin, Vanderbilt’s head baseball coach, said the decision was “gross.”

“This is a need position for the sport to grow and the fact that it failed just infuriates me,” Corbin said on SEC This Morning. “I can’t even get it over it really. It sickens me.”

Arizona State head baseball coach Tracy Smith, who was the head coach at Indiana from 2006-2014, called the decision “another slap to the sport.” On the other side of The Copper State, Arizona head softball coach Mike Candrea told the media he thought the proposal was going to pass easily and did not like the result.

“Here’s the hard part, someone is volunteering their time yet you can’t do anything for them,” Candrea said. “To me, at least meet us halfway where you can open it up a little bit and allow us to do some things for the volunteer coach. It just doesn’t make sense to me.” 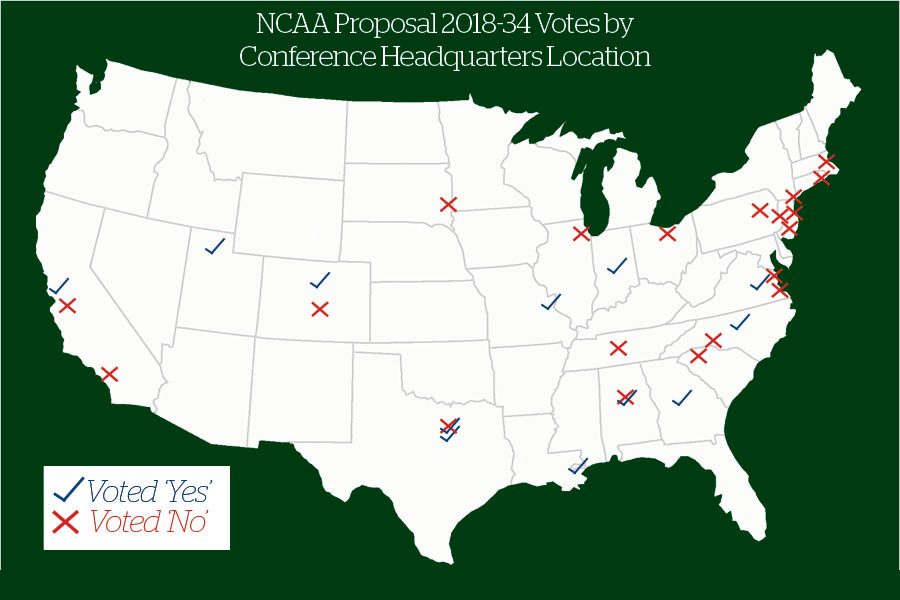 Players also spoke out about their experiences with volunteer assistant coaches and their thoughts on the amendment. Jake Burger, a two-time All-American at Missouri State who was selected No. 11 overall in the 2017 MLB Draft, was one of them.

Burger told The Daily that the unpaid coaches he worked with in college — Matt Lawson and Joe Lincoln — were two most important people in his baseball career.

While with the Bears, Burger said he was able to confide in Lawson and Lincoln for both on-field and off-field matters. This past year, Burger even lived at Lincoln’s house while he was in the area. Burger — who is currently in the Chicago White Sox minor league system — added that he considered Lawson and Lincoln his on-campus parents while in college and they showed “him the path.”

“I know I’m not the only guy that they impacted their careers gratefully,” Burger said. “I literally can’t express enough how upset I am with (the vote).”

Looking forward to the future

Following the decision, the movement to add third assistant coach will have to be pushed to the side for the time being. Proposals that are defeated at the NCAA Division I Council are not allowed to be brought back for a vote until 2022.

And if a similar amendment does find its way back to the Council, it may be strictly baseball-only.

Administrators — including Oregon State athletic director Scott Barnes and Texas athletic director Chris Del Conte — said they supported the baseball side of the proposal, but not the softball side. Del Conte said the need for a third full-time assistant coach in softball had not been vetted enough, while Barnes told The Oregonian/OregonLive he wants to look at softball separately.

During this interim period, other baseball and softball proposals and referenda may be brought to the table.

The issue most likely to rise up in place of the third assistant coach debate is scholarships. Baseball is allocated only 11.7 scholarships for 35 players. For years, college baseball supporters have been hoping for the allotment to increase.

Texas Tech athletic director Kirby Hocutt, who was against NCAA Proposal 2018-34, said on his radio show he was in favor of a “broader” discussion of improving the game, and scholarships are the place to start. Nebraska head baseball coach Darin Erstad echoed that statement, adding on Huskers Extra that if money is going to be put into college baseball, he would like to see it start with scholarships.

Southland Conference commissioner Tom Burnett told The Daily that he had heard rumblings in the days leading up to the vote that it was not going to pass. The Southland had been “overwhelmingly” in favor of the proposal.

He said he expects another proposal to be voted on soon.