The Daily Northwestern • May 8, 2019 • https://dailynorthwestern.com/2019/05/08/opinion/shirola-mass-restrictions-on-opioid-prescriptions-are-unnecessary-and-unethical/

Shirola: Mass restrictions on opioid prescriptions are unnecessary and unethical 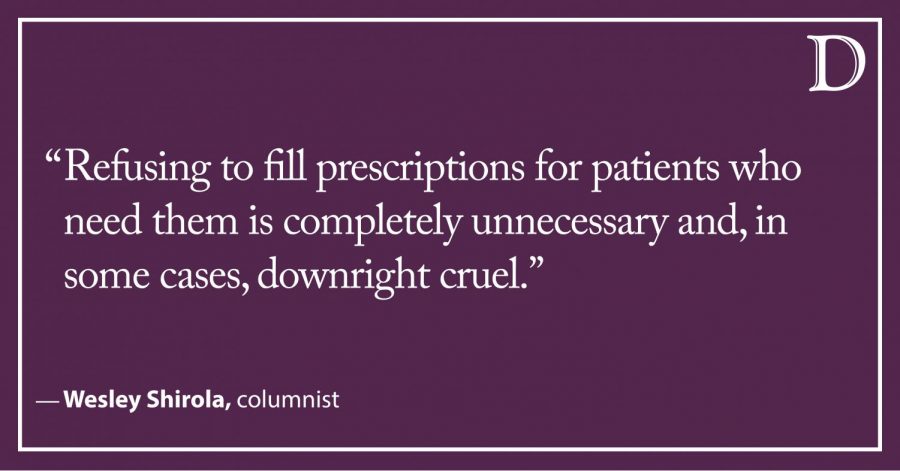 This is the second column in “Failed Policy,” a series examining the history of drugs and drug policy in the United States since its founding.

In 2017, the U.S. Department of Health and Human Services declared a public health emergency in response to the opioid crisis. The Centers for Disease Control and Prevention (CDC) estimates that more than 130 people in the United States die every day from an opioid overdose. Opioids have been around in the U.S. for over 200 years, but widespread addiction has only recently been proclaimed a public health emergency.

As a result, the CDC designed non-mandatory prescription-practice guidelines for primary care physicians, but many states have placed significant additional restrictions on the prescribing of these drugs in an attempt to reduce their overuse and abuse. Yet, while a serious epidemic clearly exists in the U.S., heavily restricting access to opioid medications when patients are in need is not the answer. The many patients who need these drugs to live comfortably should not have to find themselves facing high barriers to get them.

At the Interim Meeting of the American Medical Association in 2018, the organization’s president, Dr. Barbara McAneny, shared a heartbreaking story. She had prescribed an opioid medication to one of her patients who was suffering from debilitating pain due to prostate cancer that had spread to his bones. The patient’s pharmacist called him a “drug seeker” and refused to fill the prescription. Feeling ashamed, the patient went home, hoping to endure his pain. Three days later, he tried to kill himself but was saved by his family. This story illustrates precisely why placing severe limits on prescription opiates is harmful to patients.

Today, it is illegal in a majority of U.S. states for patients in acute pain from surgery or an injury to fill an opioid prescription for more than three to seven days, regardless of the severity of their surgery or injury. I experienced this firsthand the summer before entering Northwestern. I had major surgery and was given a five-day prescription for an opioid which significantly reduced my pain. After I ran out, however, I was still in debilitating pain and not yet fully recovered. That didn’t matter to the clinic and the pharmacy, however. Worried that I would become an addict, they left me to suffer.

Refusing to fill prescriptions for patients who need them is completely unnecessary and, in some cases, downright cruel. Estimates vary, but most research has found that 8-12 percent of patients prescribed an opioid develop an opioid use disorder. The actual number of patients that become addicted to opioids, however, is likely even smaller when you consider the breadth of cases covered by the term “opioid use disorder.” In fact, a patient can be labelled as having an opioid use disorder for simply meeting two criteria on a far-reaching checklist, such as taking more than the prescribed dose and having the desire to take more. In my opinion, these patients aren’t “addicted” in the traditional sense of the word. Thus, it is entirely possible that the scope of the opioid crisis is largely inflated.

Opioids have been prescription-only in the U.S. since the Harrison Narcotics Tax Act of 1914, but they have been around in the U.S. since before the country’s founding. While addiction has always been prevalent, it has only become a crisis in the past 25 years or so after several pharmaceutical companies, including Purdue Pharma, the maker of OxyContin, spent hundreds of millions of dollars marketing new, more powerful opioids — OxyContin among them — that packed way more drug into any one pill due to “timed release” mechanisms.

Clearly, not all opioids are created equally, and the opioid crisis takes on a whole new light when this is taken into account. While the number of overdose deaths per year from traditional prescription opioids since the introduction of OxyContin has increased fivefold, the number of deaths per year from synthetic opioids — such as fentanyl — increased nearly tenfold. Furthermore, most of the growth in the death rate from synthetic opioids happened only within the last decade.

What to do about the opioid crisis is highly debated among physicians, pharmaceutical companies, governments and public health experts. One thing is clear, however: Restricting or banning the prescription of opioids by licensed physicians for patients who need them is unnecessary and unethical. Some regulation is no doubt necessary. But we shouldn’t allow the minority of patients that switch from a doctor’s prescription to stronger and illegal street opioids to prevent those patients who actually need these prescriptions from receiving them. The solution to the opioid crisis is not likely to come anytime soon. In the meantime, more good than bad can be done by allowing patients with pain to receive the treatment they need to live their lives. It is simply immoral not to.

Wesley Shirola is a Weinberg sophomore. He can be contacted at [email protected] If you would like to respond publicly to this column, send a Letter to the Editor to [email protected] The views expressed in this piece do not necessarily reflect the views of all staff members of The Daily Northwestern.