The Daily Northwestern • May 8, 2019 • https://dailynorthwestern.com/2019/05/08/ae/the-monthly/inside-bachelor-nations-diversity-problem/ 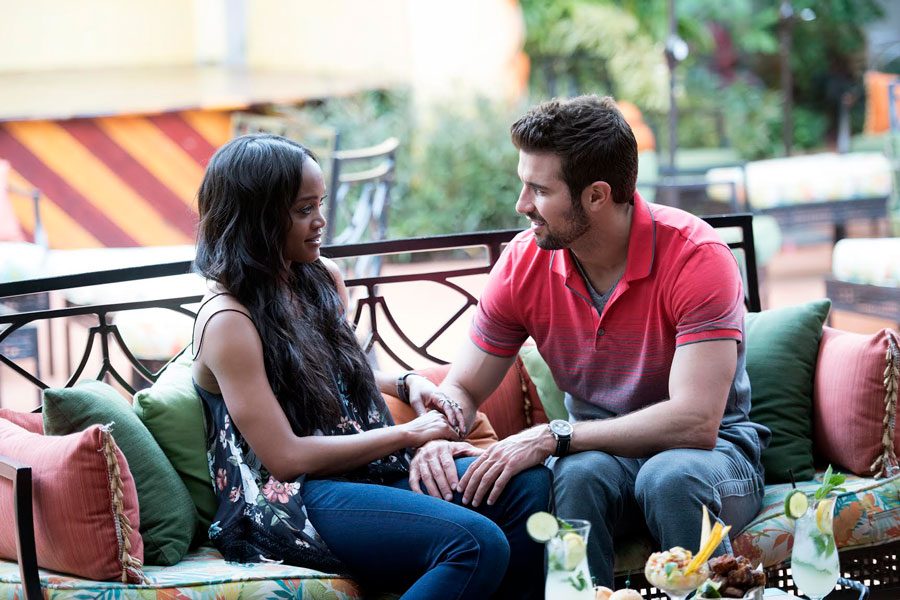 Former Bachelorette Rachel Lindsay with winner of the show and fiancé Bryan Abasolo. Lindsay said she doesn't think the franchise will see another African American woman as the Bachelorette anytime soon.

As Bachelor Nation gears up for Hannah B.’s Southern-belle season of “The Bachelorette” on May 13 (I’m predicting at least four mentions of ‘Roll Tide’ in the premiere alone), fans have started reminiscing about the last time we saw Hannah — as an awkward and goofy charmer in Colton Underwood’s season of “The Bachelor.” As a season with many fan favorites — including Demi, Hannah G., Tayshia and Caelynn — we’ll most likely see more of the girls on the upcoming season of “Bachelor in Paradise,” but as a recent Twitter post pointed out, Colton’s ladies of color have not all received the same recognition as their white counterparts.

Whispers about the show’s lack of support for diversity are not new. The franchise faced a class action lawsuit in 2012 after two hopefuls claimed they were turned away from the casting process because of their race. It took 17 seasons of “The Bachelor” for producers to select its first minority lead — Venezuelan Juan Pablo Galavis — though the choice was criticized because Galavis is white-passing (and also the WOAT). In 2017 Bachelor Nation rejoiced the announcement of Rachel Lindsay as its first black showrunner in 33 seasons of “The Bachelor” or “The Bachelorette.” However, her run was supposedly announced earlier than usual so she could get more Instagram followers and the show could get attention for its “diverse” pick — to no advantage, considering her season’s ratings were lower than those of former white counterparts.

Lindsay acknowledged this phenomenon when speaking to Us Weekly about Monday’s Bachelorette contestant reunion special, which featured 12 of the show’s 14 previous stars. She said she was saddened by the lack of diversity in past seasons, which was reflected in her being the only woman of color in the room. She told the magazine last year she does not think the franchise would see another African-American woman as the Bachelorette anytime soon.

In the years that have followed Lindsay’s season, “Bachelor” host Chris Harrison said a “concerted effort” has been made to make the cast of the show more inclusive. However, the (meager) attempts at diversifying have not been reflected within fans’ engagement with the stars, specifically on contestants’ social media accounts. For example, the top four contestants of color from Colton’s season all have lower Instagram follower counts than the white contestants. They have also received some of the lowest growth in their follow counts. Even Bachelorette Lindsay has reduced follower counts compared to her white counterparts.

These lower follower counts can result in fewer brand deals, television spots and continuing revenue after the show for these contestants, which can make a difference. Mediakix estimates that, with an average of seven to eight sponsored posts per month that can earn between $5,000 to 15,000 each, Bachelor influencers with fewer followers can earn approximately $444,000 a year, while those with higher numbers can rake in between $888,000 and $1.33 million per year.

The Bachelor is massively popular — season finales regularly garner millions of viewers, even after 23 seasons of “The Bachelor,” soon-to-be 15 seasons of “The Bachelorette” and countless other spin-offs. This is a huge platform for the show’s producers, and they could be using this audience to promote and inspire diversity and inclusion across Bachelor Nation. But they haven’t, and therefore fans haven’t either. And these lower social media followings aren’t just virtual meaninglessness — they’re warnings that tell the show’s producers contestants of color just aren’t popular. Does it mean women like Rachel, Tayshia, Kirpa, Katie and Sydney were all somehow less likable, intelligent or beautiful than the other contestants? No, of course not.

It’s clear Bachelor Nation has a diversity problem. In recent years, the show has tried to diversify — some say not enough — but fans have not lauded this effort. And it shows in how producers have selected this spring’s men: on Hannah B.’s upcoming season, only seven of 30 contestants are men of color. If there is not a loud conversation happening amongst all viewers, not just those who hold marginalized identities themselves, the show has no incentive to diversify their casting. And so the cycle continues.

Although — and because — the show means a lot to fans, members of Bachelor Nation, myself included, need to uplift contestants of color who are just as likable, intelligent and beautiful as their white counterparts. We should reward them for putting themselves out there and looking for love on the show. At the same time, we should vocally encourage showrunners to prioritize inclusion when choosing new contestants, or else the problem will never be solved.

So go follow your favorite hunk on Hannah B.’s upcoming season of The Bachelor, because it matters more than you know.