The Daily Northwestern • May 7, 2019 • https://dailynorthwestern.com/2019/05/07/sports/womens-tennis-wildcats-fall-to-princeton-in-first-round-of-ncaa-tournament/

Women’s Tennis: Wildcats fall to Princeton in first round of NCAA Tournament 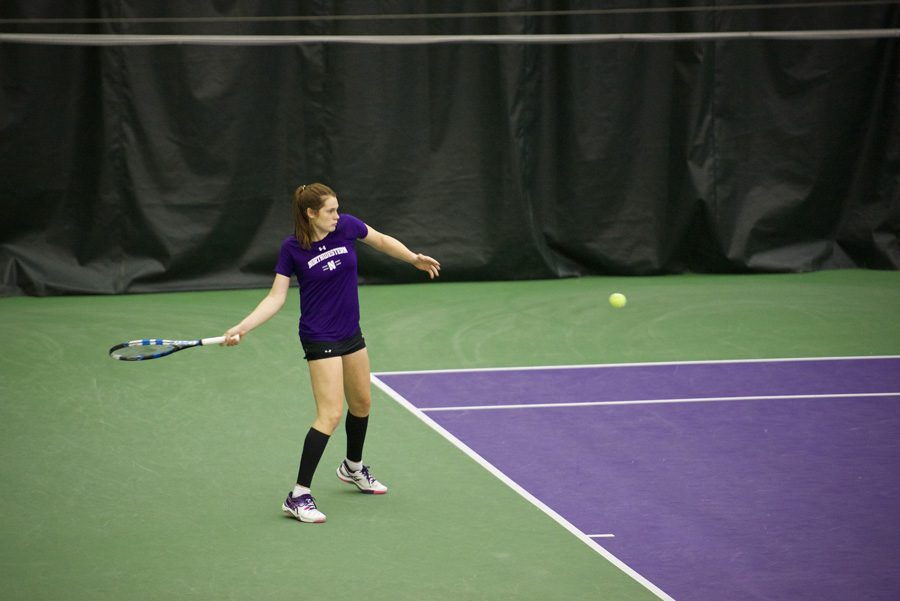 Julie Byrne hits the ball from the back. The junior was the only Wildcat to win in singles play in an NCAA Tournament loss to Princeton on Friday.

This year’s postseason has been a tough one to navigate: After losing to Michigan in the Big Ten Tournament last week, Northwestern was stopped in the first round of the NCAA Tournament by No. 34 Princeton on Friday afternoon.

Had it won, NU would have gone on to face Washington in the second round.

Coming into the match, Northwestern was 3-1 all-time against the Ivy League school. The universities last met during the Wildcat Invite in October.

The Cats felt the absence of their No. 1 singles star, freshman Clarissa Hand, who missed the match due to illness. Hand had played all but one of NU’s dual matches this season in the top spot, and was named the Big Ten Co-Freshman of the Year just a day before the Cats played in Seattle.

The Tigers built a 1-0 lead to start, taking the doubles point to open play. Freshman Hannah McColgan fell in two sets at No. 5 singles at the start of individual play, and Princeton increased its advantage to 2-0.

All-Big Ten junior Julie Byrne had NU’s lone singles win of the day in straight sets 6-3, 6-3 at No. 1 against Stephanie Schrage. However, this momentum wasn’t enough for the Cats, as Princeton grabbed the two clinching wins of the day at the No. 3 and No. 4 singles spots.

Every finished match decision was in straight sets.

The Cats’ first-round exit was their earliest in the NCAA Tournament in at least 15 seasons.

Hand is still set to play in the upcoming NCAA Singles Championships, held in Orlando, Fla. from May 20 to 25.