The Daily Northwestern • May 7, 2019 • https://dailynorthwestern.com/2019/05/07/sports/baseball-two-pitchers-have-career-best-games-in-series-win-over-nebraska/ 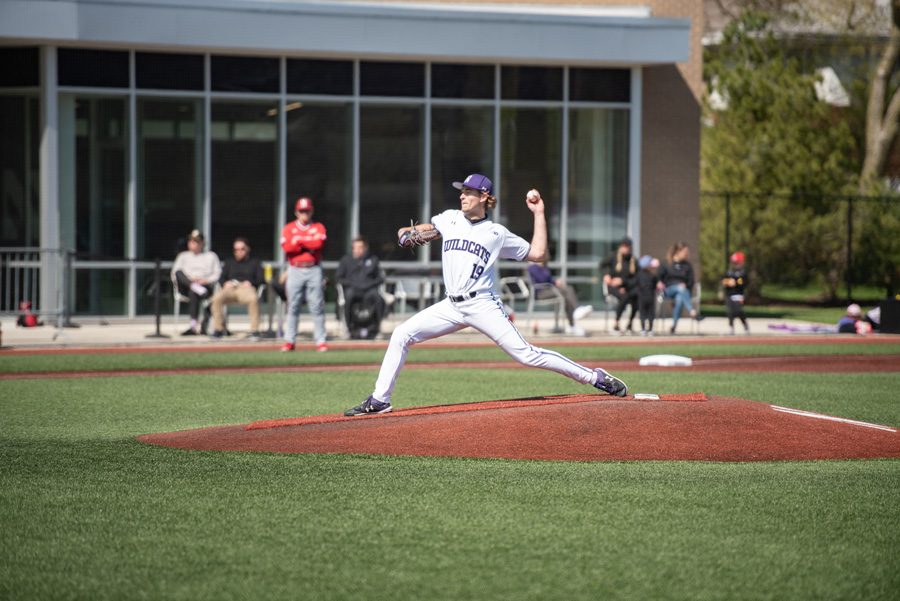 Ryan Bader throws from the mound. The sophomore pitched seven scoreless innings in game one of NU’s series win over Nebraska this weekend.

Before Saturday, Ryan Bader had never started the opening game of a series and competed against the opposing team’s best starter this season. So when coach Spencer Allen told the sophomore this week he’d be the ace for this weekend’s series against Nebraska, he called a trusted source for tips on how to outduel the Cornhuskers’ Matt Waldron.

Bader reached out to Jacob Campbell, a freshman catcher at Illinois, who said Bader should start a count with a fastball outside and follow that up with change-ups away from the batter. Bader had just one quality start in his college career — after talking with Campbell, the lefty had a plan to attack the third-best scoring Big Ten offense in conference play this season.

It worked: Bader pitched seven scoreless innings to lead Northwestern to a 4-2 win against Nebraska in the series opener. The Wildcats (21-23, 8-10 Big Ten) went on to win another and clinch the upset series victory over the third-place Cornhuskers (24-18, 13-8) on Sunday, putting themselves in position to qualify for the eight-team Big Ten Tournament.

“I was glad to just get the chance to go out there and compete and try to do my best,” Bader said. “I had a good idea of a couple of guys and how I wanted to pitch to them, but overall I stuck to our plan and what I’m good at and executing my pitches.”

If everyone were healthy, Bader wouldn’t have received the opportunity to pitch that gem on Saturday. Sophomore Quinn Lavelle and junior Hank Christie have been the top two starters over the last two seasons, trading series opening starts between each other.

But Lavelle and Christie weren’t available this weekend, so Allen shuffled his rotation. After Bader, who had been the third option in the rotation, started the first game, Allen used depth pieces Mike Doherty and Parker Hanks to start the other two.

Doherty had the best start of his career as well this weekend, pitching five innings of one-run baseball on only two hits in Sunday’s 10-2 win. Senior shortstop Jack Dunn had four hits and three RBIs in that game to fuel the offense, culminating a dominant three-game stretch last week that earned him the Big Ten Player of the Week honor.

“He’s been that way all year for us,” Allen said. “He’s hitting a crazy average (.575) with runners in scoring position, so it’s really fun to watch.”

Despite Hanks giving up only two runs and four hits in four innings in the series finale, NU’s bullpen gave up four more runs, and the Cats lost 6-4 on Monday. NU was trailing 4-1 in the sixth inning when senior outfielder Ben Dickey struck out looking and Allen stormed out of the dugout to challenge the called strike.

Within seconds, Allen was tossed from the game in an effort “to fire the team up,” but it nearly worked as the Cats scored two more in the ninth and put the winning runner on plate in a late-game rally that came up just short.

Dunn said the players received that message well and despite Monday’s loss, the team showed the effort it needs to reach its preseason goal of making the Big Ten Tournament. Now sitting tied for eighth place in the standings, he said the team put itself in a better position to make that happen this weekend.

“We knew he had to win two out of three or sweep this series,” Dunn said. “Then (Monday) we fought back today in the later innings just seeing the fight, it’s a really good sign going forward with seven games left.”