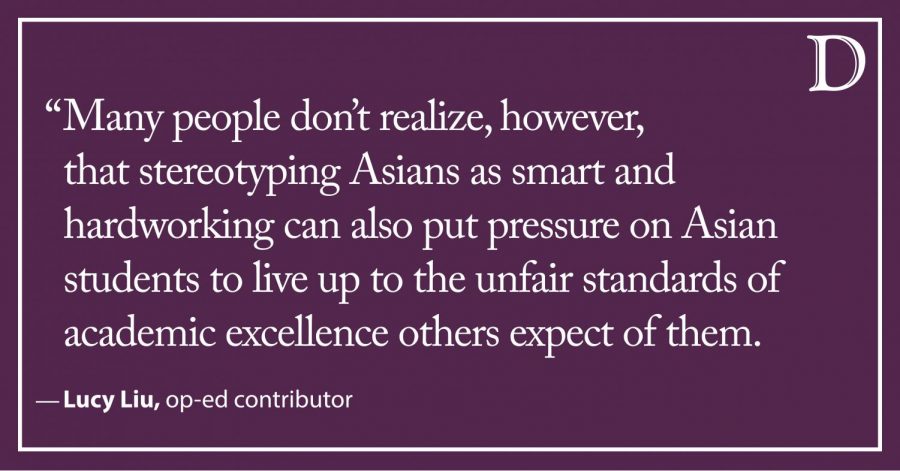 As I clicked through a survey for my sociology class at Northwestern on inequality, one of the questions asked, “What percentage of your zip code would you estimate is each of the following?” The categories presented were “White or Caucasian,” “Black or African American,” “American Indian or Alaskan Native,” and “Hispanic or Latino.”

Looking through the options, I wondered why “Asian” was not one of the categories. I found it ironic that a survey for a class called Social Inequality didn’t acknowledge such a prevalent race. Despite the misconceptions that Asians are not subject to discrimination in the U.S., the Asian community does, in fact, encounter discrimination, which can often be overshadowed by the model minority stereotype.

While over half of the world is Asian, we are a minority in the United States at 5.8 percent of the population, as of 2018. Additionally, many Asians face a unique stereotype — the “model minority.” Asians are categorized as smart, wealthy, hardworking and obedient. They are seen as successful people who do well in society and have overcome the burdens their race has faced on their own — often pointed out to detract from other racial minorities.

Many people don’t realize, however, that stereotyping Asians as smart and hardworking can also put pressure on Asian students to live up to the unfair standards of academic excellence others expect of them. These tensions can instill self-esteem issues and increase stress for Asian Americans, especially within academic and work settings. Many may brush over this stereotype because calling someone smart and hardworking doesn’t initially appear to be negative.

In addition, the model minority disregards the social diversity of Asians from South, Southeast and East Asian countries. According to the Pew Research Center, U.S. Asians have a wide range of income and education levels. While 72 percent of Indian Americans hold a bachelor’s degree, for example, only 9 percent of Bhutanese Americans can say the same. As a result, this dominating “positive” image of Asians all being highly educated overshadows other forms of discrimination — name-calling, prejudice, harassment. People don’t realize that Asians face and have faced forms of discrimination like other minority groups.

Asians have faced great amounts of oppression throughout American history. The Chinese Exclusion Act of 1882 prevented Chinese immigrants from finding their own American dream. Anti-Chinese policies persisted until 1943 in the interests of gaining an allied force for World War II. For over 60 years, the United States continued to create obstacles through additional anti-Chinese policies. While the Statue of Liberty was gifted to the US, eventually becoming a symbol of hope and freedom for immigrants around the world, [CQ] Chinese Exclusion Acts were not repealed until 57 years after the statue’s dedication.

In 1942, President Roosevelt signed an executive order to relocate all Japanese Americans to internment camps. Two-thirds of the interned were born in the United States, many had never been to Japan and some were veterans of World War I. After the order was repealed, many Japanese Americans couldn’t return to their hometowns. This part in US history remains a violation of civil liberties and further demonstrates a history of Asian discrimination in the United States.

As a Chinese-American myself, I have grown up experiencing stereotypes of the model minority as well as discriminatory insults. In elementary school, a boy came up to me and asked if I ate dogs and scorpions and didn’t believe me when I said no. I was appalled that he asked me that because I wasn’t even aware that some parts of China actually ate dogs and scorpions at the time. I started to become aware of Asian stereotypes at a young age, and they’ve haunted me throughout my life.

During my freshman year of high school, I was walking down the hallway when a tall, white senior yelled “Ching chang ting tong” at me. His girlfriend quietly giggled and said, “Don’t say that!” Having just moved to Rye, New York, a couple of weeks before school started, I was taken aback by his comment because I didn’t expect a high school known for its good education in an affluent area to still have people who were so ignorant — people who used my ethnicity as entertainment.

But my negative experiences don’t only reflect those kinds of associations — the model minority myth affected me as well. Throughout my academic career, I have heard my fair share of remarks about how I’m “obviously good at math and science” and how I “get A’s all the time” and how I’m “pre-med because my parents told me to be a doctor.”

While stereotyping is, unfortunately, a common issue across many groups, the best way to combat stereotypes is to raise awareness of their detrimental effects. Few children are taught about the dangers of overt, harmful stereotyping against groups of people. Furthermore, schools and parents rarely touch on less common forms of stereotyping — such as portraying Asians as a model minority.

The model minority obstructs society’s views on the underlying discriminatory actions that affect Asian Americans. People shouldn’t overlook the painful history of Asian Americans, the nuances of experiences people from different regions face, and the derogatory remarks toward Asians just because Asians have been stereotyped as smart and hardworking. While the stereotype might not seem harmful at first, associations like these are still ultimately negative and have a harmful effect on wider communities.

Lucy Liu is a Weinberg first-year. She can be contacted at [email protected] If you would like to respond publicly to this op-ed, send a Letter to the Editor to [email protected] The views expressed in this piece do not necessarily reflect the views of all staff members of The Daily Northwestern.