The Daily Northwestern • May 7, 2019 • https://dailynorthwestern.com/2019/05/07/lateststories/despite-low-enrollment-northwesterns-rotc-program-prepares-students-for-military-careers/ 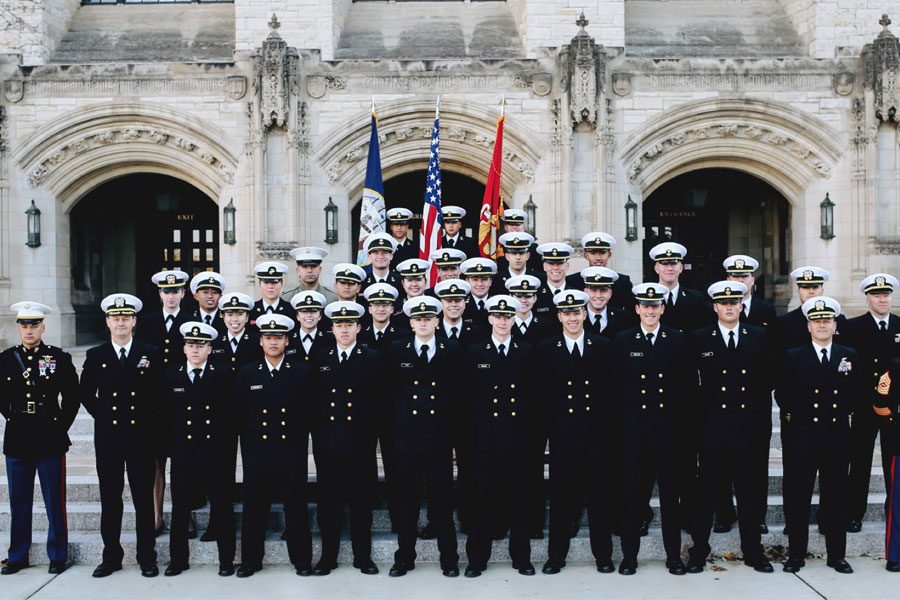 NU’s NROTC unit is described by midshipmen as a tight-knit, supportive community. The program is quite demanding, consisting of 5 a.m. wake-up calls and early morning physical training year-round.

Every morning at 5:30 a.m., Weinberg junior Daniel Witte wakes up and shaves. It’s “the rule,” he said. The midshipman — which refers to students enrolled in the Naval Reserve Officers Training Corps — walks from his dorm to Floyd Long Field for physical training, followed by a naval science class. Then, he has a full day of Northwestern classes.

By 4:30 p.m., Witte has been awake for 11 hours. But he still has plans left in his day. Sometimes Witte goes to Model United Nations, and other times he heads to the library to study. Witte usually goes to sleep around 10 p.m. so he can be well-rested for the next day’s wake up call.

For Witte and his fellow midshipmen, this is their day-to-day routine. He says it’s challenging and takes a lot of self-discipline. But overall, Witte believes it is worth the commitment.

“My dad was in the Army, and that was a big influence on my choice to join the military in general,” Witte said. “The Navy provided me with the best opportunities. It’s really developed me as a person.”

The Reserve Officer Training Corps is a program on college campuses that prepares students to become officers in the U.S. military and guarantees them a post-college career. NU’s ROTC program is a Navy unit, NROTC. It specifically trains midshipmen to take jobs in the Navy or the Marine Corps.

NU’s NROTC unit was one of the original six established by the Navy across U.S. college campuses in 1926. At one point, NU’s NROTC program comprised of hundreds of students, said Capt. Christopher Adams, NROTC Chicago’s commanding officer. But this school year, there are only 35.

“Having 35 students in our battalion is historically low,” Adams said. “So much of our demographics for a given class is affected by Northwestern University’s admissions process.”

McCormick sophomore Dylan Utterback said low enrollment numbers have some benefits, though. He described this year’s group as a “small, close-knit and supportive environment,” especially because he is one of two sophomores in NROTC.

Utterback said he applied because he wanted a “meaningful career,” as well as opportunities to travel. The NROTC scholarship pays tuition and books, as well as a monthly stipend. Anyone can join the program up until the end of their sophomore year, whether they are on scholarship or not.

“I find meaning in serving my country,” Utterback said. “I feel like there’s a lot of evil out there and I’d like to be a part of bringing justice to people who can’t fight for themselves.”

After acceptance into the program, Lt. Douglas Michael Ragsdale, assistant professor of naval science at NU, said midshipmen must meet specific requirements to stay in the program. They have to pass the minimum physical requirements for Navy standards — which involves running, pushups and sit-ups — maintain a minimum 2.5 GPA and show that they are willing to take on leadership positions.

NROTC does not stop when NU breaks for summer recess either. Midshipmen take part in summer engagements — the specific activities depend on students’ grade level, but each gives midshipmen insight into different branches within the Navy.

Weinberg junior Margaret Maddox participated in CORTRAMID the summer after her freshman year. CORTRAMID is a four-week event during which midshipmen gain experience in the four major warfare communities of the Navy: surface warfare, submarines, aviation and the Marines. Maddox said it was an “incredible experience.”

“CORTRAMID taught me about the diverse opportunities in the Navy and military,” Maddox said. “I also found people that I truly meshed with. It was unforgettable.”

Beyond their NROTC duties and academic obligations, midshipmen are encouraged to participate in extracurricular activities. Utterback is on NU’s varsity wrestling team, Witte is a member of NU’s Model UN team and Maddox is an RA.

“Initially, it’s really difficult to balance everything on top of ROTC and class,” Maddox said. “But after freshman year, you begin to figure out a schedule that works for you.”

In addition to the University’s NROTC program, some NU students are affiliated with the Army ROTC program, which has its flagship office at Loyola University Chicago. Djimitri Francois, a recruiting operations officer for the program, explained that Army ROTC is similar to NROTC’s program, but that instead of working towards being in the Navy, Army ROTC gives cadets the “full-blown Army experience.”

Weinberg senior Jonathan Randell enrolled in the Army ROTC as a freshman. He leaves his apartment at 5:15 a.m. because he does his physical training and takes military science courses at Loyola. While balancing school work with Army ROTC is difficult, Randall said he wouldn’t have it any other way.

“ROTC has done a lot to build my discipline and leadership skills,” he said.

Upon graduation from Northwestern, midshipmen become commissioned officers in the Navy and are officially on active duty. In the Army ROTC, some cadets join the Army Reserve or National Guard, while others are selected for active duty.

In October 2019, during her senior year at NU, Maddox will get her service assignment, which spells out her duties for the Navy post-graduation. She said she would be happy as a pilot or intelligence officer.

Reflecting on her past few years with ROTC, Maddox said she appreciates everything the program has taught her. She looks forward to upcoming opportunities and identified one lesson as the biggest thing she will take away from her experiences.

“I’ve learned that it doesn’t matter where you are, or what you’re doing,” Maddox said. “Everything in life comes down to the people that you’re with. The rest is just extra.”