The Daily Northwestern • May 6, 2019 • https://dailynorthwestern.com/2019/05/06/sports/lacrosse-northwestern-captures-first-big-ten-championship-in-win-over-maryland/ 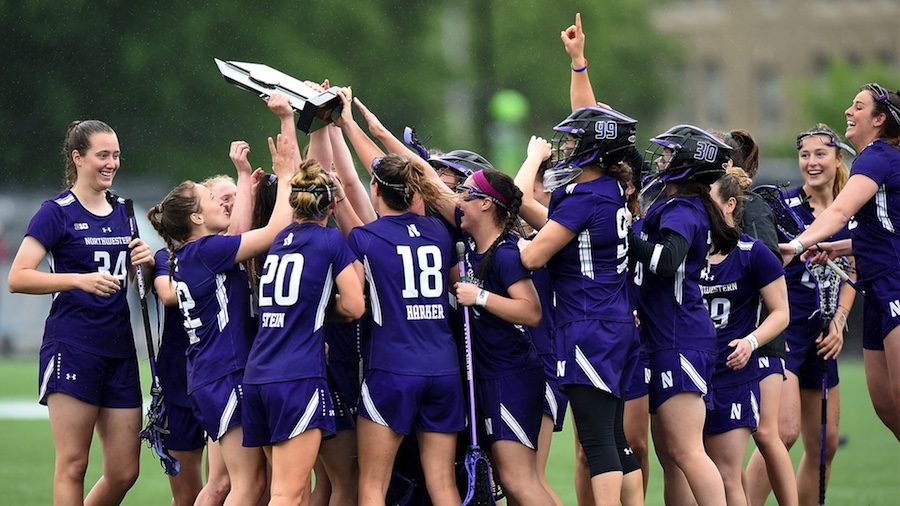 The Wildcats celebrate. NU won its first-ever Big Ten Tournament crown in an upset over Maryland on Sunday.

Northwestern has conquered its giant.

After eight consecutive losses to Maryland since joining the conference before the 2015 season, the No. 5 Wildcats toppled the No. 1 Terrapins 16-11 on Sunday to capture their first Big Ten Championship in program history.

Maryland (18-1, 7-1 Big Ten) came into the game with an undefeated record alongside a top-10 scoring offense and defense. The Terrapins had beat the Cats (14-4, 7-1) 17-13 earlier in the season after a rain delay caused the game to be moved indoors to Ryan Fieldhouse from Martin Stadium.

Freshman attacker Izzy Scane ignited NU from the start of the game, scoring the first two goals within four minutes. Scane also capped off a 5-0 Cats run at the end of the first half, scoring off a sloppy Maryland turnover.

Scane suffered a twisted ankle in the Cats’ semifinal win Friday against Michigan, but was able to play through the pain Sunday. Scane finished the championship game as one of four attackers who scored three or more goals.

Joining Scane on the offensive effort were attackers Lindsey McKone, Lauren Gilbert, and Selena Lasota. The trio combined for ten goals. Lasota scored four on her own — continuing her streak of 12 straight games with more than 2 goals — and McKone added three for the third consecutive game.

“I think (the offense) did great,” Scane said. “We did a good of job of running our offense and finding the openings in Maryland’s defense to capitalize on a lot of open shots and finish.”

In the center of the field, sophomore midfielder Brennan Dwyer and senior defender Kim Harker totalled a whopping 14 draw controls.

NU also finished a perfect 20-for-20 in clear attempts, in large part due to Weisse. The goalkeeper’s accurate, long-distance passes spurred the pace of the Cats’ offense without causing any untimely turnovers.

“We really came out strong, and I’m proud of how we played well on the draw,” Weisse said. “Having such success coming out of the draw and then putting the ball in the back of the cage and making some plays at the end, we had a really good day.”

NU earned the No. 4 overall seed and a first-round bye in Sunday night’s NCAA Selection Show. The Cats will play the winner of  Notre Dame and Stanford in the NCAA quarterfinals.

“We worked really hard to put ourselves in a great spot,” Weisse said. “We’re excited to keep the ball rolling and hopefully we can go all the way.”