The Daily Northwestern • May 6, 2019 • https://dailynorthwestern.com/2019/05/06/opinion/augustine-the-discrimination-against-caster-semenya-is-unwarranted/

Augustine: The discrimination against Caster Semenya is unwarranted 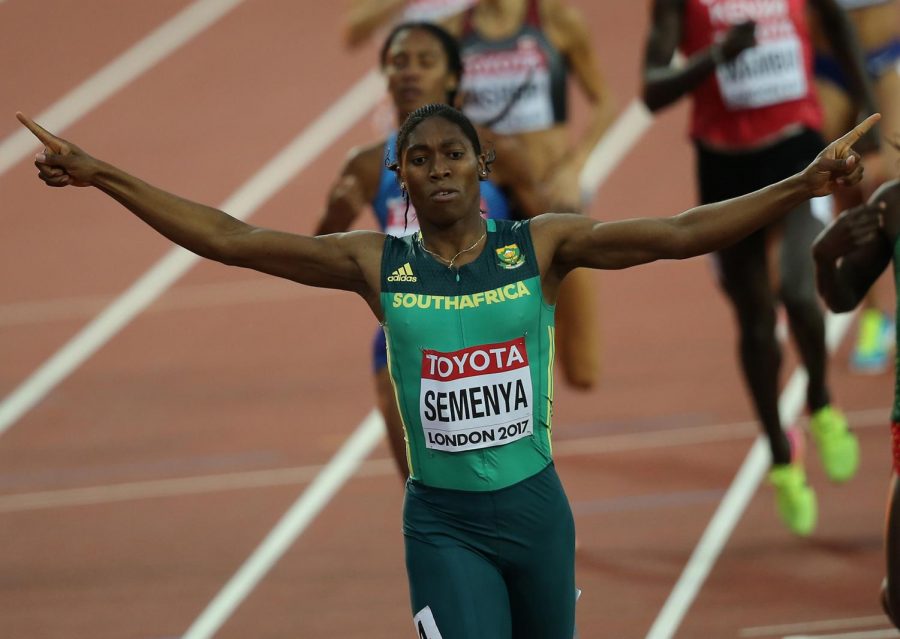 Caster Semenya of South Africa wins the women's 800m during the IAAF World Championships at London Stadium on August 13, 2017.

Olympian swimmer and gold medalist Michael Phelps is genetically endowed with a proportionally longer wingspan, larger than average hands and feet and a double-jointed chest. These seemingly arbitrary differences are all advantages for Phelps in the sport of swimming, helping him get ahead with each stroke that he takes. Beyond his heap of anatomical advantages, Phelps also produces half the amount of lactic acid — an acid produced in muscle tissue that is responsible for fatigue — as his fellow competitors.

Phelps is not alone. Olympian sprinter and gold medalist Usain Bolt stands at 6 feet 5 inches, towering over his competitors as the tallest elite sprinter in history. His longer stride, in conjunction with his high step frequency, gives him a clear-cut advantage over his competitors. Force is also a significant factor in speed, and it is estimated that Bolt strikes the ground with 1,000 pounds of force per step.

Michael Phelps and Usain Bolt are household names for their wide array of accomplishments. They are extremely well-known and serve as role models for athletes and non-athletes alike. Yet, the name Caster Semenya — a South African woman who is a two-time Olympic champion in the 800-meter race — is only uttered in reference to her naturally high levels of testosterone.

Testosterone is a hormone associated with enhanced strength and performance in the world of athletics, and Semenya’s testosterone level falls in the range of a typical male, 7.7–29.4 nmol/L. Following the new ruling set forth by the International Association of Athletics Federations in an effort to level the playing field for female athletes, Semenya will need to consume hormones to reduce her testosterone to match that of the average woman should she plan to compete in the same competition.

Justifiably, Semenya responded to this ruling with a resounding, “Hell no.”

Like Semenya, Phelps and Bolt are arguably genetically superior to their competitors. Applying the logic set forth by the International Association of Athletics Federations, Phelps should be required to physically reduce his wingspan, hands and feet, remove the second set of joints in his chest and increase the volume of lactic acid produced by his muscles. Similarly, Bolt should be required to impossibly reduce his height to that of a typical sprinter and to lessen his striking force.

And yet, the IAAF remains silent about Phelps and Bolt and there is no widespread opposition to their participation in races. This begs the question: If the IAAF is genuinely concerned with fairness, then why is their only target a black, lesbian woman?

This is no coincidence. The president of the IAAF? A white male. The ethics board of the IAAF? Seven out of ten members are male.

Banning Semenya from participating in a sport that she has dedicated herself to if she refuses to take hormones does not symbolize equality for female sports. Rather, it screams sexism and homophobia.

Looking past the glaring gender and sexuality disparity on the IAAF board, the World Medical Association has staunchly spoken out against the group classifying who biologically constitutes a female athlete. Semenya did not inject hormones into her bloodstream — her levels of testosterone are naturally elevated.

Pressuring female athletes to consume doctor-prescribed hormones inherently implies that an excess of testosterone is problematic. This, in and of itself, is discriminatory. Being hyperandrogenic — or producing high levels of male hormones like testosterone — is not tied to any health risks and there is a sense of absurdity in treating a non-issue as a pathological disease. By forcing Semenya to change a condition that is not harmful nor artificial, doctors are in fact inflicting harm on her — directly violating the ethical code that they are bound to.

Semenya has been called a man, despite her self-identification as a women. Just because she is strong and fast and does not fit the idealized mold of a biological woman does not mean that she deserves scrutiny and name-calling. Excess testosterone does not automatically equate to manhood. However, the International Association of Athletics Federations directly stated that “such discrimination is a necessary” sanction in defense of excluding Semenya as she is now.

But since when was discrimination against variables out of an individual’s control ever warranted?

Kathryn Augustine is a Medill first-year. She can be contacted at [email protected] If you would like to respond publicly to this op-ed, send a Letter to the Editor to [email protected] The views expressed in this piece do not necessarily reflect the views of all staff members of The Daily Northwestern.