The Daily Northwestern • May 6, 2019 • https://dailynorthwestern.com/2019/05/06/lateststories/womens-golf-northwestern-receives-recognition-before-the-ncaa-tournament/ 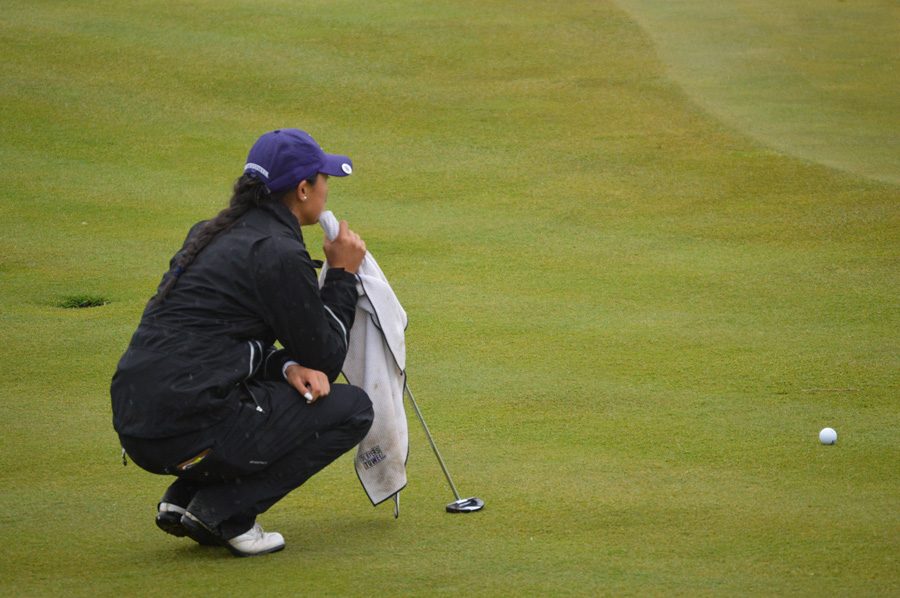 Janet Mao surveys the green. The senior is the third player in program history to receive All-Big Ten recognition in each of her four years.

After finishing the regular season ranked No. 16 in the country, Northwestern received its share of postseason recognition. Some accolades were personal and others were team-oriented, but all highlighted the fourth-seeded Wildcats’ potential at NCAA Regionals, which begins May 6 in Washington.

After leading NU with a 72.23 scoring average, senior Stephanie Lau was named Big Ten Women’s Golf Player of the Year to culminate her college career. Lau and two other golfers — junior Brooke Riley and freshman Kelly Sim — were selected to first-team all-conference, while senior Janet Mao was a second-team selection.

The highlight of Lau’s senior season came at the PING/ASU Invitational, where she shot 7-under par and earned the first title of her career. Eventually, she became the second player in NU’s history to be named All-Big Ten in each of their four years. Mao, whose best finish this season came at the Stanford Intercollegiate in October, is the third.

With four of the Cats’ five starting golfers playing at an all-conference level, they earned the highest national ranking in the conference. As the fourth seed in the Cle Elum Regional at Tumble Creek Club, NU will vie for one of six spots in the 18-team NCAA National Championships.

No. 1 USC is the top seed in the Cle Elum region, but the last time the two teams played in the same event, NU came out on top. At the Silverado Showdown in April, the Cats beat the Trojans by four shots, led by Riley’s tournament-best 1-under par.

Joining NU and USC in the Cle Elum region are No. 8 Arkansas, No. 10 South Carolina, No. 20 Washington, No. 21 Miami and an assortment of unranked teams from the Mountain West, the Pac 12, Big Ten and other conferences. The top six finishers in the three-day tournament will advance to the 2019 NCAA Championships two weeks later in Fayetteville, Arkansas at The Blessings Golf Club.

Last year in the Regionals, Riley led the team to the championship round by finishing 7-under-par, which tied her for fourth in the entire field. The Cats finished sixth in their pod, scraping to the next round as the lowest-scoring team to advance. Then at Nationals, NU was eliminated in the quarterfinals of match play, losing a close match against Stanford.

After a strong regular season, the Cats have high expectations for this postseason run. NU has already released its lineup for the tournament, featuring freshman Kelly Su, Mao, Sim, Riley and Lau. NU will tee off at 10:30 a.m. playing alongside host Washington and Miami. The weather is projected to be in the 70s throughout the three-day tournament, with zero percent chance of rain and light winds.