The Daily Northwestern • May 5, 2019 • https://dailynorthwestern.com/2019/05/05/city/women-share-stories-of-empowerment-at-gibbs-morrison-cultural-center/ 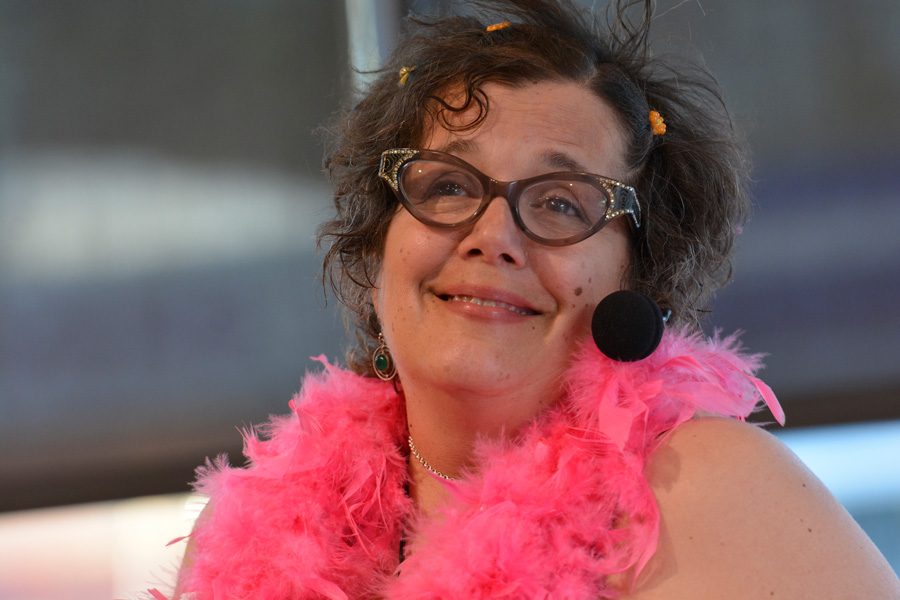 Victoria Reeves at Sunday’s Women Speak event. Reeves performed a solo show where she told stories about her life.

Women shared stories of liberation Sunday evening at Women Speak: An Evening of Empowerment and Storytelling.

The event, which took place at the Gibbs-Morrison Cultural Center, was produced by Victoria Reeves, a creativity coach and storyteller who performed a solo show during the event, “Brassy + Intrepid.” Before her hour-long performance, four other women shared stories of liberation.

R.C. Riley, a Northwestern alumna described as a “queer warrior woman” by event host and husband Johnny Price, shared a story of the impactful female relationships in her life and her relationship with her son, as part of the event.

Other women shared their stories about overcoming body negativity, the loss of a parent and the cruel treatment of an older brother. After a brief intermission, Reeves took the stage to share her own story of feminism, motherhood and life after her son’s departure to New York University.

Evanston resident Tammy Job said she came to this event because she heard Reeves perform a one-woman show before.

“They were really interesting, really well-spoken, a lot of emotion in them, a lot of levels,” Job said of the women and their stories. “I really, really enjoyed them. I thought they were fantastic.”

Reeves spent the last half of the event speaking about six moments in her life, including finding her husband, her life as an English teacher in Japan and giving birth via C-section to her son Avante. These major moments, she said, pushed her into new experiences that included communicating via an English-Japanese dictionary while she had an unplanned MRI in Japan and deciding she wanted to have a child even though she was worried she would lose herself to her child.

Reeves said she wants people to leave the event feeling like they can do whatever they want, and that limitations only exist in their minds. She said even traditional roles like being married or a mother can be done however people desire.

“A lot of women have a hard time stepping into our power and claiming our unique voices and differentiating their voices from the choir of everyone around them,” Reeves said.

After running a radio show for a few years, Reeves said she noticed some people called her brassy and intrepid, unafraid to speak her mind, and that’s how she created the name for her show.

Now, though, as a woman in her 50s, Reeves is reflecting on her life before Avante, and the 8,680,000 minutes that have gone by since her son’s birth until he left for college. Now, Reeves said, she has a free space just for herself.

Clarification: The caption has been updated to clarify the content of the show.