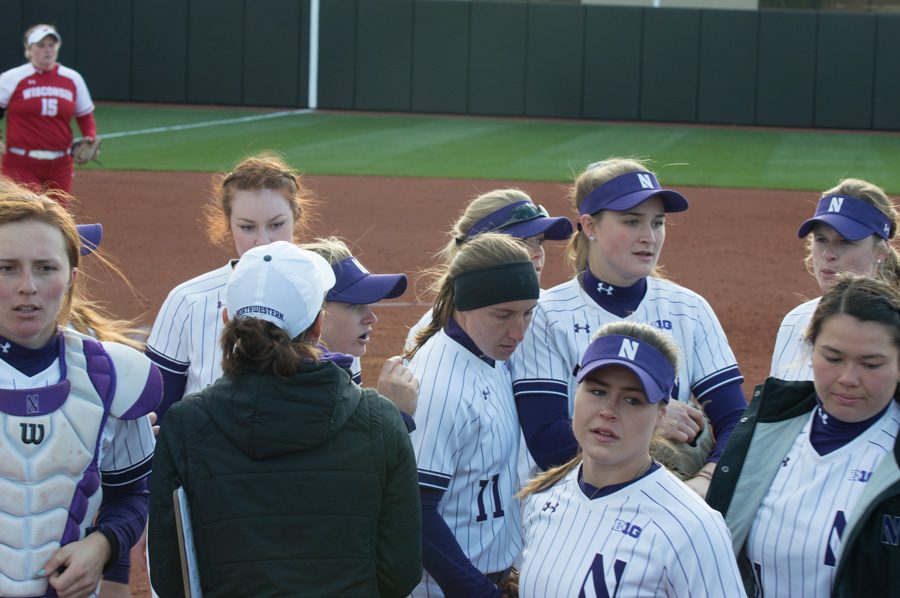 Kate Drohan talks to her team after an inning. The Wildcats head to Minnesota this weekend, trying to win their first Big Ten title in 11 years.

This weekend will be a contentious one as Northwestern heads north to play Minnesota in pursuit of its first Big Ten title since 2008.

However, Minnesota — riding its own 11-game win streak — won’t let up easily. The Golden Gophers could win the Big Ten title if they sweep the Cats this weekend and if Michigan loses a game to Maryland.

The Golden Gophers’ pitching staff will be tough to break, with a team ERA of 1.79. Junior pitcher Amber Fiser leads the staff with an individual ERA of 1.32 — the second-lowest in the Big Ten behind NU pitcher Danielle Williams.

“Fiser is probably one of the hardest throwers in our conference, so we’ve got to work to be on time and not feel hurried,” coach Kate Drohan said. “We’re working on our timing a lot, and that’s probably been the most unique area of focus right now.”

Drohan added that the key to the Cats’ success this weekend will be timely hitting and getting through tough at-bats.

She said NU has improved at this type of hitting throughout the season, especially in two-out situations.

“We’ve become a tougher out in the batter’s box, meaning I see our team battling off two-strike pitches a lot, getting rid of pitcher’s pitches, extending at-bats and really driving pitchers’ pitch counts high,” Drohan said. “That’s an area where I’ve really seen us grow.”

NU will have to bring strong pitching of its own to combat a hefty Minnesota lineup. Junior Makenna Partain will pose a threat with her .409 batting average as will freshman Natalie DenHartog with her .875 slugging percentage.

“I need to go out there with confidence like I’ve been doing these past few games, and I’ll be fine — and I think our whole pitching staff will be fine,” Wilkey said. “We work well together (and have) a lot of depth.”

She added that NU is going into the weekend focusing on itself and its own performance instead of worrying about the talent of the other team.

Though a lot is at stake for NU this weekend — the title and the potential to host NCAA regional games — Drohan said she wanted her players to take it one pitch at a time.

“As much as it’s going to play out in a really fun way for our fans and our community and people in the softball world, this is an opportunity for our team to be better,” she said. “This weekend is not the destination.”