The Daily Northwestern • May 3, 2019 • https://dailynorthwestern.com/2019/05/03/opinion/thuillier-history-is-repeating-itself-right-before-our-eyes/

Thuillier: History is repeating itself — right before our eyes 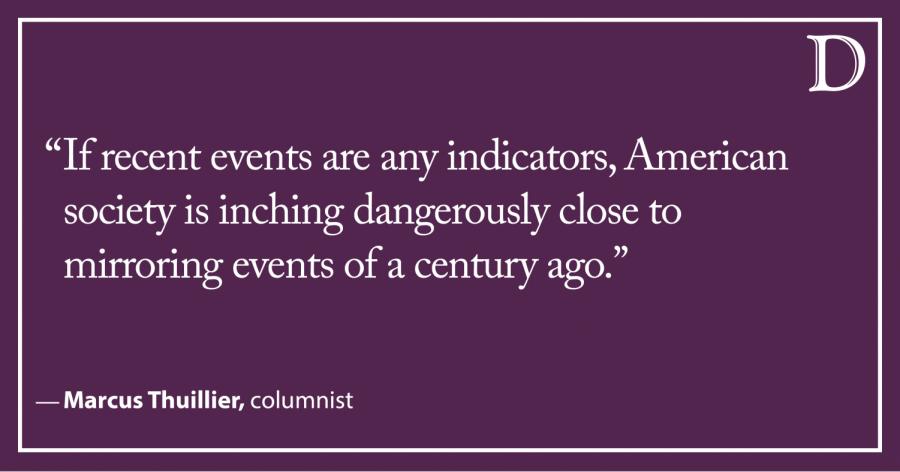 History has a tendency to repeat itself. As memory fades, events from the past can become events of the present. Some, like author William Strauss and historian Neil Howe, argue that this is due to the cyclical nature of history — history repeats itself and flows based on the generations. According to them, four generations are needed to cycle through before similar events begin to occur, which would put the coming of age of the millennial generation in parallel to the events of the early 20th century. And if recent events are any indicators, American society is inching dangerously close to mirroring events of a century ago.

Hate crime reports increased 17 percent in the United States in 2017 according to the FBI, increasing for the third consecutive year. I talked about this a little last week when mentioning a rise in LGBTQ+-driven hate crimes, but this rise in crime also marks a return to a dangerous reality. It is not just LGBTQ+ hate crime that is on the rise. 2018 saw a 99 percent increase in anti-Semitic incidents versus 2015, according to the Anti-Defamation League. When it strictly came to race/ethnicity/ancestry motivated crimes, the increase was 18.4 percent between 2016 and 2017. It is a dangerous time if you are not a cisgender, white, Christian in America, but that is not new.

A hundred years ago, in 1920, the National Socialist German Workers’ (Nazi) Party was founded in Germany. It started a generation of Germans that came of age around World War II, meaning they were young adults in 1939. I raise that point because this is where the generational theory and the recent hike in anti-semitic crime connect.

The reason this is relevant is because, in 1939, the German American Bund, “an organization of patriotic Americans of German stock,” had an “Americanization” meeting that drew a crowd of 20,000 people in Madison Square Garden. They denounced President Franklin D. Roosevelt and Jewish conspiracies. The Nazis held a rally in New York City, where they were protected from protesters by the NYPD. This occurred a full six years after the concentration camps started in Germany. American history sometimes casually likes to omit those events in its recounting of World War II. Americans were undoubtedly the good guys of World War II, saving many countries and millions of people worldwide from fascism, but it has also done a poor job at ensuring these fascists ideas stay out of the country in recent years.

The Anti-Defamation League says it like it is: Anti-Semitism in the U.S. is as bad as it was in the 1930s If you, like any average citizen, know what happened in the 1930s, you would know that is absolutely terrifying news. The late 1930s saw the Nazi regime kill about six million Jewish people. It saw a country commit genocide against the Jewish people. It saw a country continue to commit mass murders all the way up to the point of defeat. This is the type of behavior the current administration is excusing by not taking a stand against the neo-nazi groups popping up all over the country.

This is not really surprising. History repeats itself. And people forget about history.

The Conference on Jewish Material Claims Against Germany conducted a survey that found that 41 percent of respondents did not know what Auschwitz was. A third also did not know that the true death tally for Jewish people during the war was — six million. How can we protect history and avoid making the same mistakes we made in the past when we forget what happened? In the same survey, 93 percent of respondents said that students should learn about the Holocaust in school. Americans understand the importance of passing down the knowledge of this dark past, but we have a government that still refuses to condemn groups promoting the same ideas that tore the world apart 80 years ago.

White nationalism and white supremacist groups have made a push in recent years in the United States. Even here on campus, “it’s okay to be white” stickers have been appearing. The violence and disgusting ideas that these groups promote have no place in a country that fought fascism the 1930s. But we forget, and history repeats itself.

Recently, a group of white nationalists in Washington D.C. interrupted a book reading by Jewish author Dr. Jonathan Metzl by chanting “this land is our land.” Even in non-violent demonstrations such as these, these groups refer to events that changed the landscape of the world and caused massive casualties. Those events took so many lives, led to a collective awakening to the plight of the Jewish people and now, 80 years later, we are falling back into old patterns.

There is no easy fix. The United States government could come out and condemn those groups, but I’m sure some people would be really upset about their first amendment rights. We should continue to teach people about the Holocaust and about many of the events of history that my generation and future generation might forget about. It is easy to think that those events are in the past, that society has changed and that it will never happen again. But history repeats itself, and what many don’t realize is that it is already happening again.