The Daily Northwestern • May 3, 2019 • https://dailynorthwestern.com/2019/05/03/campus/it-was-not-supposed-to-be-like-this-at-walk-to-remember-a-rumination-on-present-as-much-as-past/

‘It was not supposed to be like this’: At Walk to Remember, a rumination on present as much as past 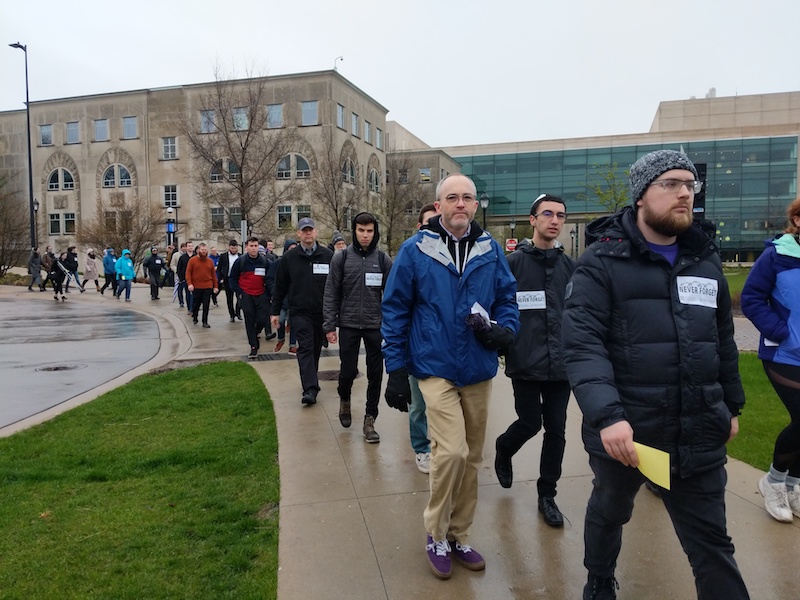 Students march down campus drive as part of Alpha Epsilon Pi’s Walk to Remember in memory of Holocaust victims.

It was wet, gusty and 45 degrees outside Thursday evening, but the weather did little to deter the procession that marched down Sheridan Road in silence.

Between 70 and 80 participants strode through campus as part of the Walk to Remember, an annual event co-sponsored by fraternity Alpha Epsilon Pi and B’nai B’rith International as part of Holocaust Remembrance Day, or Yom HaShoah. The silent walk symbolizes the forced march of Jews and other victims of the Nazi regime between concentration camps, event coordinator Avram Kordon said.

The event began at the Rock at 5:45 p.m., where students, community members and faculty gathered.

“I thought this was a very good event,” Kordon, a Weinberg freshman and AEPi’s cultural chair, said. “Everybody who was there seemed to have a reason to be there, and it meant something to them to come.”

The Walk took participants out onto Sheridan Road through the Arch before turning on Northwestern Place and looping back to The Rock via Campus Drive. Since the Walk is silent, participants were given “Never Forget” stickers to wear and yellow pamphlets to hand out to passersby.

Upon their return from the Rock, participants circled around speakers from Northwestern Hillel, Tannenbaum Chabad House, University Christian Ministry and the Holocaust Educational Foundation of Northwestern University, as well as several students who had visited the Auschwitz concentration camp.

The speeches addressed modern horrors as much as past ones, as speakers drew analogues between modern anti-Semitic violence like last week’s shooting at a Poway, California synagogue and the mass extermination of European Jews by Nazi Germany some 80 years prior.

“We decided to make it in conjunction with what happened in California over the weekend,” Kordon said. “The themes (of the Walk to Remember) are even more poignant today, given that tragedy.”

Hillel rabbi Brandon Bernstein expressed distress at the resurgence in anti-Semitic violence as the last of the Holocaust’s survivors are dying. The Anti-Defamation League recorded 1,879 anti-Semitic incidents in 2018, including the deadliest attack on Jews in the history of the United States with the Tree of Life synagogue shooting in Pittsburgh, Pennsylvania.

“It was not supposed to be like this,” Bernstein said, repeating a phrase from moments earlier in describing Nazi Germany’s rise. “We should not have to start viewing our sanctuaries as places of danger. We should not have to live in this world so full of hate and fear and xenophobia and homophobia and racism and anti-Semitism.”

Sarah Cushman, director of the Holocaust Educational Foundation, emphasized the importance of historical study in paying tribute to the Holocaust’s victims.

“Critical and knowledgeable engagement in historical inquiry are both ways to remember the Holocaust,” Cushman said.

The foundation became a part of Weinberg College of Arts and Sciences in 2016, having been independently founded by a Holocaust survivor in 1976.

Rabbi Dov Hillel Klein focused much of his attention on the Poway shooting, describing the shooting from the perspective of the Poway synagogue’s rabbi Yisroel Goldstein, who Klein said he attended rabbinical school with in 1980. Goldstein lost two fingers in the shooting, but survived when the shooting’s sole victim, Lori Kaye, leapt between the shooter and Goldstein.

Seven candles were placed on the low wall encircling the Rock; they were initially meant to be lit after the crowd returned from the march around campus, but event leaders elected to delay the lighting until the end of the event due to wind. Six of the candles represented the 6 million Jewish victims of the Holocaust.

The seventh was for Lori Kaye.

Related stories:
– IfNotNow movement calls on college Hillel chapters to end ties to Birthright Israel
– In God we trust? : Jewish students’ relationship to Israel, like the country itself, are complicated