The Daily Northwestern • May 1, 2019 • https://dailynorthwestern.com/2019/05/01/sports/womens-tennis-hand-receives-at-large-bid-to-ncaa-singles-championships/ 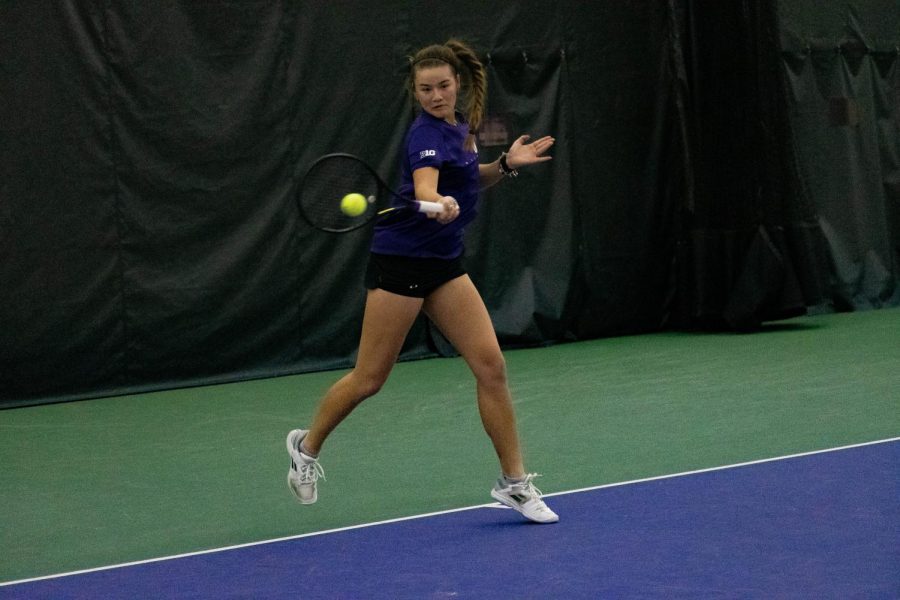 Clarissa Hand hits the ball. The freshman was one of just 10 rookies to earn a bid to this year’s NCAA Singles Championships.

Northwestern freshman Clarissa Hand earned an at-large bid to this year’s NCAA Singles Championships, which will be held from May 20 to May 25 at the USTA National Campus in Orlando, Fla.

The New Jersey native is currently ranked No. 39 among all singles players in the country and has played all but one of her 25 dual matches for the Wildcats at No. 1 singles. Hand has collected 12 wins in dual-match singles play this season — the most of any rookie in the Big Ten — and has six victories against ranked opponents.

Hand’s biggest win this season came in January, in an upset of Miami’s Estela Perez-Somarriba in two sets at the Miami Spring Invite. Hand remains one of only four players to beat Perez-Somarriba, who is now the top-ranked player in the country and the tournament’s No. 1 overall seed, in a singles match this season.

After losing three straight matches during NU’s shaky mid-April stretch, Hand has rebounded to win four of her last six matches. She’ll look to improve that record when the Cats (15-10, 7-4 Big Ten) face Princeton in the first round of the NCAA Tournament on Friday in Seattle.

This is the fifth time in seven years that the Cats will send a representative to the NCAA Singles Championships, and the first time since 2007 that an NU freshman will play. Last year, then-senior Erin Larner advanced to the second round of the tournament.

Hand is one of six Big Ten players and just 10 freshmen selected for this year’s tournament. As a junior, she played at the USTA National Campus in December 2017, winning five matches and advancing to the quarterfinals of the Girls’ 18 USTA Winter National Championships.

Correction: A previous version of this story included a photo that did not feature Clarissa Hand. It depicted Julie Byrne. It has since been updated. The Daily regrets the error.