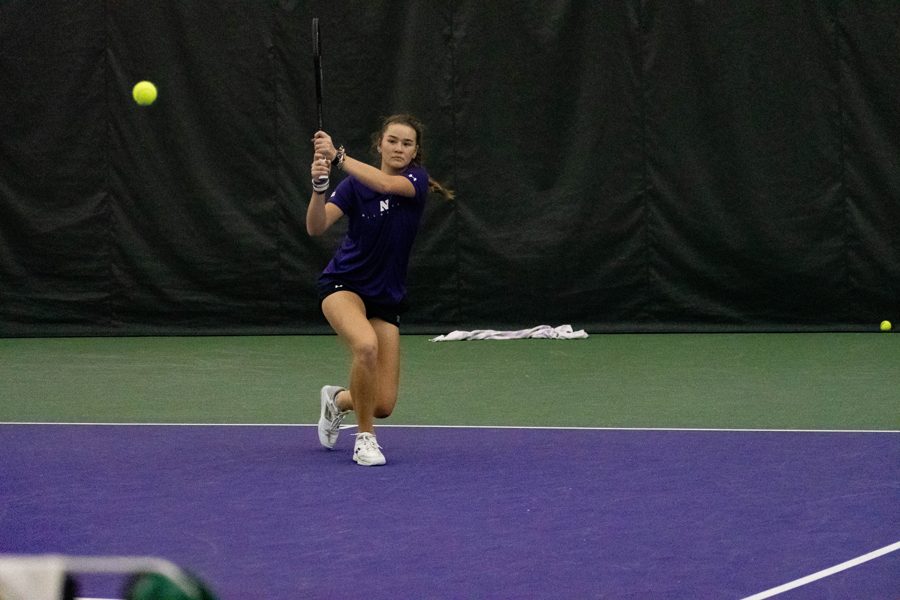 Clarissa Hand hits a shot. The freshman picked up her sixth ranked win in this weekend’s Big Ten Tournament.

For the fourth year in a row, Northwestern’s Big Ten Tournament hopes were crushed by an elite Michigan team.

After a second-round 4-0 win over fourth-seeded Ohio State to open their postseason conference play, the fifth-seeded Wildcats fell in a 4-1 semifinal loss to the Wolverines on Saturday.

While disappointed with the end result, coach Claire Pollard said she was pleased with the rejuvenated effort she saw from her team, especially after a late-season losing stretch slid NU from a battle for first place into fifth.

“Every player, every coach, we really dug in and asked ourselves, ‘Why is this happening, and what do we need to do to make sure it doesn’t happen?’” Pollard said. “I felt like everyone really owned up to the things that were hurting them and did a good job. The girls worked really hard to turn it around.”

The Cats (15-10, 7-4 Big Ten) kicked off their first match in Lincoln, Nebraska against the Buckeyes (19-6, 8-3) with two doubles wins to claim the first team point. Freshman Clarissa Hand picked up her sixth ranked win of the season in a 6-2, 6-3 takedown of No. 55 Isabelle Boulais — just a week earlier, Boulais had beaten Hand in three sets.

Junior Julie Byrne topped another ranked opponent at No. 2 singles, and it was sophomore Caroline Pozo at No. 5 singles who clinched the Cats’ ticket into the semifinals with a two-set win.

A day later, NU matched up against top-seeded Michigan (18-5, 11-0). The Cats kept it closer than during their previous meeting with the Wolverines this season — a 6-1 loss to Michigan on April 6 that started that four-match losing streak — but still fell, the only wins coming at No. 6 singles from Hannah McColgan and No. 2 doubles from the pair of McColgan and Byrne.

“We were back more like ourselves, and consistently over both days we had good, solid performances, whereas over the last month we’ve been a little bit up and down,” she said. “It was good to see us play back-to-back good matches.”

For the record 24th year in a row, NU will have the chance to stretch its season beyond the Big Ten Tournament. On Monday, the Cats earned a bid to this year’s NCAA Tournament and will face Princeton (18-4, 7-0 Ivy League) in the opening round Friday.

The winner of that match will face off against the winner of the matchup between Washington — the No. 10 overall seed in the tournament and host of the first two rounds of matches — and Army.

The Tigers participated at the Wildcat Invite in October, which was NU’s opening event of the season. The three-day competition did not feature any team matchups, and there were only two matches between the two teams over that weekend.

The doubles team of freshman Vanessa Streng and Pozo fell 6-3 to Princeton’s Clare McKee and Nathalie Rodilosso. Pozo also faced off against Nicole Kalhorn — the current No. 5 singles player for the Tigers — and won, 6-4, 7-6.

“The girls are really excited,” Pollard said. “It’s elimination time, so you’ve got to play your best.”