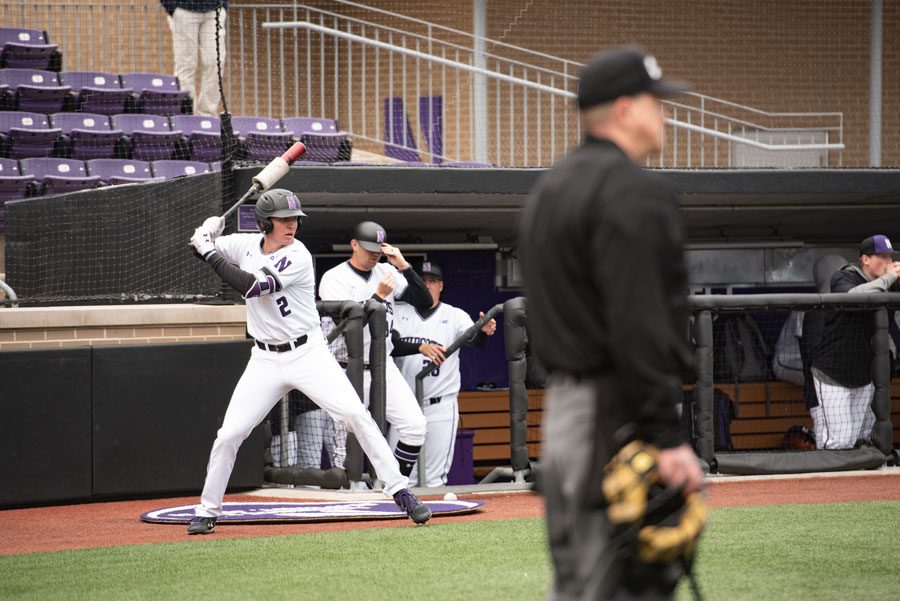 Despite it being half-past noon on a gameday Sunday, the turf of Miller Park was empty. The bitter temperature was below the mandatory minimum of 28 degrees needed to start the contest, and the game between San Jose State and Northwestern was delayed indefinitely until the baseline was reached.

In the meantime, the Spartans had vacated the first-base dugout and taken solace on their bus right outside the stadium. The Wildcats had retreated as well, into their locker room behind the third-base dugout that now had only one or two people in it.

There was only one player on the field — senior shortstop Jack Dunn, swinging his DeMarini bat right outside the dugout.

“I just wanted to come out here early, get some swings in, get loose, stay loose, because I didn’t know what time we were to start,” Dunn said. “And then I just like being out here.”

As time passed by, the temperature slowly rose and first pitch got closer, some of his teammates joined Dunn on the field. Soon, a group were all swinging their bats, imitating batting stances and having a good time. When the game finally started after an approximately 90-minute delay, NU jumped out to an early lead and never looked back on its way to a 6-0 win.

Whether due to cold temperature, thunderstorms or something else entirely, delays and rescheduled games happen more than a few times during a season for the Cats, usually occurring during weekend series. Midweek games — like Tuesday’s scheduled matchup with Illinois State — that have poor weather in the forecast will be cancelled before the visiting team leaves for the contest.

Sometimes, if bad weather is in the forecast on weekends, teams will push games back or move games forward, creating doubleheaders to prevent hours-long delays. However, that does not always happen, and sometimes the team is stuck playing the waiting game. When that occurs, everyone has their own methods for staying loose while also being ready to snap right back into game mode.

Sophomore pitcher Quinn Lavelle said he finds himself talking throughout rain delays, especially in a dugout that does not have much sitting room.

Coach Spencer Allen said during delays, players look to maintain a “soft focus” instead of a “hard focus.” It can be difficult, Allen said, to be locked in for an unknown amount of time before even stepping on the field.

While Dunn was taking dry cuts on the vacant field on that Sunday in March, the rest of the team was in the locker room talking with each other, said senior first baseman Willie Bourbon. Most of the conversation revolved around baseball, Bourbon added, but not all of it.

“Some of the funniest stories, some of the best times are in those delays,” Allen said. “Whether you’re on a bus or in the dugout or in a hidden facility somewhere, those are great, great opportunities for us for sure.”

During the second weekend of the season, the Cats were in a rain delay in Durham, North Carolina. Dunn said the team spent the delay in the dugout cracking jokes and telling stories. He cited junior Alex Erro as “probably the best storyteller,” as well as a great impersonator, highlighting his impression of freshman Anthony Calarco.

Dunn said those laughs help keep everyone loose. As for his favorite stories from a rain delay, the senior opted to keep them within the team.

“I’ll leave it to your imagination.”