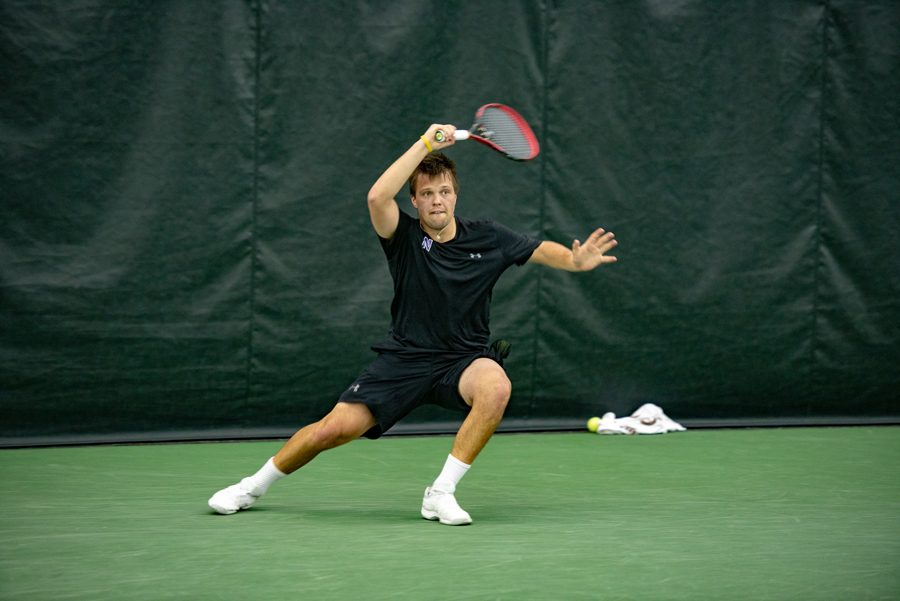 Dominik Stary prepares to hit the ball. The junior fell at No. 1 singles in NU’s Big Ten Tournament match against Purdue this weekend.

With one exception, the higher seed won every match at this year’s Big Ten Tournament, with top-seed Ohio State beating No. 2 seed Illinois in the final.

Unfortunately for Northwestern, that exception came at the Wildcats’ expense, as No. 7 seed NU (14-14, 5-6 Big Ten) fell 4-3 in a tightly-contested match to 10th-seeded Purdue (10-14, 3-8) in the tournament’s opening round Thursday in Ann Arbor, Michigan.

“It was a really hard-fought match,” coach Arvid Swan said. “We put ourselves in a position to win, so I was really proud of the effort. We lost the doubles point, and the competitive spirit was really good, and unfortunately we didn’t get it.”

Tied 3-3, the match came down to No. 6 singles, when freshman Trice Pickens went to a decisive third set against the Boilermakers’ Franz Luna. After dropping the first set, Pickens came back to win the second, but could not hold on after taking a 4-1 lead in the third. Luna came from behind to win the set 7-5, and the match two sets to one.

Luna’s win completed Purdue’s comeback from down 3-1 in the team score. The Boilermakers took the doubles point despite a win from the Cats’ team of freshman Simen Bratholm and senior Ben Vandixhorn at No. 3 doubles, but NU won the first three completed singles matches.

At No. 3 singles, junior Chris Ephron dominated Purdue’s Maksymilian Raupuk, winning 6-2, 6-0. Senior Jason Seidman’s match, at No. 5 singles, was next to finish, and he too made quick work of his opponent, beating Dominik Sochurek 6-2, 6-2.

Sophomore Antonioni Fasano put the Cats in position to win the match, winning a pair of tight sets at No. 2 singles in a 6-4, 6-4 triumph over the Boilermakers’ Mateo Julio. But NU was unable to close it out.

Bratholm, at No. 4 singles, took Stephan Koenigsfest to a tiebreak in the first set but came up short, then was blown out 6-2 in the second set as Purdue pulled closer. Junior Dominik Stary, after losing a close first set, looked dead at No. 1 singles after trailing 5-1 in the second. But he battled back to pull within 5-4 before he too ultimately fell, putting the match on Pickens’ shoulders.

“I give a lot of credit to (Luna). He played good tennis in the third set,” Swan said. “Trice did an excellent job after losing the first set to come back and take it to a third, so he gave us a chance to win that match. It didn’t go his way, but it wasn’t anything that he did wrong. It was (Luna) that came up with some shots.”

The loss ended NU’s season, but the Cats should be in a position to move up in the standings next year. They have just three seniors on the 11-player roster, and just one starter in the singles lineup is graduating.

Once a perennial Big Ten power, NU has faltered the last two years, going a combined 23-31 after compiling a 90-37 mark for the previous four seasons. But Swan said the Cats’ returning talent puts the program in a good place moving forward.

“It’s a great group coming back,” Swan said. “We’ve learned a lot over the years in terms of growth and improvement. We’re excited for next year to start.”