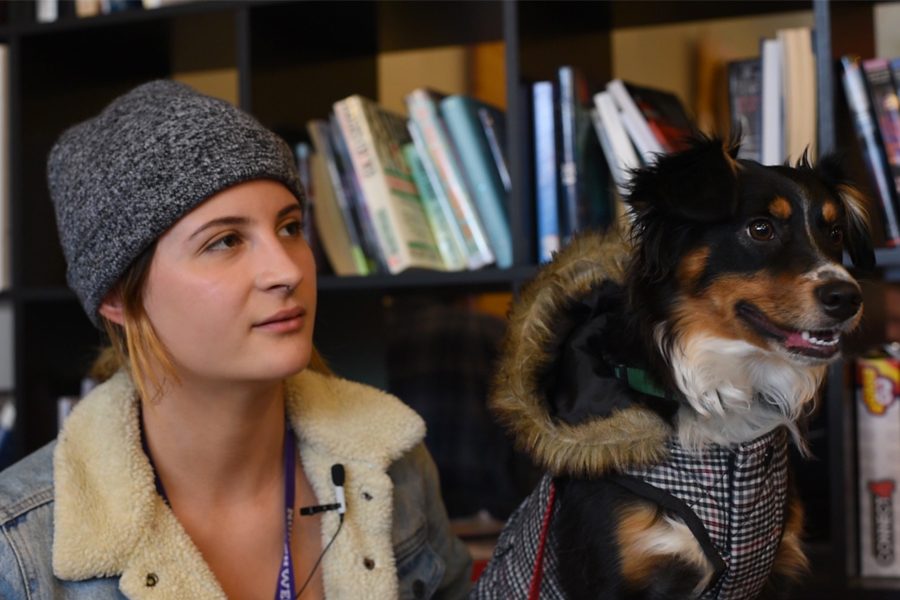 Weinberg sophomore Debra Duval and her emotional support dog Xayah. Duval moved off campus after students complained about her dog.

Weinberg sophomore Debra Duval said she decided to live off campus after the third or fourth complaint she got from students living in Elder HalI.

The complaints were about her emotional support dog, Xayah, who they said was being too loud. Every time Elder officials informed her of a complaint, she said, they laughed it off because they were given by “people (who) don’t know what a dog is,” she said.

“They’re out in the lobby, drunk at 4 a.m., and they can be as loud as they want and I have an emotional support dog who barks twice in the middle of the day and I get chastised for it and they don’t,” Duval said.

However, this was just one of a string of problems Duval dealt with after she got an emotional support animal.

Increasingly, students are running into issues with the different policies Residential Services has in place regarding their emotional support animals — enough for them to move off campus, like Duval did.

An emotional support animal is a housing accommodation per Residential Services’ policy. To be authorized to have one, a student must submit a request with a medical provider’s approval to the housing accommodation review committee, said Mark D’Arienzo, the senior associate director of operations and services.

Duval turned in the necessary forms a month before she moved in. However, they were only approved on move-in day, which she said stressed her out, because she had nowhere else to live if she wasn’t allowed into Elder Hall with Xayah.

SESP sophomore Kimberly Sloan, who has an emotional support rabbit named Peach, also said her paperwork was processed slowly. Sloan was worried about Peach’s well-being because of Residential Services’ crating policy, which mandates that the animals are kept caged while the student is not in the dorm.

Duval said this was one of the reasons she decided to move off campus, and to make up for having kept Xayah in such a small dorm, she tried to find the “biggest” apartment she could afford.

Sloan said this policy and Residential Services’ attitude toward her when she was applying to get Peach made it seem like it didn’t want her to get an emotional support animal.

“I sat down with someone in Res Services and they were like, ‘OK we have your paperwork, we can’t tell you no or else it’s discrimination, like, guess you get an animal,’” Sloan said. “I didn’t feel very believed, as far as someone who has mental illness… They were like ‘Well, whatever, your therapist is a real licensed therapist, so there’s nothing we can do.’”

D’Arienzo responded that Residential Services’ priority is to accommodate the needs of students with mental illnesses.

“Since the inception of the emotional support animal being allowed in the dorms, we’ve always taken (mental health) very seriously,” D’Arienzo said. “We see the need for that, and we’re just asking the steps be followed.”

Yet Duval said she wasn’t able to find the support she needed, and felt like Residential Services was “persuading” her to move out following the student complaints about Xayah. She said they sent her repeated emails about leaving campus housing. She added that she wished Residential Services had provided her with support when she was moving into an apartment, but that instead, she had to research everything on her own.

Duval moved off campus at the end of Fall Quarter. She said she has no regrets about leaving campus housing.

“It’s a much better community,” she said. “I kind of just wished I lived off campus immediately.”