Buchaniec: The iron wall needs to be one of anonymity 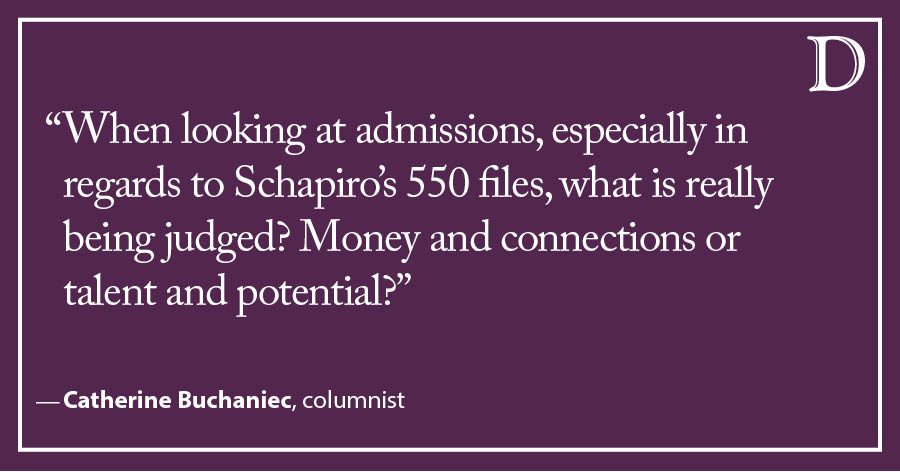 Shrouded in secrecy, highly selective universities rarely give insight into their admissions practices. Within the past year or so, however, the curtain has slowly risen to reveal an apparatus plagued with murky issues. From the Harvard affirmative action Supreme Court case regarding Asian applicants to Operation Varsity Blues, the illusion of fair admissions continues to crumble — Northwestern included.

In an article published Wednesday, The Daily reported that a select pool of about 550 applicants had their files read and their admissions decisions made by University President Morton Schapiro. This group of students includes legacies, children whose family members have donated to NU, and others connected to Schapiro who ask him to read their student’s application.

Unlike college admissions officers, Schapiro regularly interacts with donors and alumni while simultaneously having the ability to admit their children and grandchildren. With this discovery, the notion of an iron wall between the realm of wealth and admissions essentially collapses — so much for not buying your way in.

I understand the most obvious advantage of admitting legacy students: The likelihood of an alum donating thousands of dollars — possibly even a few million — most likely increases if their child currently attends the institution in question. However, by doing so, NU continues to take part in a process biased against middle-class and low-income families.

When evaluating prospective students, universities often look for a return on investment. They may want to admit the next Supreme Court justice, the next Fortune 500 CEO, perhaps even the next member of the royal family. They want students that are going to impact the world — names that are going to go in history books and add to the school’s endowment and fame.

By attending Northwestern, students make an unspoken contract — they get to use Northwestern’s name and resources to achieve success; the University then gets to advertise that success to attract future students. The donations received during the process are an added but vital bonus.

For a typical prospective student coming from a legacy background or a famous family, the return on investment value appears especially high. This wealthy student already has industry connections, familial wealth and countless other societal advantages compared to a student hailing from, say, a low-income background. They are already steps into a game other students are only just beginning to learn.

In light of recent conversations about admissions decisions, universities have continued to defend their practices. At some institutions, including NU, this defense has manifested itself in a supposed separation between the alumni relations office and that of admissions.

Yet, if that was the case, how did the files of legacy, wealthy and famous students move from Northwestern’s admissions offie to Schapiro’s desk? The admissions office has previously said that they don’t have access to information about whether one’s parents donated money, but then how would they know those files fell under Schapiro’s unique purview?

Northwestern claims to employ a need-blind admissions policy, meaning the amount of financial aid a prospective student would need in order to attend does not factor into their admissions decision. However, the admissions office has access to legacy information. Admissions officers have the ability to Google whose parents are famous and, in the case of Schapiro, can see the donor list. When looking at admissions, especially in regards to Schapiro’s 550 files, what is really being judged? Money and connections or talent and potential?

In order to do this, I believe Northwestern ought to introduce a sense of anonymity into college admissions. Not only should someone’s legacy status be kept secret, but the names of applicants should also remain anonymous. Even if admissions officers don’t have access to the donor list like Schapiro does, they do have the ability to Google names — to see if someone’s mother won an Oscar or if their father was recently elected.

The ideal iron wall between admissions and wealth wouldn’t just be one between offices. It would provide a sense that students are being judged on their own accomplishments, not their families; their abilities, not their income level.