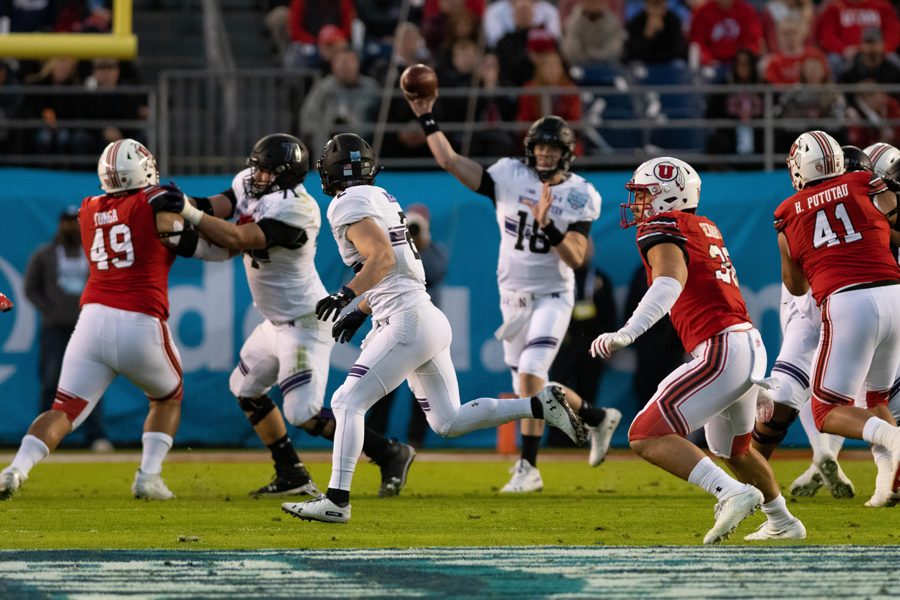 Clayton Thorson throws a pass. The senior quarterback is projected as a fourth- or fifth-round pick in this week’s NFL Draft.

After four record-setting years leading the Northwestern offense, quarterback Clayton Thorson will now look to continue his football career in the NFL.

Thorson, the Wildcats’ all-time leader in completions, passing yards and touchdowns, has drawn a lot of interest from NFL scouts as all 32 teams attended NU’s Pro Day. However, there is a lot of discussion about exactly what round Thorson will land in. Most projections have the Wheaton, Ill. native going to a team between the fourth and fifth rounds.

Thorson has been linked to many teams and recently visited the New England Patriots and the Carolina Panthers. Notably, the Panthers sent offensive coordinator Norv Turner to the Cats’ Pro Day.

“He’s a war daddy, someone is going to get a steal,” coach Pat Fitzgerald said of Thorson. “His best football is ahead of him and, to me, that’s really encouraging for him and for his family. I’m really fired up for him.”

If Thorson gets drafted, it would be the fifth-straight year that a player from NU has been picked, the longest stretch for the program since a seven-year span from 1997-2003. But Thorson might not be the only Wildcat drafted this weekend.

Thorson was one of three NU players who participated in the NFL Combine, along with senior cornerback Montre Hartage and senior linebacker Nate Hall. Hartage is projected by many mock drafts as a day-three pick.

“Really frustrated for Montre and Nate coming off of injuries,” Fitzgerald said. “It’s disappointing but they’ll be fine. They both have the ability, they both have the temperament and the skillset to play on Sunday.”

Many people in the program do not have an idea of exactly where the Cats’ prospects will end up. Offensive coordinator Mick McCall said it’s a business and he doesn’t know what teams are thinking.

“We don’t get to see all the guys across the country like the NFL scouts and teams,” defensive coordinator Mike Hankwitz said. “We have no idea where our guys rank in comparison to anybody else out there. We’re curious like everyone else where they’re going to go.”

However, the potential opportunities do not end once the Draft concludes. Green Bay Packers’ defensive lineman Tyler Lancaster took advantage of the post-draft free agency pool last year and eventually found his way on the roster.

Seniors Blake Hance, Flynn Nagel, Jared McGee, Jordan Thompson and Tommy Doles all project as candidates to sign in free agency with NFL teams. Regardless, the coaching staff’s primary sentiment was that they just wanted to see their seniors get a shot to make a team.