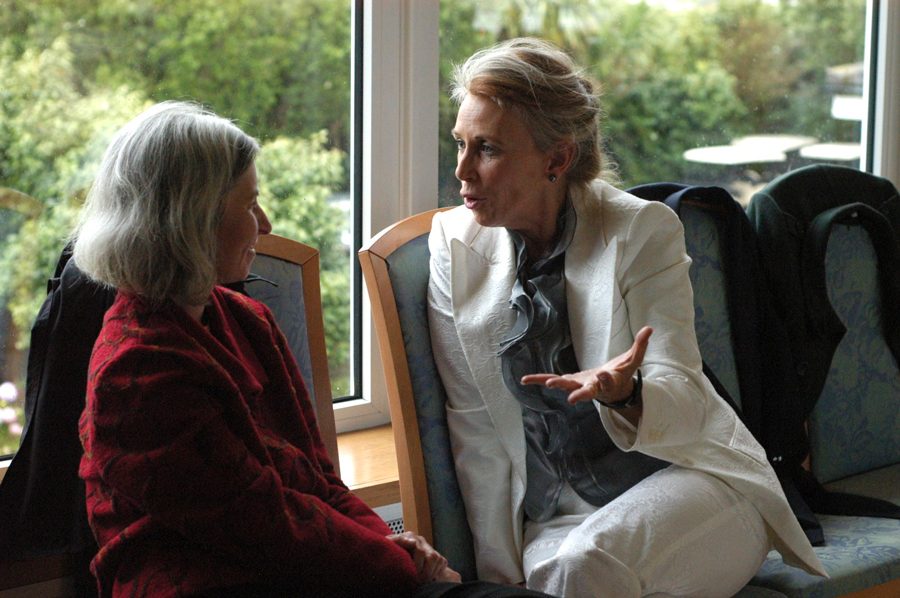 The event was also made possible by the Edith Kreeger Wolf Endowment, a fund that brings scholars, advocates and other professional figures to Northwestern’s campus in an attempt to further students’ appreciation and knowledge of women in different fields.

In addition to being an author and a radical feminist legal scholar at Harvard University and the University of Michigan, she has served as the first special gender advisor to the prosecutor of the International Criminal Court from 2008 to 2012, where she implemented her concept of “gender crime.”

“She’s so fundamentally important to the scholarship we work in, particularly feminist theory and sexuality studies,” Dietz said.

MacKinnon said the inspiration for her latest title comes from a concept known as the Butterfly Effect –– a theory developed by Edward Lorenz that suggests small changes in one place can produce immense change in an entirely different location. She said she translated this theory into the world of legal scholarship and gender studies, arguing that relevant and small interventions can produce systematic changes in our world.

A group of butterflies is called a kaleidoscope, an image MacKinnon said represents a metaphor for the survivors of sexual violence. She added “survivors cut across identities,” noting they can hold any social identity, including race, gender, sexuality and more.

In addition to discussing her book, MacKinnon also touched on topics ranging from the possibilities of an Equal Rights Amendment to international sex crime laws. She said the current national political climate has created a culture where the more power a man has, “the more sex he can exact from his inferiors.” However, she said activism such as the #MeToo movement have helped to change this.

She drew on the powerful reaction to Justice Brett Kavanaugh’s confirmation hearings and his example of the “tantrums of entitlement” prevalent in modern society, saying, “we are the backlash this time.”

“Inequality is not consented to,” MacKinnon said. “Sexual violence doesn’t just happen to you once. Victims are serial too.”

Toward the end of the Q&A, MacKinnon discussed the unequal treatment of sexual abuse survivors in the legal system. She said language perpetuates furthers power imbalances.

She said survivors can “claim” attacks or “allege” an event took place, but they hardly ever “report” such things, while perpetrators are merely required to “deny.” There is no equivalent word to express the insecure state of survivors who report what happened to them.

“Apparently we lose our credibility with our virginity,” MacKinnon said. “Think on it.”

Following Mackinnon’s talk, Weinberg sophomore Shiqi Xiao, who lived in China, said she connected to the discussion in a very personal way; the country’s own #MeToo movement is heavily watched by the government.

After informing MacKinnon of the current state of Me Too in China during the Q&A, Xiao said MacKinnon not only discussed the topic in depth with her, but provided her advice on how to further investigate and take action.

“It’s because of this event that I finally have a source of information on the movement,” Xiao said. “It’s really cool, because I didn’t have that opportunity when I was in China.”

Correction: An earlier version of the article and caption mischaracterized Catharine MacKinnon’s book, calling it a novel. The Daily regrets the error.