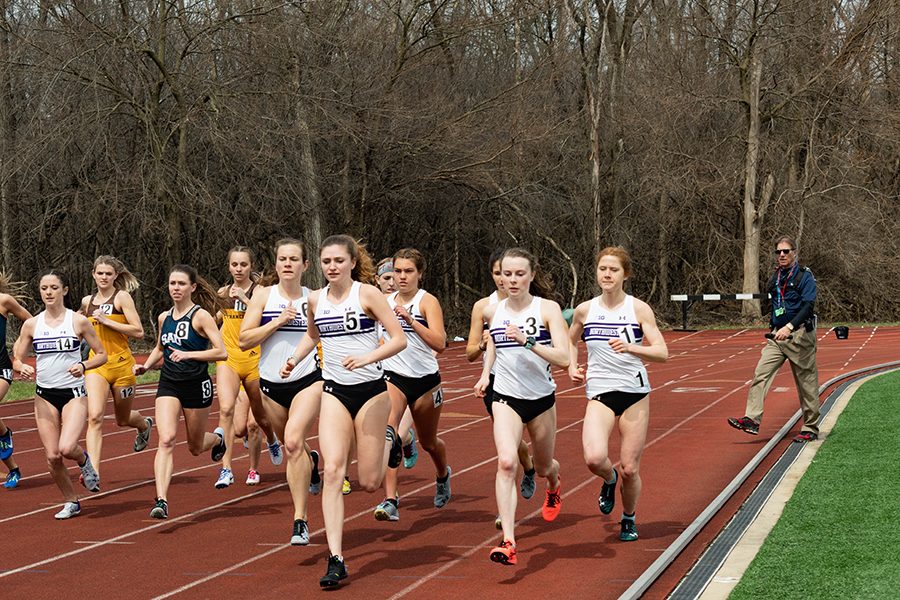 Sarah Nicholson leads a pack of runners. The junior ran a season-best time in the 10,000-meter race at the Mt. Sac Relays on Thursday.

Eight Northwestern runners posted season-best times after a strong weekend on the West Coast, a positive sign as many hope to qualify for NCAA Regionals at the end of next month.

The Wildcats split up between three California meets this weekend, and across the board, coach ‘A Havahla Haynes said she was pleased with the team’s performances. Juniors Aubrey Roberts, Kelly O’Brien and Sarah Nicholson were among those who ran season-bests — as they look ahead to qualifying for NCAA Regionals at the end of next month, Haynes said the weekend was a step in the right direction for each of them.

“(They) have to run a little bit faster perhaps, so we’re going to keep working toward that,” Haynes said. “But they all had great races, which was really exciting.”

Though it was only her second time, Nicholson competed in the 10,000-meter race at the Mt. Sac Relays on Thursday. In her first time running the distance last month, she struggled, posting a 35:31 time and tapering off toward the end of the race.

“She changed her mindset going into it,” Haynes said. “She really relaxed early on, planning to go a second faster per lap to get the time down — and she executed it perfectly.”

Nicholson said this go around she “definitely felt better” than her first 10K at the Mike Fanelli Track Classic.

Executing a better race strategy early on left her with more energy over the last two miles, Nicholson said, and feeling more in control showed up in her results.

“Mentally, I went in trying to attack it as a four mile tempo and a two mile race… over the first four miles, really just focusing on airplane music during the race and staying with the people around me,” Nicholson said. “And then over the last two miles, mentally making a commitment to be uncomfortable.”

O’Brien and Roberts also ran season-bests half an hour away at the Bryan Clay Invitational, posting 4:25.59 and 4:35.00 times, respectively. Both qualified for NCAA Regionals last year, and Haynes said they’re both trending in the right direction to make a repeat showing.

Along with the three juniors, freshmen Rachel McCardell, Sara McCoy and Hannah Hall each ran season-best times too.

In the 1,500-meter race, McCardell and McCoy crossed the line in 4:34 and 4:56 respectively at the Bryan Clay and Long Beach State Invitationals, while Hall ran an 18:11 5K at Bryan Clay.

With strong performances throughout the spring from freshmen like McCardell, Hall and Sielle Kearney, Haynes said she’s excited as the runners come close to qualifying for USATF Junior Outdoor Championships at the end of June.

Nicholson said as the season winds down, she’s excited to see the team’s younger runners continue to step up.

“We’ve got really good momentum going now,” Nicholson said. “So I think the next few races will be really, really exciting.”