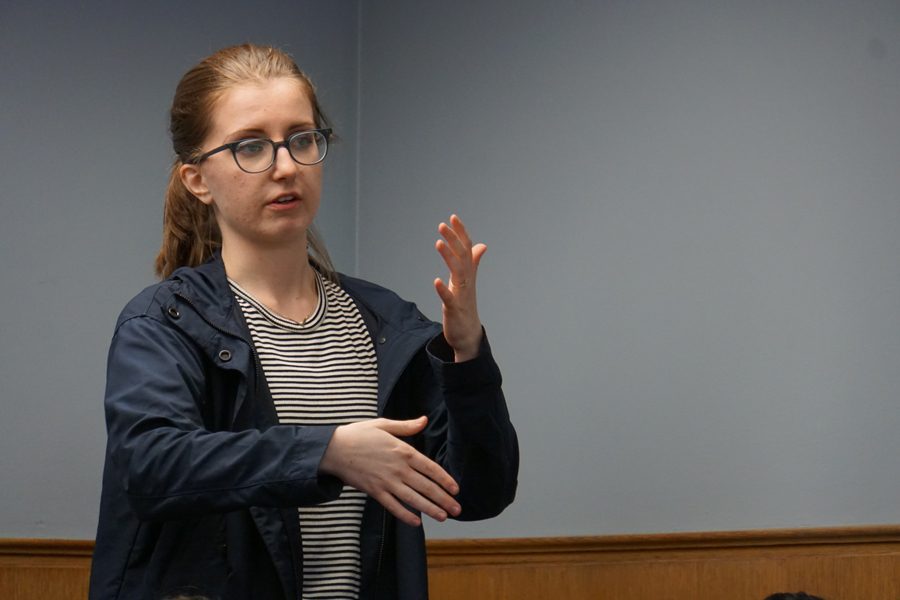 ASG president Emily Ash presents legislation during ASG senate. The legislation is a result of conversations with administrators and members of ASG.

Associated Student Government passed legislation Wednesday to establish a Committee on Undergraduate Fundraising Priorities. The committee will be tasked with engaging the undergraduate student body on campus improvements that could be implemented through “major gifts or endowment” and submitting an annual list of fundraising priorities to University leadership.

Those priorities will focus on increasing funding for student-facing programs, said ASG president Emily Ash, the author of the resolution. Ash said possible programs include Counseling and Psychological Services, Books for Cats and services to increase academic technology in the classroom.

Projects and programs that will receive money from alumni fundraising are currently decided solely by select members of the University administration, who communicate those preferences to the Office of Alumni Relations and Development. That office subsequently acts like a “sales force,” Ash said, connecting interested potential donors to fundraising opportunities.

“If you want money from Northwestern, getting it directly from fundraising is kind of the way to do it for long-term endowment,” said Matthew Wylie, the speaker of the Senate.

The legislation comes partially as a response to the way in which the University uses alumni donations, often funding expensive construction projects and programming, though Ash stressed that increasing student voices was the primary motivator.

Such projects include new athletic facilities, on which the University recently spent $380 million — $270 million to build the Walter Athletics Center and Ryan Fieldhouse, and $110 million to renovate Welsh-Ryan Arena.

That spending, the resolution explains, is dissonant with the experiences of many students on campus who struggle with obstacles like food security, academic equity and financial accessibility.

“Despite the fact that things like athletics in reality take up a relatively small portion of ARD’s activities,” Ash said, “the fact remains that there’s a really strong perception of certain projects and programs taking priority over those that impact day-to-day student life, really, really critical services that are serving some of our most marginalized populations.”

The committee will be composed of both student government officials and NU community members, which Ash said will elevate student voices more directly than if only ASG members were included. Ash referred to positive results from appointing people outside of ASG to seats on the Advisory Committee on Investment Responsibility as demonstrative of the necessity of external input.

Both Patricia Telles-Irvin, the vice president for student affairs, and Provost Jonathan Holloway have have responded the legislation “very warmly,” Ash said.

“This is a really cool idea that gives us a greater amount of influence in something that is extremely important to the university,” said Weinberg senator Margot Bartol. “(It) allows us a voice in a lot of money.”