Immersive play, an active eavesdropping experience, to open in Chicago 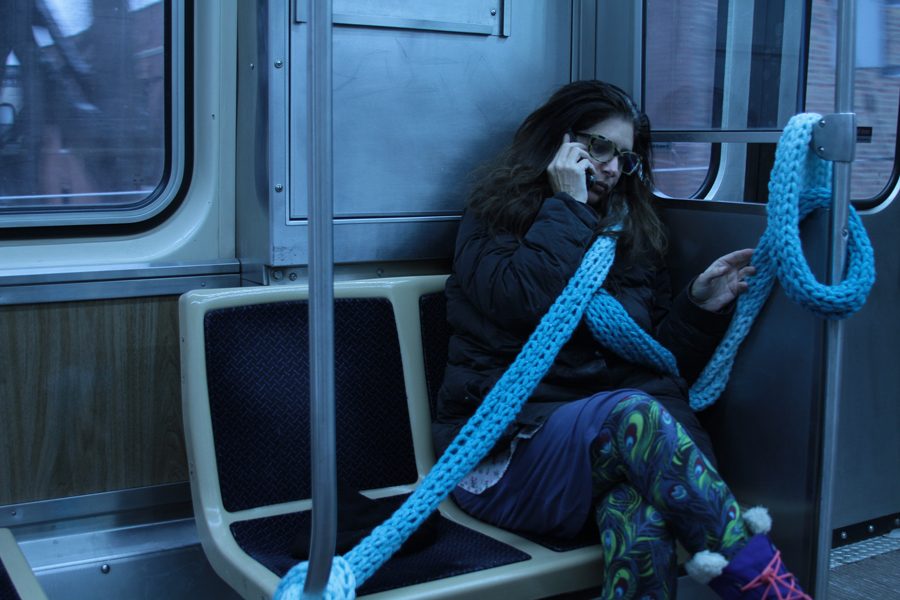 Barrie Cole poses in an L car, the setting for her unconventional play “Reverse Gossip.”

Every Chicago resident has their favorite L horror story to share in a booth at Clarke’s. But when playwright Barrie Cole frequented the train waiting for inspiration to strike, she found little to be desired.

“I ride the L a lot, and because I’m a writer I am interested in what people are saying,” Cole said. “Every time I overheard a cell phone conversation, I was so disappointed. They would be like, ‘Yeah, I’m going to buy some socks from Target and then I’m going to get groceries.’ So, I thought, ‘What would I like to hear?’”

This question served at the inspiration for her unconventional play “Reverse Gossip.”

“Reverse Gossip” opens Friday, April 26 and runs through May 11 at and by Walnut Spaceship Studio, which is operating out of Bridgeport Arts Center. The show does not follow the cut-and-dry format of a typical play — it features 24 one-sided phone conversations in the forms of monologues and duets, creating an immersive experience for the audience to eavesdrop on the call, just as you would on public transportation. The topics of these calls range from falling in love to trying to write a haiku to discussing the weakening effect of coffee.

While Cole adapted it for the stage, she said the piece started out as a public art performance. After being told the time and place, actors would take their places on the appropriate L car and start their monologues, catching the attention of the riders.

Dr. Ira Murfin (Communication Doctorate ‘17) once participated in one of these performances. Murfin said he and the performers tipped their hats by boarding the car as a group, but even so, some riders who were not paying attention didn’t necessarily understand what was happening until the monologue mentioned something “weird or surprising.” Despite the initial confusion, he said the viewers seemed generally amused.

Murfin now plays a different part for the stage adaptation: the pre-recorded train announcer. He said this role serves a greater purpose than just announcing the train is no longer in service — the unseen character narrates emotional states and even breaks into a monologue over the loudspeaker.

“I thought about the announcements here on the CTA and tried to mimic that tone, and then from there, experimented with ways to soften the voice or make the voice sound confused or sad, but still be recognizable as the voice,” Murfin said. “There’s always something funny about when those disembodied voices that seem totally impersonal… they’ve got their own story.”

The familiar voice is not the only element of the L in this performance. Dr. Paul Leisen (Communication ’90), a producer for the show, worked on the set design and made the space feel like an actual L car. He said he worked with “linear forms” in tandem with a mix of chairs and benches to convey the “transit feeling” to the audience.

Leisen said he credits his vision as a set designer to his time at Northwestern, specifically the moments he spent in the Hal and Martha Hyer Wallis and Mussetter-Struble Theaters.

“What I do in the world, it comes a lot through that early lens of having studied in those two specific black box theaters,” Leisen said. “I carry those experiences all the time. A week doesn’t go by that I don’t sort of put myself back in those rooms.”