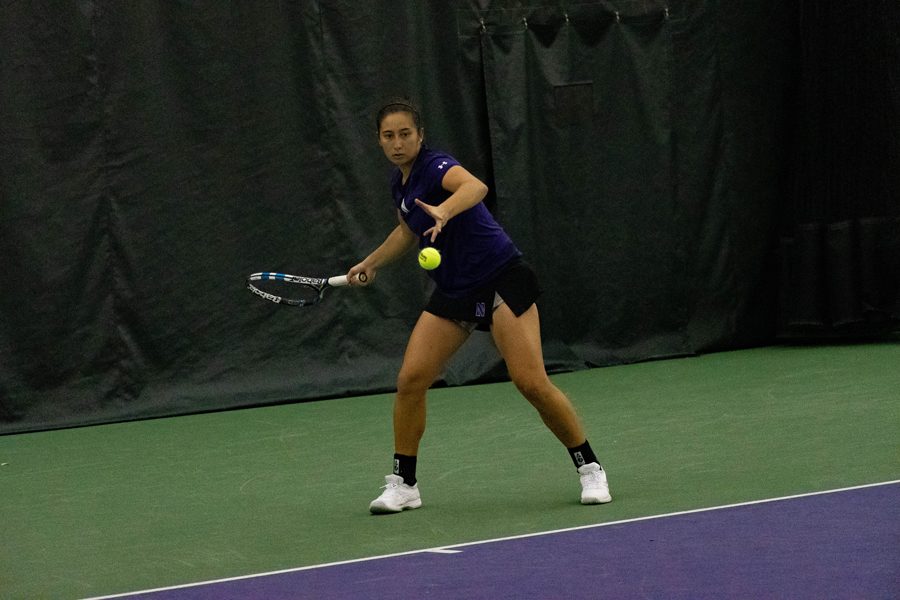 Lee Or hits the ball. The senior won all four matches she played in NU’s final regular season weekend.

Northwestern closed its regular season last weekend with a pair of Big Ten wins over No. 18 Ohio State and Penn State.

The No. 31 Wildcats (14-9, 7-4 Big Ten) upset the Buckeyes 5-2 on Saturday for their first win in conference play since March 29 and finished off the weekend with a 4-2 Senior Day victory over the Nittany Lions on Sunday.

Senior Lee Or continued her strong Big Ten season with four wins total in singles and doubles across the two days. Or finished the year with an 8-2 record in conference play and a 13-10 overall record.

Starting the weekend against Ohio State (19-5, 8-3) — who entered the match with an 8-1 record in the Big Ten — the Cats took the double point with wins from their No. 1 and No. 2 spots. Or and freshman Clarissa Hand won 6-3 in the top slot.

Junior Julie Byrne and freshman Hannah McColgan defeated the No. 74-ranked pair of Isabelle Boulais and Danielle Wolf at second doubles to clinch the point for NU, and it gave the Cats good momentum heading into the rest of the afternoon.

Hand continued her shaky stretch of singles play, dropping her match at first singles in three sets to the 63rd-ranked Boulais. The rest of NU rallied behind her, though; Byrne and Or both claimed straight-set wins over ranked opponents, while sophomore Caroline Pozo won her first Big Ten match in five tries. In just her second singles match of the season, McColgan sealed the team win for the Cats with a 6-2, 7-5 victory.

A day later against Penn State, (11-11, 3-8) NU won the doubles point again. Byrne won her team-best 17th singles match of the season in two sets at the No. 2 spot, and Hand picked up another point for the Cats in the top slot. Graduate Carol Finke — who was honored alongside Or and senior Rheeya Doshi for their NU careers at the match — claimed the team win with a three-set victory at sixth singles.