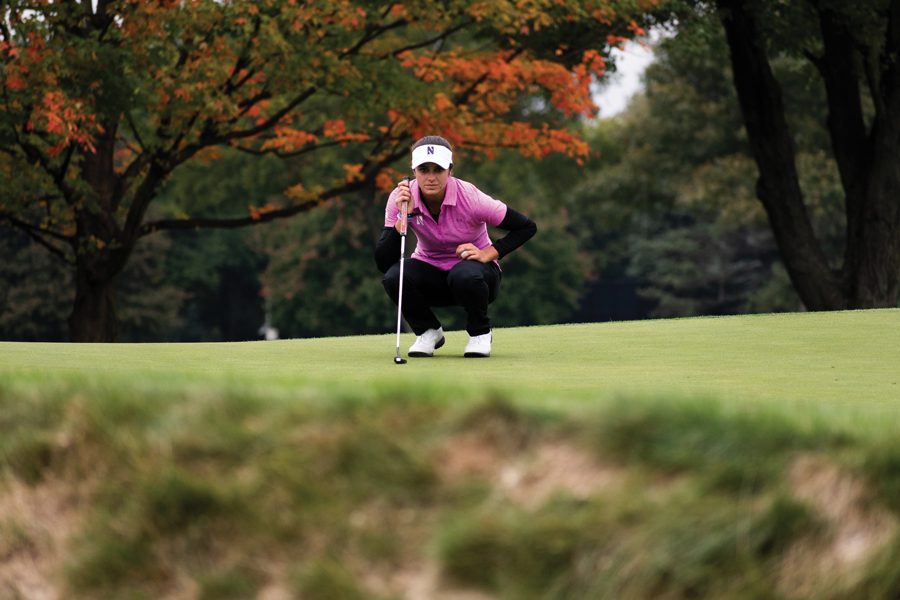 Brooke Riley surveys the slope. The junior finished tied for eighth at the Big Ten Championships.

Since Northwestern started its season in September, every team huddle over the last seven months has ended the same way. One golfer says, “one, two, three,” and the rest of the team responds “Big Ten Champs.”

This served as a constant reminder for the top ranked team in the conference. Regardless of what would take place during the 2018-19 season, what mattered most was the three rounds of golf in late April at the TPC River’s Bend outside of Cincinnati.

But the No.15 Wildcats didn’t even get to play three rounds. In the middle of persistent rain and cold Friday, NU’s golfers played a first round that lasted six hours as a result of constant weather delays. That led to an unusual amount of bogeys for a team that hasn’t played a match in the Midwest since October.

Then, Saturday’s round was canceled because of the rain and not rescheduled, so the Cats didn’t get the extra opportunity to improve on their 11-stroke deficit.

In the final round Sunday, NU shot 8-under-par — the best round any Big Ten team had all weekend — but there weren’t enough holes to make up for that lost ground. Having only 18 holes to come back from the deficit, NU finished at 6 over and in sixth place of a tournament it was heavily favored to win.

“It would have been completely different if we had been able to play yesterday,” junior Brooke Riley said.

Playing one round fewer than she expected, Riley said she didn’t know how she would assess her play. Usually, she accustoms herself to the course in the first round and spends the next two making adjustments. Because the second round of the tournament was canceled, she did not have that opportunity. Still, after a strong round Sunday highlighted with an eagle on her 36th hole, Riley led the team with an even-parscore and finished tied for eighth in the field of 84.

According to freshman Kelly Sim, who shot 2-over, the Cats struggled in the first round because it was “hard to keep ourselves warm.” Their last three matches took place in California, Arizona and South Carolina, a sharp contrast to the weather in Cincinnati.

After the first round Friday, the Cats shot 14-over, but they improved that score Sunday to 6-over, which allowed the team to bounce three spots in the standings on the second and final day of the tournament.

“We really wanted to win Big Tens of course, but today we really had that great team effort we want to see,” Sim said. “We just made a ton of birdies on the back nine today, and we can take that momentum going into regionals in a couple weeks.”

In the NCAA Regionals last year, NU finished in sixth place and qualified for the National Championships after another suboptimal performance in the Big Ten Tournament.

Riley, who led the Cats to that result in the 2018 NCAA Regionals, said the team has the ability to build off the success it had Sunday in its next tournament, where it will actually be able to play all three scheduled rounds.

“(Coach Emily Fletcher) was saying after my round today to not to disregard the way we all played today, which was really well,” Riley said. “Some teams just played better in the weather on the first day, and that was the only difference for us between winning this and not.”