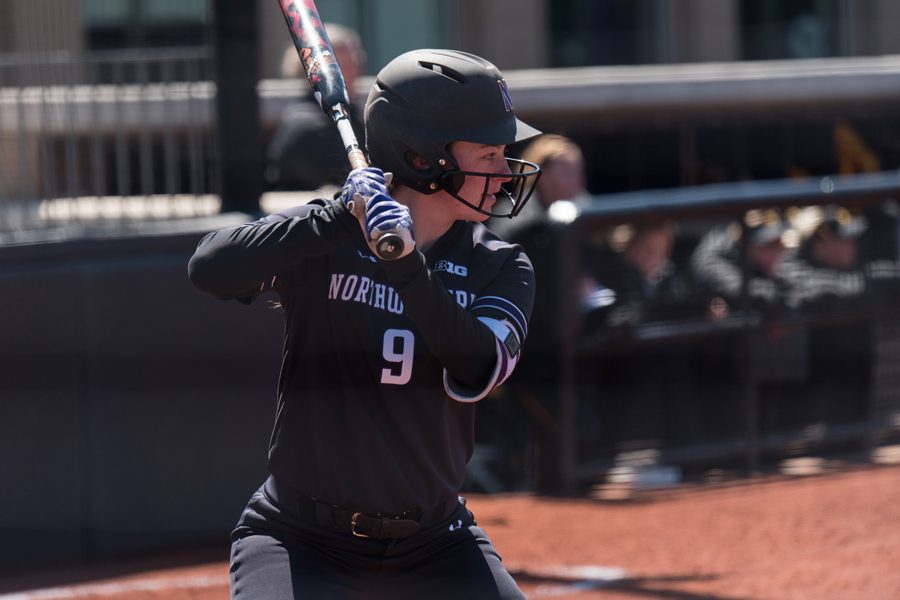 Lily Novak prepares to hit. The first baseman was honored for her four-year career in Sunday’s Senior Day win.

Will Northwestern ever stop sweeping? It doesn’t seem like it.

The No. 23 Wildcats accomplished their fifth series sweep of the season with three wins over Purdue this weekend, extending their win streak to 14 and perfecting their conference record to 15-0 — the best start to Big Ten play in NU history.

The Cats (36-7, 15-0 Big Ten) opened the series with an 11-1 victory Friday over the Boilermakers (30-20, 6-11), fueled by freshman catcher Jordyn Rudd’s first-inning grand slam and senior left fielder Morgan Nelson’s three-run homer in the third. Game 2, an 8-2 win for the Cats, featured another slugfest, with NU scoring five of its eight runs in the first inning.

“I really liked our balance in the batter’s box,” coach Kate Drohan said of those first two games. “We put a lot of pressure on them just by generating runners, and a lot of different people throughout the lineup stepped up to come up with the big hit. It took a bit longer (on Sunday).”

Though the Cats ultimately beat the Purdue 6-3 in the final game of the series, they trailed the Boilermakers by the third inning after failing to smash any hits. Freshman pitcher Danielle Williams ultimately broke open the offense in the fourth with a single to left field, which the outfielder fumbled, allowing Rudd to score and Williams to advance to second.

Freshman center fielder Skyler Shellmyer came to the plate and bunted, which Purdue third baseman Jenny Behan scooped up. However, her throw flew over the first baseman Lexi Huffman’s head into right field, allowing Williams to score easily. Shellmyer, sprinting around the bases, followed her teammate by sliding home safely for a “Little League” homer.

“Initially I was thinking ‘I’ll just get three,’ and then I look up rounding second base and see (Drohan) waving her arm,” Shellmyer said. “Then I saw the ball was nowhere near the infield, so I was really happy about that.”

Drohan said she wanted Shellmyer to try for home because the team needed to pick up some runs.

She called the moment a “pivotal play” in the game and added that she knew Shellmyer could beat the throw.

“She can scoot,” Drohan said. “At that point in the game, we weren’t really getting any hits, so we needed to put pressure on them.”

Though Williams gave up three runs of her own — two of which came from solo shots by Boilermaker freshman Kendall Chase — the Cats kept the lead, scoring runs off walks and fielder’s choices.

Sunday’s matchup also included a pregame ceremony to honor seniors Morgan Nelson and Lily Novak in one of their last home games. After a video montage of Nelson and Novak played, their families joined them on the field and the coaching staff presented them with framed jerseys.

Drohan said she appreciated the leadership Nelson and Novak showed this season.

“They’ve (led) in such an authentic, very real, and very caring way,” Drohan said. “And I think our younger players have thrived in the environment that they’ve created in the locker room for us.”

The senior duo has played over 300 games for combined, and they’ve hit over 30 home runs for NU.

Shellmyer said she’s grateful to have played with this year’s seniors.

“They’ve been so welcoming, inclusive, and understanding of our freshman problems and not getting mad at us for making mistakes,” Shellmyer said. “I love them.”