Lacrosse: Northwestern picks up most impressive win of the season with victory over Notre Dame 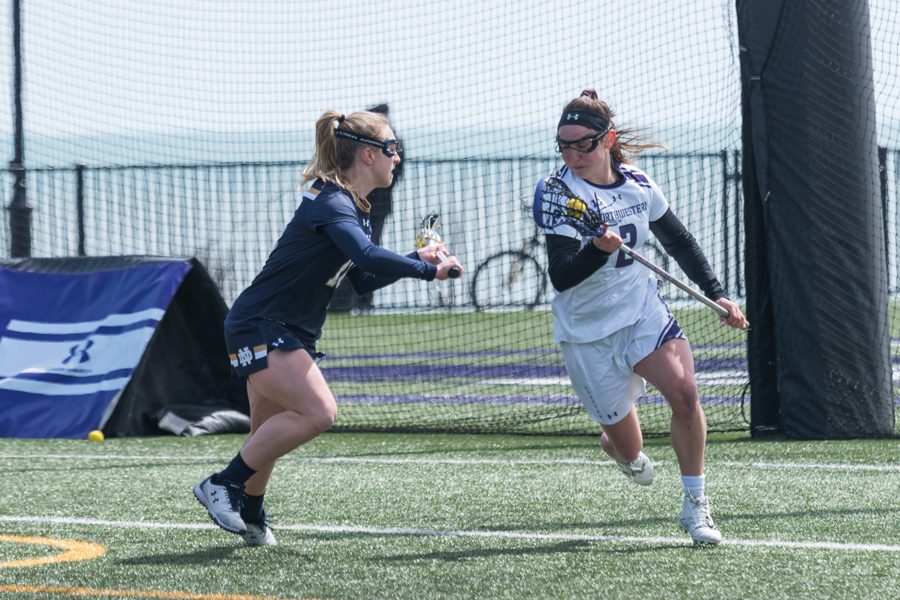 Selena Lasota makes a move. The senior’s five-goal performance helped lead the Cats to an upset win over Notre Dame on Saturday.

Northwestern is rounding into form at the perfect time. After getting trounced by No. 2 North Carolina earlier in the season, the Wildcats showed this weekend they have the talent to outperform the best teams in the country on any given day.

Though coming into the game with a top-two defense, the Fighting Irish gave up more goals to the Cats than any other opponent this season. NU’s offensive aggressiveness especially paid dividends in garnering free-position shots, where it almost doubled Notre Dame’s output.

Senior attacker Selena Lasota led the way for the Cats with five goals for the day, but NU stuck to their staple of scoring by committee and had multiple players on the scoreboard. Sophomore midfielder Lauren Gilbert chipped in three goals and extended her scoring streak to 15 games, while freshman midfielder Izzy Scane added another three.

The biggest surprise for the Cats came on defense, where senior goalkeeper Mallory Weisse racked up a career-high 14 saves. For most of the game, sophomore defender Kate Copeland face guarded Fighting Irish attacker Maddie Howe, who scored four goals in last year’s matchup but was limited to one point on Saturday.

Sophomore midfielder Ally Palermo suffered a lower-body injury with a little over 13 minutes left in the second half. Palermo had to be helped off the field and did not return to the game. Her status moving forward is uncertain.

NU will have five days of rest before traveling on the road to play Ohio State in its season finale. With a win, the Cats would finish the regular season with a .750 win percentage, their best mark since 2013.

Related Stories:
– Lacrosse: No. 6 Wildcats pick up third top-10 win of the season against No. 8 Michigan