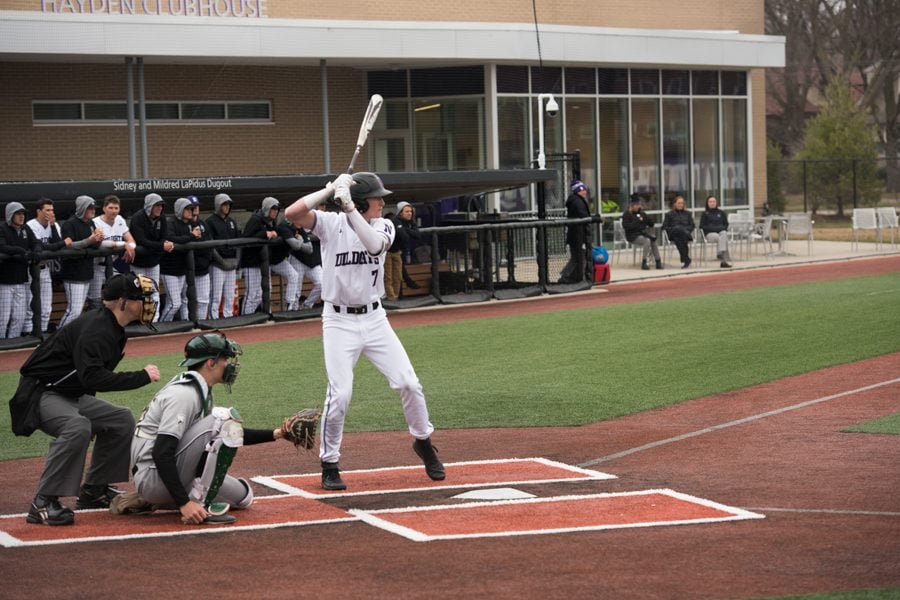 David Dunn steps up to bat. The freshman had only two hits in 10 at-bats during NU’s series loss to Michigan this weekend.

Change is good. For David Dunn, that maxim has rung true. The freshman center fielder underwent a change in his stance in advance of Northwestern’s series against Michigan, bringing his hands down a bit lower on the bat for comfort’s sake.

On Saturday, Dunn batted 2-for-4, an indication of what he hopes that renewed swing will bring as he warms into it.

“(I) felt good at the plate and just went out there and hit the pitches I needed to hit,” Dunn said. “That’s kinda where I want to be.”

But change takes time to manifest, as evidenced by Dunn’s performance a day later. NU (16-20, 5-7 Big Ten) and Michigan (28-11, 8-3) faced off in a double-header Sunday, after a contest scheduled for Friday was pushed back due to inclement weather. This time, Dunn struggled, failing to record a hit in six at-bats. The center fielder’s offensive showing was in tune with that of his teammates, as the Cats mustered just 13 hits and only three runs combined during the two games.

NU lost all three contests in the series and has now dropped five straight, a stretch that dates back to April 13, and has dropped the team four games below .500. Dunn said the Cats need to focus their efforts on getting two-out hits, tiring out the opposition and increasing offensive pressure.

“We just need to put together innings where we can create more than one or two runs,” Dunn said. “The two-out hits, it’s huge in college baseball and we need to do that a little bit more. Just string some at-bats along, pass it on to the next guy and get some runs on that scoreboard.”

Coach Spencer Allen said NU’s loss came down to the team’s lack of playmaking throughout the series.

To turn things around, the Cats need to limit their errors and walks. The team recorded seven errors and the pitching staff allowed ten walks in three games.

“We have to have all three phases going,” Allen said. “At times, we’ll pitch it well and at times we’ll swing it well, but of late the bats have gone a little cold. We’ve gotta get those going, creating options a little bit. Ultimately we have to make sure we’re not coming from behind because of what we do defensively.”

In the first game of the series, the Cats couldn’t end their poor run of form despite Dunn’s hits and a sixth quality start of the season for sophomore pitcher Quinn Lavelle — who struck out six and allowed just two earned runs in six innings. The team lost 4-1, their only run coming when freshman Shawn Goosenberg’s single drove Dunn home in the sixth inning.

NU fell again in the first game of Sunday’s twin bill, letting a tie game slip out of its fingers in the seventh inning and dropping a close 3-2 decision. In the second matchup, the Cats were wallopped by Michigan, surrendering 14 hits in a 10-1 loss.

“You look at a series like this, it makes it seem like we’re really far away,” Allen said. “We’re not. We’ve shown that we can play at a high level. Ohio State took two of three away from Michigan, and we swept Ohio State, so I don’t think we’re that far off. We have to continue to play good baseball.”