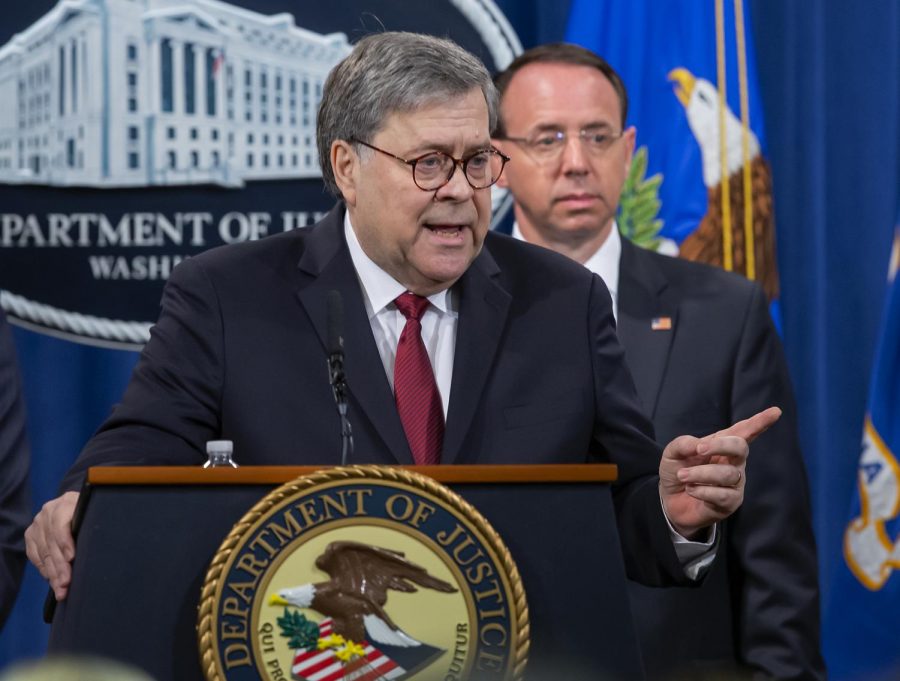 U.S. Attorney General William Barr, left, and Deputy Attorney General Rod Rosenstein hold a press conference at the U.S. Justice Department on April 18, 2019 in Washington, D.C. Illinois Democrats called for Congress to be given access to the full report on Russian interference in the 2016 election.

“It’s sad to see the Attorney General of the United States acting as if he were the President’s personal lawyer,” Duckworth said in a news release.

The Department of Justice released special counsel Robert Mueller’s investigation into Russian interference during the 2016 election and the president’s ties to the Russian government Thursday morning. The report did not clear President Trump of obstruction.

Before Attorney General Barr released the nearly 450 page redacted document, he hosted a press conference in which he defended Trump, repeating that the investigation found no evidence of conspiracy or collusion.

Democrats responded to the report, and Attorney General Barr’s involvement in its release. Illinois democrats called for Congress to be given access the full report.

“Attorney General Barr has clearly decided it is more important for him to act as President Trump’s spokesperson than the highest-ranking law enforcement official of our nation, but Congress has the constitutional obligation to perform oversight of the administration and this report makes that responsibility even more imperative,” Foster said in a release.

The #MuellerReport outlines disturbing behavior by @POTUS, including attempts to “curtail” the investigation. It’s essential that Congress and the American people hear directly from Special Counsel Mueller so we may better understand his findings. https://t.co/KKLZYMwnBL

Mueller’s report also detailed how Congress could make “obstruction-of-justice statutes applicable to corruptly motivated official acts of the president.” Mueller calls on Congress to decide further steps in the investigation.

“If we had confidence after a thorough investigation of the facts that the President clearly did not commit obstruction of justice, we would so state,” Mueller wrote.

Schakowsky called on Mueller to testify in a public hearing before Congress to explain the report and its implications. She said Barr’s speech was “unprecedented and inappropriate” and did not allow for the American people to disregard his characterization of President Trump.
“It is clear that we cannot take this Attorney General at his word, which is a dangerous situation for our nation,” Schakowsky said in a press release. “We need to study the full report now. We need to hear from Robert Mueller himself now.”

AG Barr’s appearance this morning was unprecedented & inappropriate. The nation’s leading prosecutor is serving as spin master for President Trump. The American people would be wise to disregard his unprofessional & unnecessary characterizations of @realDonaldTrump #MuellerReport

According to The Hill, House Democrats will convene Monday via conference call to consider these developments and further steps.

AG Barr should be reminded that he works for the American People. His shameless spin of the Mueller report, before Congress has had an opportunity to see it, underscores serious doubts about his impartiality. Congress and the American people deserve to see the full report. https://t.co/tFGLdQ6UCf

“Press reports describing ‘numerous conversations’ between the Department of Justice lawyers from the White House about the report further reinforce the concern that Mr. Barr is representing the interests of the President and not the people of the United States,” García said in a release.