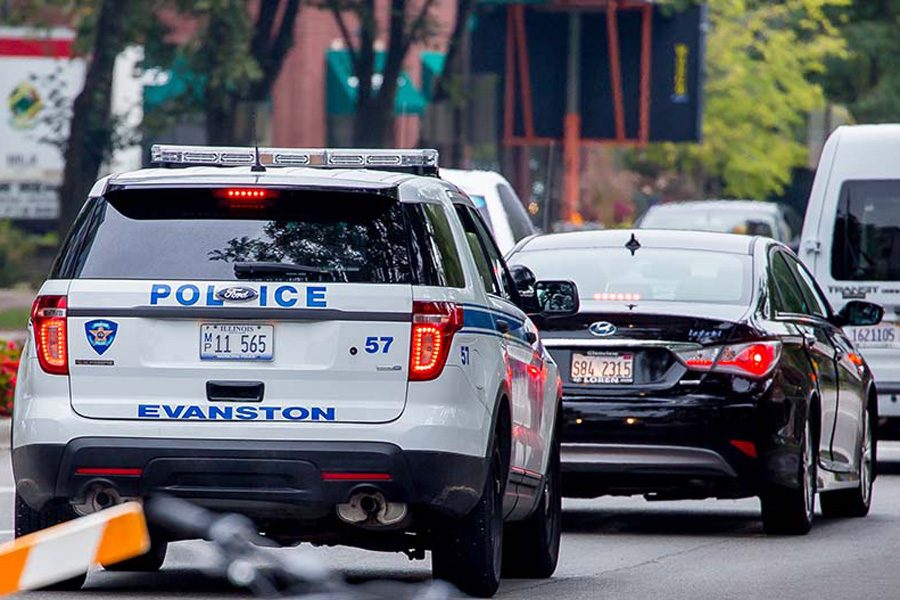 An Evanston Police Department squad car. EPD is one of five police departments being sued by a man wrongfully convicted of murder.

Jesús Sánchez, who was wrongfully convicted and served over four years in prison for murder, filed a lawsuit April 10 against the Evanston Police Department and two of its officers.

According to the suit, the two EPD detectives, Joe Bush and Phil Levy, used “coercion, threats, fabrication and misrepresentation” to force a false confession out of Sánchez and other witnesses. The complaint accuses the police departments of Wheeling, Wilmette, Skokie and Lincolnwood as well. Sánchez’s conviction was reversed in April 2018 by the Illinois Appellate Court.

In November 2014, Sánchez, then 18 years old, was convicted for the murder of Rafael Orozco. Orozco was killed in May 2013, outside a Wheeling apartment complex. Sánchez was in the vicinity and heard the shots, according to the suit. After the incident, Sánchez and the people he was with tried to get to his car, which was parked near the location of the murder.

As Sánchez and then 14-year-old Bryan Estrada began walking through the neighborhood, they said they saw gang members who allegedly began chasing and threatening them. Police witnessed the two running and detained them “without probable cause or reasonable suspicion,” according to the suit.

Sánchez said he spent the next two days in an interrogation room in the Wheeling Police Department, where he was not read his Miranda Rights and was not allowed to contact his mother, the suit says. Detectives also did not record Sánchez’s interrogation, which violates Illinois law.

Around 10 p.m. the night of the murder, members of the North Regional Major Crimes Task Force, made up of several officers from North Shore suburban police departments, arrived at the scene of the crime and began conducting eyewitness interviews, according to court documents.

According to the suit, Bush spoke with a witness who said he saw a white SUV in the area driving slowly without its lights on. Another detective spoke to a witness who allegedly pointed to a dark-colored sedan driving without its headlights on near the scene before shots were fired.

The suit alleges that detectives neglected these witness statements later — even when they were corroborated by another witness.

The suit outlines the ways the two EPD detectives, along with other officers and officials, “conspired and continue to conspire among and between themselves to deprive Jesús Sanchez of his constitutional rights.”

The City of Evanston declined to comment on the pending litigation.

The suit alleges that Levy wrote a false police report that presented probable cause and allowed him to detain Collin Scheffler, one of the people with Sánchez during the incident. After several hours of interrogation, the suit alleges that two officers used coercion and fabrication to compel Scheffler to give an account of the murder that was inculpatory of Sánchez.

Levy allegedly used similar tactics during a two-day interrogation of Leslie Rubio, another person with Sánchez that night. The suit claims that Levy, along with another officer, forced Leslie to change her account of the night “through coercion, threats, fabrication and misrepresentation” to one that implicated Sánchez in the murder.

The suit alleges that during the investigation process, Bush attempted to get another witness to change his account and implicate Sánchez. The suit says his attempts were thwarted though when the boy’s father came to the police station and demanded the interrogation end.

On May 4, 2013, Sánchez was charged with 12 counts of first-degree murder for the murder of Rafael Orozco and the attempted murder of another man at the scene.

The suit maintains that there was no physical evidence linking Sánchez to the crime. Additionally, it states that gunshot residue detection tests failed to detect residue on Sánchez and the people he was with.

Sánchez filed a motion to quash arrest and suppress his statements, outlining the ways officers used physical and mental coercion to elicit statements. The motions were denied after the “officers lied and said they did not arrest Jesús at the scene, did not coerce him and provided him with the required Miranda warnings,” the suit alleges.

Four years later, the Illinois Appellate Court reversed this decision. The court ruled that Sánchez did not voluntarily make the statements that implicated him and therefore should have been suppressed. In an opinion delivered by Justice P. Scott Neville, the court said the prosecution did not present sufficient evidence to prove Sanchez’s guilt.

The opinion recommends “significant sanctions for deceptions,” for the officers cited in the suit.

The suit also claimed Sánchez was subjected to “extreme curtailment of his liberty while in prison.” It stated that Sánchez suffered fear and anxiety causing him to attempt to kill himself while incarcerated.