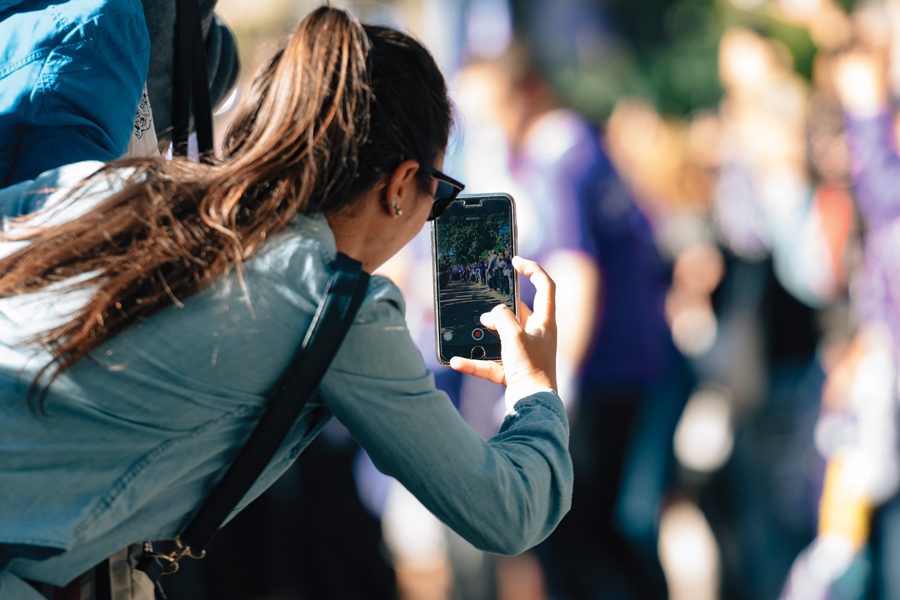 A parent takes a photo during Wildcat Welcome. Parents can connect to each other through various Facebook groups.

Northwestern mom Amy Brewer of Waco, Texas said she enjoys scrolling through the multiple notifications she receives everyday from the Northwestern parent and family Facebook page to read campus updates alongside memes and tips for surviving Northwestern. The only thing: this popular Facebook page she speaks of with over 2,300 members is an unofficial group created in 2014 as an alternative to New Student and Family Programs’ official parent Facebook page.

“The page is not run by the University and there’s no one from the University moderating it,” Brewer said. “That was done intentionally so that the conversation could be very open, and so that people wouldn’t have concerns over what they can or can’t post.”

Brewer said the overall spirit was one of “positivity,” so that even though posts aren’t regulated as they would be through NSFP, divisive posts mostly get ignored. Instead, she said most of the threads contain helpful advice for families new to Northwestern, with the winter weather tips being most valuable to her as a Texan.

Northwestern NSFP Director Patricia Hilkert organizes the official Facebook page and said their most popular post was one announcing canceled classes January 29-31 due to the polar vortex. She said she is still interested in what goes on in the unofficial group.

Brewer said the offshoot group now has a new subgroup specifically for parents of Bienen students, which has been invaluable for receiving concert content she wouldn’t have seen otherwise and has connected her more to her daughter.

McCormick sophomore Sarah Coughlin said the informal parent’s Facebook group was helpful as it helped her find a sublet for her apartment over the summer within an hour of her mother’s post, when she hadn’t had any luck asking around in-person.

Coughlin also said she bonds with her mom by making fun of some of the posts, including one memorable one about a parent’s outrage about Compass Group North America replacing Sodexo as dining providers. Coughlin said the parent posted about her child, who couldn’t find anything to eat with the new dining plan.

“I think people feed off each other in the comments,” Coughlin said. “Someone gets it started and then suddenly there’s 50 comments and everyone is creating this panic over something that is not a big deal.”

Coughlin said the Facebook group can also get serious, as her mom first joined after the March 14, 2018 gun hoax with a desire for up-to-date coverage. Coughlin’s roommate’s mother was on the group and recommended it to Coughlin’s mother.

Brewer echoed that sentiment when she said the most poignant moment from the group was when the mother of a suicide victim posted appreciating the sympathies and condolences others from the group had given her.

“We don’t know each other and are only connected through our kids being at Northwestern,” Brewer said. “But people are always offering to help if they can and that means a lot. It feels like an extension of family.”