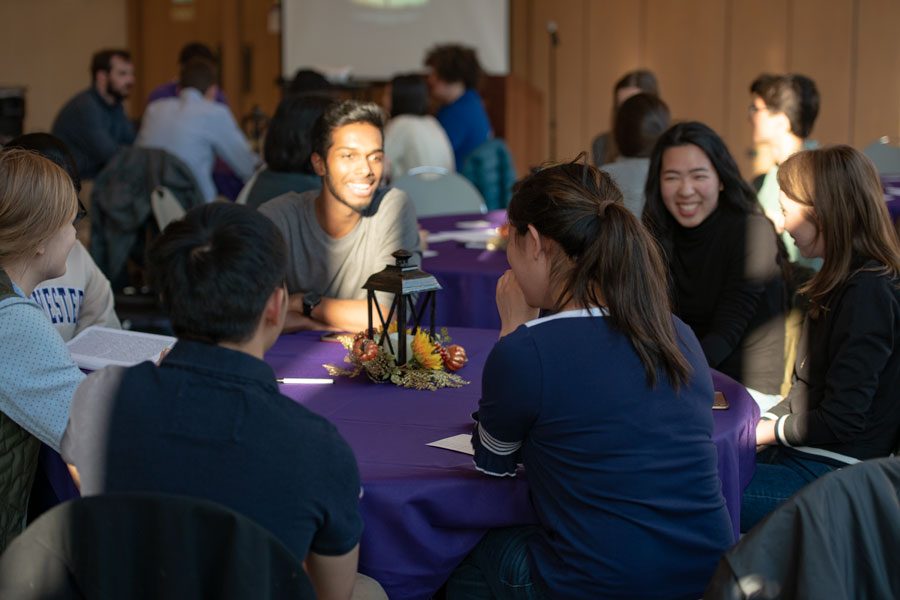 Students discuss the role of the messiah in Parkes Hall at an interfaith event titled “What are we waiting for?”. The event brought in faith leaders from the Islamic, Christian and Jewish traditions.

In the middle of Holy Week, two days before Passover and two weeks until Ramadan, faith leaders from three monotheistic religions came together to discuss a question at the center of their faiths: “What are we waiting for?”

More than 50 students and faith leaders attended the event Wednesday evening in Parkes Hall. Hosted by the Veritas Forum, a group dedicated to generating conversation on tough issues on college campuses, the event highlighted the Messiah, a fundamental topic for Muslims, Christians and Jews worldwide. Participants heard from speakers of each major Abrahamic religion and partook in small group discussions.

The event was held to “bring together leaders of different faiths, along with students of different faiths, or no faith and have an honest and open dialogue and conversation about specifically the messiah, but just about faith in general,” said Ben Williams, the lay pastor of Church of the Redeemer at Northwestern and one of the organizers for the event.

Following the event, Williams said he hopes students took this time to realize people can discuss issues of faith in a civil manner.

“I hope they would take away that you can honest and open with people about your beliefs, even if they completely clash with somebody else’s, and have a productive and interesting and non-offensive conversation,” Williams said.

Across faiths, followers await a messiah — a future redeemer. However, Islam, Christianity and Judaism often disagree on the specifics regarding a coming messiah and their redeeming power.

Each faith leader had 10 minutes to speak on their faith’s idea of a messiah. During his slotted time, Northwestern Hillel rabbi Brandon Bernstein said Judaism focuses on actions and its role in the coming of a messiah.

“The idea is if we merit redemption, we can make it come sooner,” Bernstein said. “There’s this… lovely idea of Judaism that our actions can hasten the coming of the Messiah.”

According to Christian tradition, Colquitt said, Christians await his return in order to establish his kingdom “in fullness” despite the accomplishments he already achieved.

Tahera Ahmad, director of interfaith engagement and associate chaplain for Alice Millar Chapel, explained Muslim salvation does not focus on a coming messiah.

“The role of the Messiah for us is very much that he is a profit of revelation, that he was a divinely inspired being,” said Ahmad. “But ultimately it is God’s grace, as well as the actions of humans, that will get to heaven or not, so to speak.”

Isaac Rasmussen attended the event because he wanted to understand how the concept of a messiah worked in other faith traditions. The McCormick junior said he left with a better understanding of the faiths represented at the event.

A self-described Christian, Rasmussen said he wants to learn more.

“I have some questions,” Rasmussen said. “I’m curious a bit about the Muslim perception of Jesus and his role.”