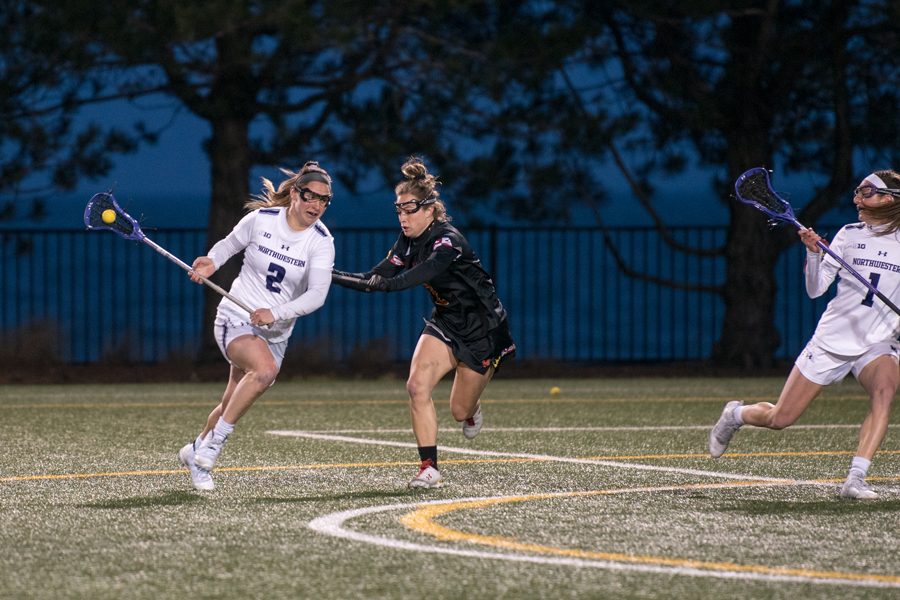 Selena Lasota makes a move on her defender. The senior will play her final regular-season home game Thursday against Michigan.

Northwestern faces yet another test Thursday.

A week after their heartbreaking loss to No. 2 Maryland, the No. 6 Wildcats (9-4, 3-1 Big Ten) are set to host No. 8 Michigan in another evenly-matched Big Ten game. The Wolverines (14-1, 4-1) are coming into Thursday’s game riding high off of a four-point victory against Rutgers.

NU will also be celebrating its Senior Day against Michigan. At the conclusion of Thursday’s game, the athletic department will hold a ceremony to honor the Cats’ 2019 class of seniors. Coach Kelly Amonte Hiller said the team’s best way to honor its seniors is coming out and putting together a strong performance.

“We’re just focusing in on playing really well tomorrow, and that’s going to be the best way to really celebrate our seniors is to come out and play our strongest,” Amonte Hiller said. “That’s been our focus all week, and I think it’s a great way to celebrate the parents and the sacrifices that they’ve made up until this point to support their kids.”

With the close of the regular season fast approaching, NU’s seniors took time to reflect on the uniqueness of this year’s team. Senior midfielder Emily Stein praised unselfishness and unity within the team this season.

“Just the culture of our team has been really fun to be a part of,” Stein said. “Everyone is very selfless and really just wants the best for each other. I think that translates on the field to very unselfish play and doing everything just for each other.”

After facing the Wolverines on Thursday, the Cats will go on the road this weekend to No. 4 Notre Dame on Saturday. The Fighting Irish (13-2, 5-2) are coming into the game fresh off dominant performances against Duke and Butler.

Amonte Hiller said she will treat these next two games as dry runs for the team’s upcoming tournament play.

“I think any time you get the opportunity to play two tough teams like that it’s great practice,” Amonte Hiller said. “Our focus is obviously on getting one win on Thursday and then we’ll move on to try to get one win on Saturday. But (that approach) is how you handle the Big Ten tournament and a Final Four.”

Related Stories:
– Lacrosse: Two monsoons drop on the Wildcats in loss – one from Mother Nature and one from Maryland
– Lacrosse: Northwestern set to clash against Maryland