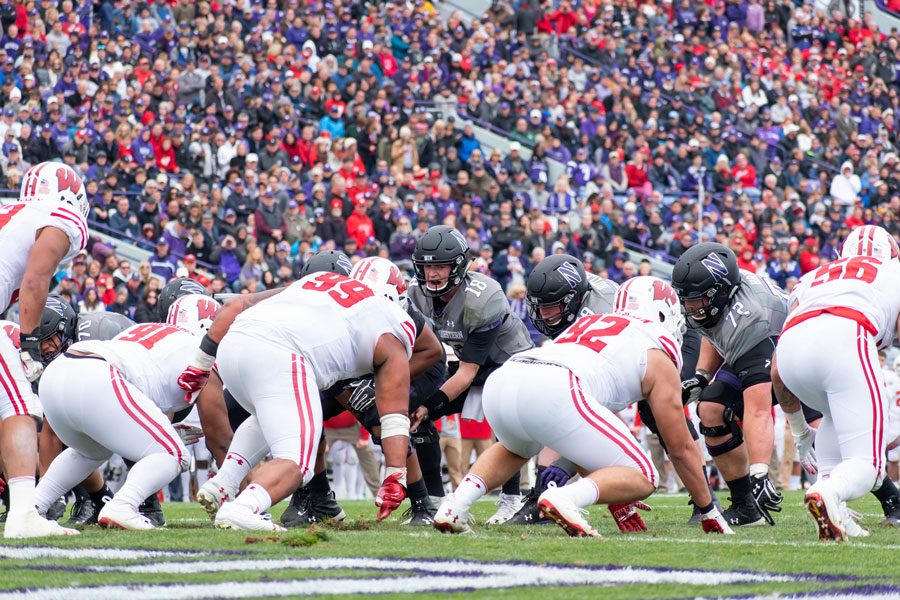 The offensive line squares up against Wisconsin. Coach Kurt Anderson was pleased with the group’s progress at the end of spring practice.

Kurt Anderson has been all over the football world — in the last 22 years, he’s played at Michigan, coached in the FCS, the MAC and the SEC and even worked as a coach for the Buffalo Bills in the NFL. His newest role, though, has led him right back to where he began.

Anderson grew up familiar with Northwestern. His father, Donald, played for the Wildcats as a wide receiver in 1967. He was raised on the North Shore, working as a ballboy for the NU men’s basketball team and watching as the Cats won back-to-back Big Ten titles in 1995 and 1996 as he played at Glenbrook South High School.

From near and afar, he has witnessed the program at all of its highs and lows. Now, in his first season as NU’s offensive line coach, Anderson’s ready to help it reach the next stage.

Anderson worked as a quality control analyst for the Cats during the 2018 season and was promoted to offensive line coach when Adam Cushing, who’d served in the role for 10 seasons, announced in December that he was taking the head coaching job at Eastern Illinois. He’ll now inherit one of NU’s most intriguing position groups heading into the 2019 campaign.

Thomas started all 14 of NU’s games at center last fall, and saw time at left tackle during his sophomore season in 2017. Slater earned Third Team All-Big Ten recognition at right tackle in 2018, and was the fourth-highest-rated offensive tackle in the conference, according to Pro Football Focus.

Earlier this spring, Anderson confirmed that Slater will be moving to left tackle for the 2019 season to replace Hance after spending two years on the right side. The Texas native said he felt confident coming out of the spring about the switch and about the state of his position group.

“We’re at an all-time high right now,” Slater said. “All through spring ball, we’ve been working to create a new identity, and we’ve definitely done that. We know that we are the guys that the team leans on. Ultimately the team goes as we go, and we’ve really taken a hold of that identity there.”

Juniors Gunnar Vogel will likely take over at left tackle after appearing in three games last season. Sophomore Sam Gerak and junior Nik Urban saw playing time last season as the line battled injuries, and will both look to make larger impacts in 2019.

NU’s overall play has often followed the success or struggles of its offensive line. In 2017, the front five gave up 19 sacks in the Cats’ mediocre 2-3 start. The trend continued last season — quarterback Clayton Thorson was sacked 11 times in NU’s first four games,but the line found its rhythm and helped then-freshman Isaiah Bowser rush for 866 yards and develop into the Cats’ first-string running back.

Starting strong will be important this season — NU has lost three of its first five games of the year in each of its past three seasons — and that begins up front. Three months into the job, Anderson was confident about the process has gone so far.

“These guys are so bright and articulate, so we’ve been able to open up lines of communication that probably I haven’t had at most of the places that I’ve coached,” the coach said. “To have those intelligent football conversations has eased the process. We’ve been able to move faster than maybe even I had planned.”