For these Northwestern students and Instagram influencers, phone eats first 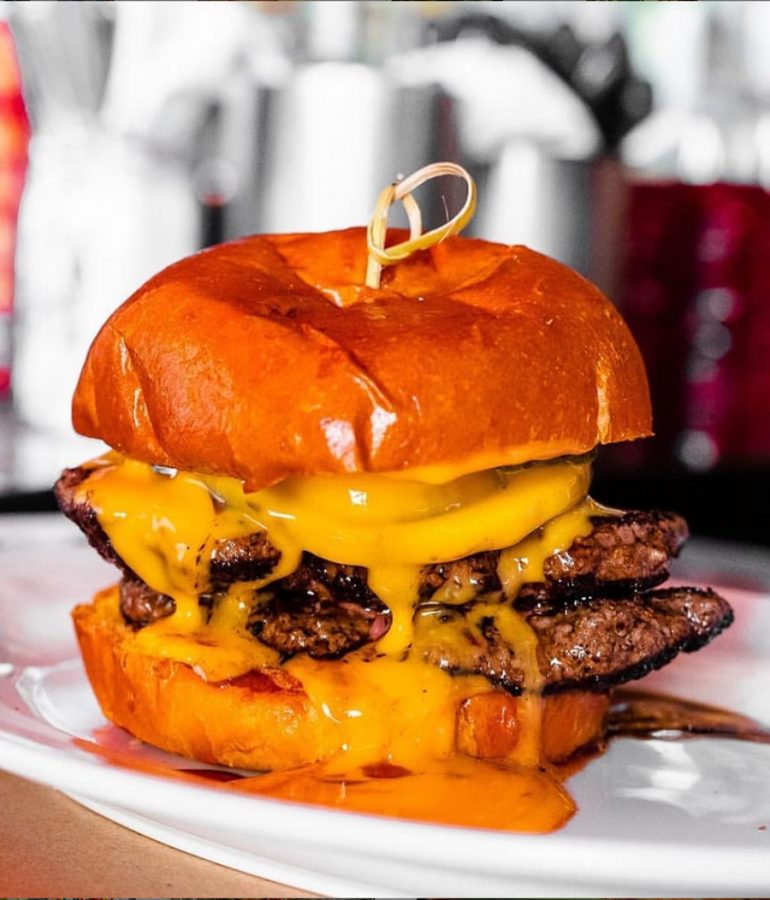 A burger from 5 Napkin Burger in New York City. The photo, posted to Grace Jaeger’s food account, was sent in by a follower of the account.

Many Northwestern students celebrate reaching 1000 followers on Instagram. Medill sophomore Grace Jaeger recently hit a different milestone: she now has more than 50,000 followers on the platform.

Jaeger started @nyfoodgram with her best friend during her freshman year of high school in New York City. She said they posted regularly for about a month before they began to forget about it.

“We picked it back up our junior year and actually started trying to get followers,” Jaeger said. “At that point, we only had a couple hundred followers. It was mostly our friends and spam accounts.”

Jaeger said they followed many other food accounts, attempting to gain exposure by getting re-posted on their pages. They also followed many of their account’s first followers to increase publicity.

As the account began to gain traction, however, Jaeger said they no longer needed to do so.

Jaeger said that now, although neither she nor her best friend currently live in New York, the account remains active.

Restaurants and companies from New York will send their food to the Instagrammers to photograph. Jaeger and her friend also take photo submissions and post those to their account as well.

“Over breaks, when we are back in New York, we will attend events or do partnerships with different restaurants if they reach (out) to us for meals,” Jaeger said. “We will go with the purpose of taking photos to share with our followers.”

However, she said the Instagram account takes a backseat while she fulfills the responsibilities of a full-time student at Northwestern.

“It’s a lot of people’s full-time jobs,” Jaeger said. “This is very much not our full-time job because we are both full-time students.”

Jaeger is not the only food influencer on Northwestern’s campus.

Communication freshman Sammi Tapper also maintains a food Instagram in her free time, which she, like Jaeger, started as a freshman in high school.

“I realized that I loved taking pictures of food, but I didn’t want to keep putting them on my real Instagram account,” Tapper said. “I made a whole other account for it.”

With over 600 followers, Tapper also puts time into increasing the account’s Instagram presence. In addition to following subscribers of other food pages, as well as using hashtags and shout-outs to her advantage, she primarily gains publicity through connecting with others.

“Whoever I meet, I tell them to follow it,” Tapper said.

Tapper said she hasn’t posted as much since coming to college, as she is often eating in dining halls. However, she still tries to find opportunities to update her feed.

“I think it’s so fun to take pictures of food and make it look pretty when I can,” Tapper said. “I plan to keep using it.”

Medill sophomore Mia Hirsch finds photographing food enjoyable as well. However, her passion for food doesn’t manifest in her Instagram, but through her journalistic work as the editorial director of Spoon NU.

Hirsch joined the staff immediately after getting onto campus. However, she said her interest in food began before she came to NU, during her senior year of high school. With the free time she had after getting accepted to Northwestern, Hirsch said she began cooking more and becoming more interested in food.

She said she prefers writing about food, as it gives her the opportunity to be lighthearted and comical.

“I’m not the kind of person who likes to do the hard-hitting investigative journalism,” Hirsch said. “I like the more witty, funny, blog-type writing which is what really appealed to me about Spoon.”

Although all three food fanatics are full-time students at Northwestern, they plan to continue their involvement with food-related pursuits.

“I have no intention of really ever stopping,” Jaeger said. “(Not) anytime soon at least.”

Related Stories:
– The fashion influencers of Northwestern: Students use digital media to connect with fashion companies