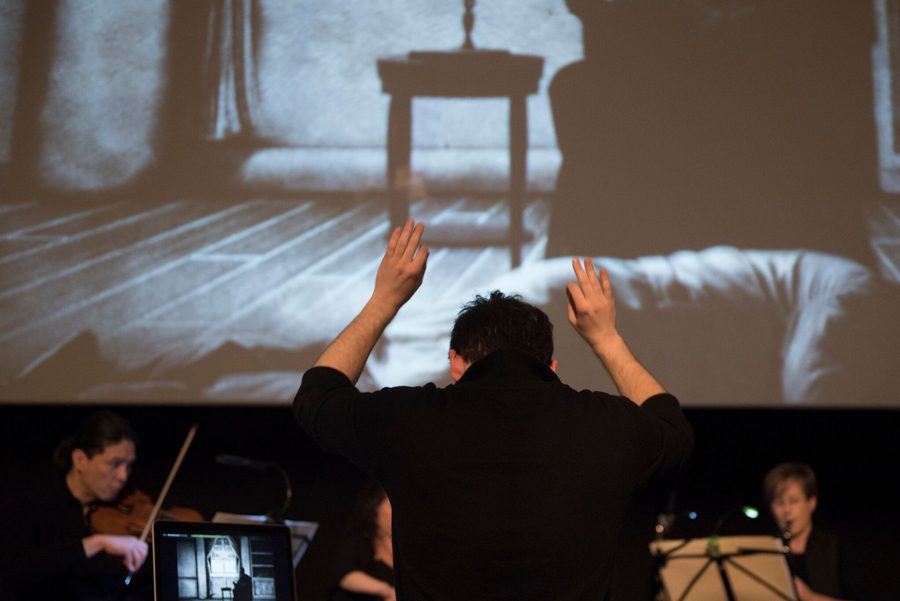 A conductor leads an orchestra at the Sound of Silent Film Festival. The festival commissions composers to write scores for silent films.

When Access Contemporary Music executive director Seth Boustead recalls planning and organizing the first Sound of Silent Film Festival, he admits that he had absolutely no idea what he was doing.

Fourteen years later, the event has evolved from its original inception as a “sloppy” production into a full-fledged, well-respected festival.

“Honestly a lot of the films were pretty bad the first year,” Boustead said. “A lot of them were student films, and I didn’t really know how to find really high-quality films. And then we didn’t have a conductor, we just kind of winged it… but it was fun. And it sold out. So I was like, ‘Okay we have something here.’”

The festival is hosted by ACM, an organization Boustead said aims to challenge the image of classical music as entertainment for “dead European guys with wigs.” The event commissions composers to write scores for silent films that are submitted by contemporary filmmakers. They are then played by a live band alongside the film at the Davis Theater.

This year’s festival will take place this Saturday and feature 15 silent films of different genres, ranging from dramas to animated shorts to documentaries.

Boustead said after the “shaky” first year, ACM worked to improve the festival by collaborating with local filmmakers, hiring a real conductor and organizing a real film panel. He added the festival now attracts high-quality films from around the country and even abroad, including a number of submissions from Iran — a country with a large silent film movement.

Peter Lograsso (Bienen ’89), who is the tuba player for this year’s Sound of Silent Film Festival, said this is his first time playing the score of a film. Lograsso, who currently working as a music teacher, said a friend introduced him to the Origin of Animal, a rotating group of musicians who will be playing at the festival. Lograsso said he is looking forward to playing with the orchestra in a unique way.

“When I heard what (the festival) was, I thought it would be a little bit of a challenge, something new to play along with the film,” Lograsso said. “That’s something I’ve never done before.”

“Hall of Fishes,” a film by Communication first-year graduate student Jennifer Boles, is one of the 15 cinematic pieces to be featured in the festival. The film, which was developed and created in a Northwestern class, turns 1960s footage from the Chicago Field Museum’s archives into a narrative. “Hall of Fishes” tracks the creation of a diorama at the Field Museum, for which the artist collected parts of a coral reef, in turn destroying part of the reef’s habitat.

The filmmakers will not be able to hear the score that the partner composer has written until the night of the festival. Boles said the process was “exciting, but scary.”

She said she is drawn to the silent filmmaking for its ability to let viewers come up with their own interpretation of the narrative. Boles added that she didn’t include narration in “Hall of Fishes,” because she didn’t want to force her own viewpoints on the audience.

“I want viewers to really experience the archive, and almost be immersed in it, and not have me tell you how you should feel when watching it,” Boles said. “My view of filmmaking is to let audiences experience it on their own and really think through what they see and what they feel in their own way.”