Northwestern alumni, staff star on and off stage in ‘Two Days in Court’ 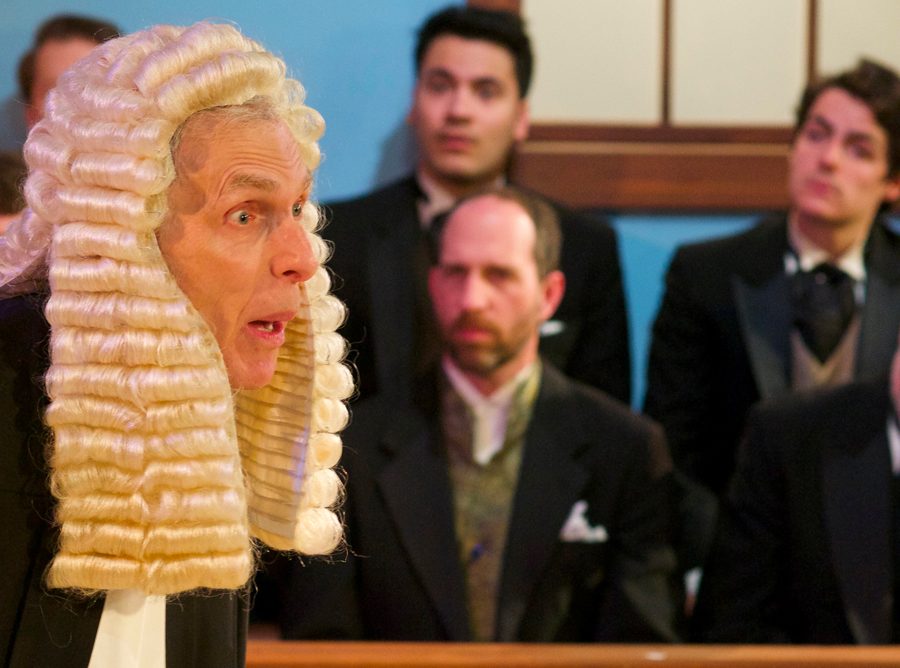 Kingsley Day acts as The Learned Judge in “Trial by Jury.” The actor said he likes the intimacy of City Lit Theater.

In City Lit Theater’s upcoming show, the courtroom is filled with demons in the first act and described as “riotous” in the second. And no, it’s not a live showing of C-SPAN.

“Two Days in Court” — a double-bill of very different one-act operettas directed by Terry McCabe (MFA Directing, ’80) — has a cast of 17 who play roles in both shows.

The show, which runs until May 26, features Lee Wichman (SESP ’99) as Mr. Scratch, or the devil, in “The Devil and Daniel Webster” and Kingsley Day, Senior Editor of Publications at Northwestern University, as The Learned Judge in “Trial by Jury.”

McCabe said this is likely the first time these shows have appeared on the same playbill, and that he liked the idea of pairing two shows that don’t seemingly belong together.

“I attribute this to growing up on Top-40 AM radio where they go from song to song and there was no segue,” McCabe said. “It’s like ‘the new Dean Martin record’ and then there’s ‘the new Rolling Stones record.’”

McCabe said the one-act-play, “The Devil and Daniel Webster,” is a story about patriotism and a testament to the strength of democracy. He added it’s a timely piece to see in the current political climate.

The director described the show — which has been parodied on “The Simpsons” — as “the American Faust story,” comparing it to a German legend in which a man makes a deal with the devil and lands himself a spot in hell.

“In this version, he is saved by the democratic institution of trial by jury,” McCabe said. “Daniel Webster can’t save him. Only the jury can save him.”

Wichman, a practicing psychotherapist who plays the aforementioned dealmaking demon, said his casting as Mr. Scratch is the role he would have chosen for himself from the get-go. He said it’s “very fun and juicy” to play the fiddle, torment people and recite an incantation on-stage.

Wichman has previously played Satan in other shows and added that if he could, he would play the part forever.

“I must be type-cast as this character,” Wichman said. “I can be as sadistic and treacherous as I want.”

The second act offers some comedic relief from the first act’s ghost story with “Trial by Jury,” a comic opera by satirists W.S. Gilbert and Arthur Sullivan. Day, who has played the baritone lead in all 14 of Gilbert and Sullivan’s operettas, said he has been hooked on their shows since he performed in one during high school.

Even so, he said, this production of the show is different than previous ones he has done because of the intimate setting of the City Lit Theater, which seats under a hundred people and has the same set for both acts.

“The advantage of this production is that it’s in a small theater,” Day said. “In my patter song about how I became a judge, I don’t have to force the sound at all. I can really let the words speak.”

Correction: A previous version of this story incorrectly referred to City Lit Theater’s upcoming “Two Days in Court” as a short–story–turned–folk–opera and Kingsley Day in the headline as an NU faculty member. “Two Days in Court” is a one-act play, and Day is a staff member.