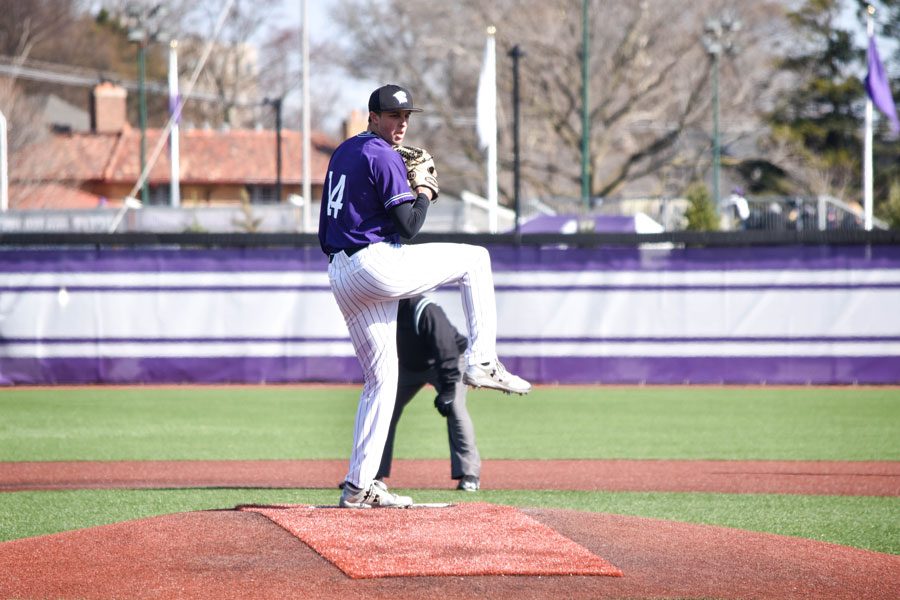 Parker Hanks prepares to throw. The freshman started his second midweek game this season against Notre Dame on Tuesday

For the past three weeks or so, as chilly temperatures spread across the Midwest, Northwestern’s bats heated up and had their best stretch of hitting all season.

But, on a day in which temperatures rose well above 60 degrees, the Wildcats saw their bats grow cold.

Erro opened the scoring in the top of the first when he took a 3-2 fastball pitch and pulled the ball over the left-field fence for a home run.

“I figured he was going to throw me a fastball,” Erro said. “I was a little bit late on his fastball earlier in the count. First inning, he does not want to put any runners on so I figured he’d attack me with a fastball and he did. I was able to put a good swing on it.”

The Miami native knocked in the second run in the sixth when, this time from the left side of the plate, he pulled a double into the right-field corner to score freshman catcher Jack Anderson, who reached on a walk.

Freshman left-hander Parker Hanks started his second midweek in a row, and after his best performance of the season against Milwaukee ran into some trouble against the Fighting Irish.

In the first and second innings, Notre Dame managed to load the bases against the left-hander. In the opening frame, three straight batters reached in three different ways — Spencer Myers singled, Niko Kavadas reached on an error and Jack Zyska walked. Hanks got one strikeout, but Daniel Jung managed to knock in a run on a fielder’s choice.

In the second, Hanks managed to get two batters out before seeing the bases juiced via two singles and a walk. Zyska took advantage of the opportunity and singled home two runs to make the score 3-1.

Carter Putz roped a one-out triple to center field in the third inning to put another Fighting Irish runner in scoring position. The next batter, Jared Miller, laid down a squeeze bunt and the ball went right back to Hanks. On contact, Putz broke towards home. But the ball was hit hard enough that Putz was dead at the plate. But Hanks did not field the ball perfectly and instead of getting the runner at the plate, got the easy out at first.

“We had time. He saw the runner coming and I think we have time to make that play,” Anderson said. “From him, what he said, he kind of bobbled and wanted to get that sure out so he went to first.”

Four arms followed Hanks out of the bullpen — senior righty Danny Katz, sophomore right-hander Anthony Alepra, sophomore lefty Jack Pagliarini and sophomore left-hander Ryan Bader. Of the four, coach Spencer Allen said Pagliarini’s performance was one of note. The sophomore southpaw pitched one inning, but threw only nine pitches, including seven strikes, to get two groundouts and one fly ball.

Tommy Vail earned the start on the bump for Notre Dame, and impressed over five innings of play. He had allowed only one baserunner while throwing 41 of 64 pitches for strikes. After Vail, Shane Combs threw one inning before Andrew Belcik picked up a three-inning save.

Allen said the team did not make many adjustments when up against the Notre Dame arms. Erro, who is now 8-for-18 in four career games against the Fighting Irish, said his previous experience against them prepared him for what to expect against their arms Tuesday.