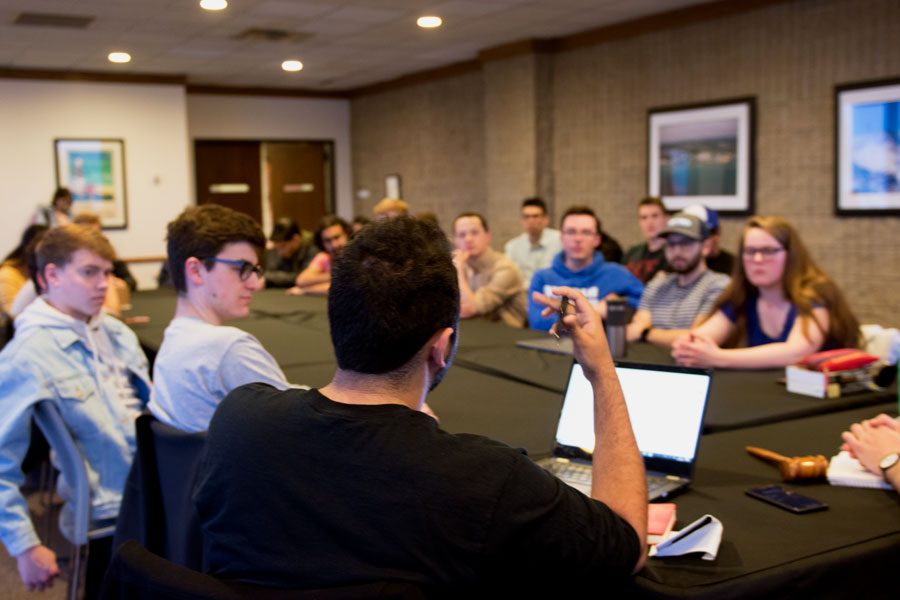 Co-President of Northwestern’s Political Union Jahan Sahni speaks. The Weinberg junior argued that the cancel culture that has arose in recent years is harmful for society.

Going into the discussion, cancel culture was defined as a “phenomenon” where a group of people engage in reducing monetary, moral and public support for a person, event or organization because of past actions or comments that were deemed harmful or “unsavory,” said McCormick junior Ian Odland, who moderated the debate.

The debate was led by Weinberg junior Jahan Sahni, co-president of Political Union, who argued that cancel culture was harmful and Weinberg junior Romie Drori, the liaison for College Democrats on the Political Union, who argued for the opposition. The event was organized in segments to allow both Sahni and Drori to give their opinions and was then opened up to the general group.

Sahni opened up the discussion by saying “everyone makes mistakes,” and cancel culture could be harmful because the people who are accused — mostly on social media platforms like Twitter — are not given their due process.

“There does exist this dark side of cancel culture,” Sahni said. “It effectively perpetuates belittling certain individuals. It is effectively just organized bullying in an adult sphere.”

Those who argued that cancel culture was not harmful described it as a tool to hold the powerful accountable. One supporter framed the #MeToo discussion through the lens of cancel culture by saying the power of “canceling” someone balanced the traditional power structures by giving the accuser support over the more influential celebrity.

Celebrities like Louis C.K., Roseanne Barr, Kanye West and Tiger Woods were also brought up by both sides of the debate. The cancellation of Roseanne Barr’s show “Roseanne”, Drori said, was a prime example of cancel culture being effective because a group of people worked together to boycott the celebrity over her racist comments.

“It strikes me as fundamentally democratic the idea that people can band together and voice disapproval for something that is heinous,” Drori said. “And for them to not support something as a collective that doesn’t line up with their views, that’s essentially democratic in my eyes.”

Those who were in agreement that cancel culture is harmful said that it presented a slippery slope in which people being called out or “canceled” may lead to stymying their rights to free speech.

Some argued the term “canceling” was dehumanizing in and of itself and presented problems with concepts like rehabilitation. Weinberg junior Dominic Bayer, the Political Union’s liaison for College Republicans, said the realities of cancel culture present it as a modern-day witch hunt where people are deprived of their due process.

“Cancel culture is actually harmful to society because it suppresses people’s speech and punishes them without giving them the chance to even respond to the accusation or providing them an avenue to correct their mistakes,” Bayer said.