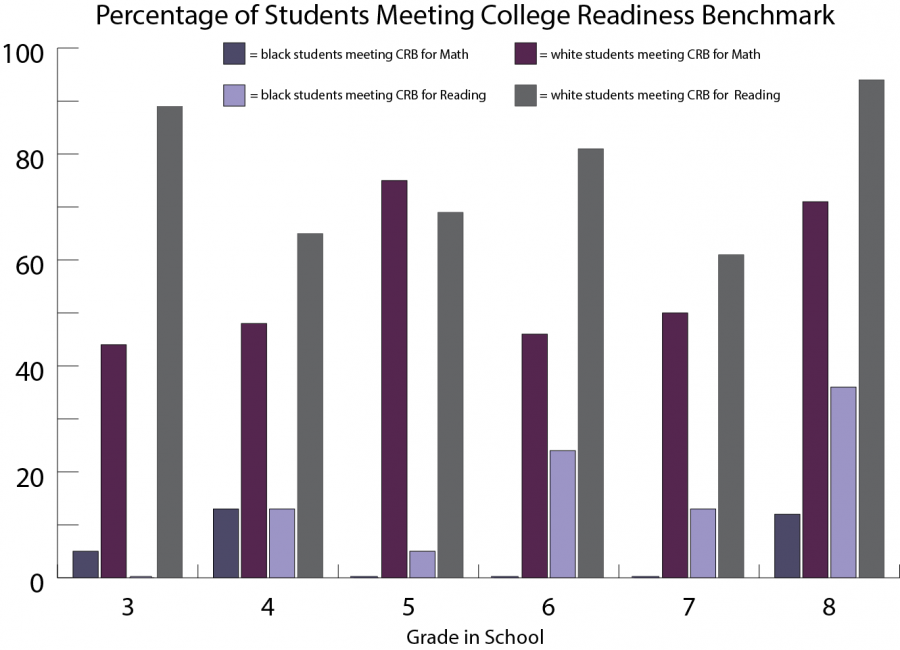 According to MAP scores, no black students at King Arts meet college readiness standards in the third, fith, sixth and seventh grades. Parents have asked for more cooperation with administration to solve the issue.

In the email sent by Black Parents of King Arts, King Arts Parent Teacher Association and ONE King Arts, parents expressed concerns with the administration’s involvement in the town hall and asked that they listen and work more closely with black parents at the school.

The March 22 town hall sought to address disparities in the results of the latest Measures of Academic Progress scores between black and white students. According to the MAP scores, no black students in the third, fifth, sixth and seventh grades at King Arts met the college readiness benchmark in math or reading. Black students also made up a larger part of the bottom quartile in reading and math than any other demographic.

“You have neglected to allocate sufficient time, energy and resources to the issue of eradicating these racialized disparities at the level it requires,” the email said. “We do not trust that you truly understand that there is a state of emergency at King Arts.”

While school administrators and parents spoke at the March town hall, the district did not provide a presentation. According to an email sent to The Daily by parents, district officials agreed to provide a presentation to address steps forward. However, a day prior to the event they decided they would no longer participate in the town hall but would still attend.

In an email to The Daily, District 65 Superintendent Dr. Paul Goren said he hears and respects the concerns raised by the organizations at King Arts. However, Goren did not comment on why the district decided not to present at the town hall.

“My team and I are committed to continue our work with the King Arts parents and have scheduled another in-person follow through meeting for early May,” Goren said in the email. “My door remains open for dialogue and problem-solving.”

Abdel Shakur, a King Arts parent and member of the Black Parents of King Arts, attended the meeting. He said parents and district officials went over follow-up questions regarding the data.

He said the inequity between black and white students is an issue that has been present at the school since before Goren became superintendent. At the same time, he said there is an urgency to address this issue and emphasized the role parents have in the matter.

“The thing that’s been kind of disturbing is they don’t seem to get how partnership with parents really is in their best interest and is productive when we’re kind of held as equal partners,” Shakur said. “The thing that was most disappointing about the town hall was that we set it up so that all the different stakeholders to kind of be heard and kind of show vision for what this goal is going to be or what it could be.”

The coalition of parents submitted additional follow-up questions regarding the data and a response expected by May 2nd.