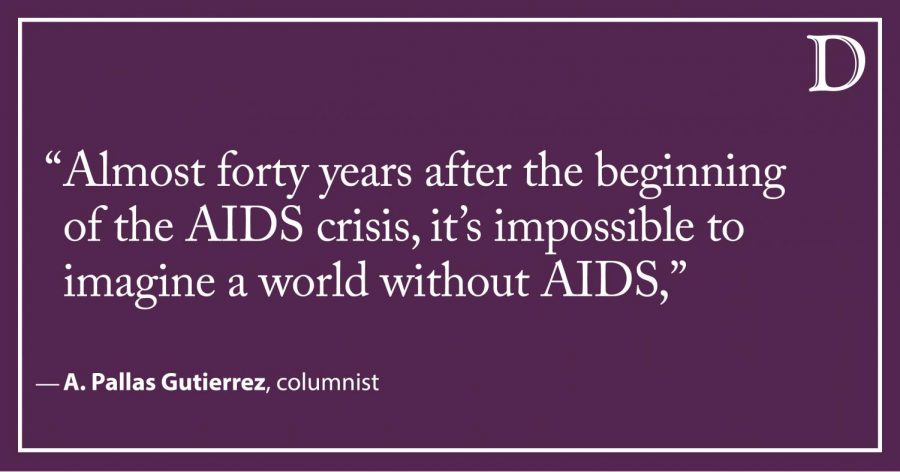 This is the ninth column in “50 Years of Queer Anger,” a series examining LGBTQ+ issues in the United States since 1969.

On April 24, 1980, the CDC was informed that Ken Horne, a resident of San Francisco, was exhibiting Kaposi’s sarcoma, a type of cancer that, until that point, had mainly been found in old men. On June 5, 1981, the CDC’s “Morbidity and Mortality Weekly Report” included an article about five unexplained cases of Pneumocystis carinii pneumonia in five young gay men living in Los Angeles. The illness was then reported in San Francisco, and by 1984 at least 800 people had reported symptoms of what was originally called gay-related immune deficiency, or GRID. If you told any of those diagnosed that they had AIDS, none of them would have understood.

Almost 40 years later, it’s impossible to imagine a world without AIDS. HIV/AIDS education is required in 33 states and the District of Columbia. Events like World AIDS Day, organizations like (RED) and celebrity fundraisers like Magic Johnson, who has been living with HIV since 1991, have made AIDS a somewhat normalized part of the national American conversation about health.

However, recent events have made, at the very least, one realization necessary: The AIDS crisis is not over.

By no means is the AIDS crisis in America as devastating as it was in the 1980s and ’90s, but that does not mean it can be simply dismissed. In 2017, there were 38,739 new HIV diagnoses in the U.S. Black queer men made up 26 percent of those diagnosed, the most of any single group. This is due to a number of societal factors, including poverty, stigma and lack of access to health care.

Pre-exposure prophylaxis, a drug intended to stop HIV negative people from contracting the virus, has been making national headlines over the past few months due to its failure. As of October 2018, six cases of men on PrEP contracting HIV had been reported internationally. However, considering that 77,120 people were on PrEP in 2016 and that there was an average increase in users of 73 percent per year from 2-12 to 2016, these cases indicate a very small proportion of people on PrEP. Instead, it is crucial to talk about who has access to PrEP and other AIDS care.

Nearly 50 percent of people taking PrEP in 2016 lived in New York, California, Florida, Texas, and Illinois, but the Southern U.S. made up 52 percent of new HIV diagnoses and only 30 percent of PrEP users. Despite the renaming of AIDS, the stigma of it being a “gay-related” sexually transmitted disease has not faded.

Cost is an additional barrier to treatment. Truvada, the brand name of PrEP, is manufactured by Gilead Sciences, which charges $2000 per month or more for the medication —  despite it having a production cost of less then $6. People are afraid of outing themselves by getting treatment, are unaware of their status or simply don’t have the resources to be educated or protected against HIV. Since HIV/AIDS is still largely associated with gay people and sex workers, for some people being open about their status feels like admitting a moral failure. Anyone can contract HIV/AIDS, but societal stigma is very powerful.

The HIV/AIDS epidemic is far from over. Although an HIV diagnosis is no longer a death sentence, living with HIV/AIDS is still incredibly expensive, as well as physically and emotionally taxing. National and international stigma around HIV is still very real, and prevent people from getting the treatment they need. The fight against HIV and AIDS, both at home and abroad, must continue.

Pallas Gutierrez is a Communication first-year. They can be contacted at pallas2022@u.northwestern.edu. If you would like to respond publicly to this op-ed, send a Letter to the Editor to [email protected]. The views expressed in this piece do not necessarily reflect the views of all staff members of The Daily Northwestern.