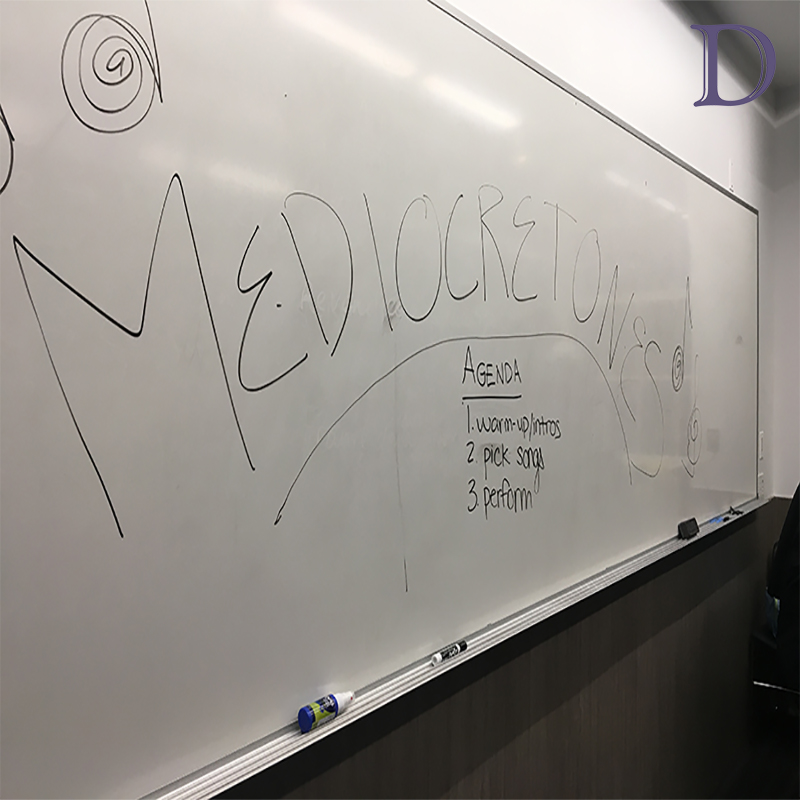 HEENA SRIVASTAVA: From The Daily Northwestern, I’m Heena Srivastava. Thanks for tuning in. This past Wednesday, The Mediocretones, an amateur a cappella group, hosted their first-ever auditions in Kresge Centennial Hall, attracting about thirty people.

HEENA SRIVASTAVA: This is SESP junior Arzu Singh. After thinking about the idea for two years, Singh has finally made her satirical spin off a traditional a cappella group a reality.

ARZU SINGH: First it just sort of started as like a bit. Kind of a joke I would bring up a lot especially when we were like singing in the car or we’d go to an a cappella group performance. But then I realized that I should do it.

HEENA SRIVASTAVA: At the beginning of auditions, Singh explained the try-out process. The criteria was simple: sing a song, and if your singing skills meet their low expectations, you’re in. Experienced singers are out.

ARZU SINGH: You will pick a song and then perform it as a group. But do not worry because you can have music in the background, Raghavendra will beatbox for you. If you’d like. And the only fear is that you are too good. So don’t be self-conscious, this is all for good fun. Any questions?

[VISHAL GIRIDHAR BEATBOXING “KISS ME THRU THE PHONE” BY SOULJA BOY]

RAGHAVENDRA PAI: Time-out. Vishal, that was amazing beatboxing. You are not allowed in the group. No, you’re not allowed. You’re out.

HEENA SRIVASTAVA: The group put it to a vote, and Giridhar was ultimately allowed to stay. Pai said he came out to support Singh both as a judge and a beatboxer when needed. As part of Northwestern’s South-Asian interest a cappella group Brown Sugar, Pai is too good to be in the group but still brought his expertise to auditions.

RAGHAVENDRA PAI: I came out today because one of my really good friends, Arzu Singh, organized this, and I wanted to show her support. And by show her support, I mean I was forced to show. But that’s okay.

HEENA SRIVASTAVA: Weinberg sophomore Jessica Waldman sang “The Climb” by Miley Cyrus for her audition. For Waldman, The Mediocretones were a perfect fit.

JESSICA WALDMAN: There has never been an event that was made more perfectly for me. I love singing. I love performing, but I have no talent. Well, I have mediocre talent. So, I was just really excited for an opportunity to finally find an outlet to perform at Northwestern.

HEENA SRIVASTAVA: One thing everyone who auditioned had in common was their love for performance, regardless of talent. I asked a few auditioners their favorite song to sing in the shower.

DIANA ROLDAN: Right now it’s “Sucker” by the Jonas Brothers. But I’m very heavily influenced. So it could be anything. Last week it was “Closer” by Tegan and Sara. That’s a good song.

PRIYA KINI: “A King is Born” by Aloe Blacc. I don’t know if that’s how you say his name.

RAGHAVENDRA PAI: Also like, scatting. Like *mimics scatting noises*. I can’t actually scat. Like I scat in the shower and then I don’t really scat really well not in the shower.

VISHAL GIRIDHAR: I don’t really sing in the shower, but right now, “Old Town Road” has been in my head.

RAGHAVENDRA PAI: I also don’t really sing in the shower. I like take like five minute showers. Quick in. I take, like, cold showers. It’s an experience.

RAGHAVENDRA PAI: I also really like the song “Mahna Mahna” by The Muppets. [Sings Mahna Mahna]

HEENA SRIVASTAVA: That was Waldman, Pai, Giridhar, SESP junior Diana Roldan, McCormick freshman Priya Kini, and SESP sophomore Bijal Mehta, all of whom made it past auditions. Singh closed out auditions by doing her own rendition of “American Boy” by Estelle.

ARZU SINGH: It reminds students that it’s not always about perfection and being the best. It’s about finding joy in what you do and creating spaces to have fun. And I think that can sometimes be lost in college, you know, especially at a high-achieving place like Northwestern. So I just hope it creates a kind of unique place on campus where everyone is there to have fun and there is no sort of end goal or resume building or any, like, desire for, like, status or being better than another group. I think it creates a space where fun and community is the priority and that’s really special.

HEENA SRIVASTAVA: Thanks for listening. This has been Heena Srivastava, and I’ll see you next time.