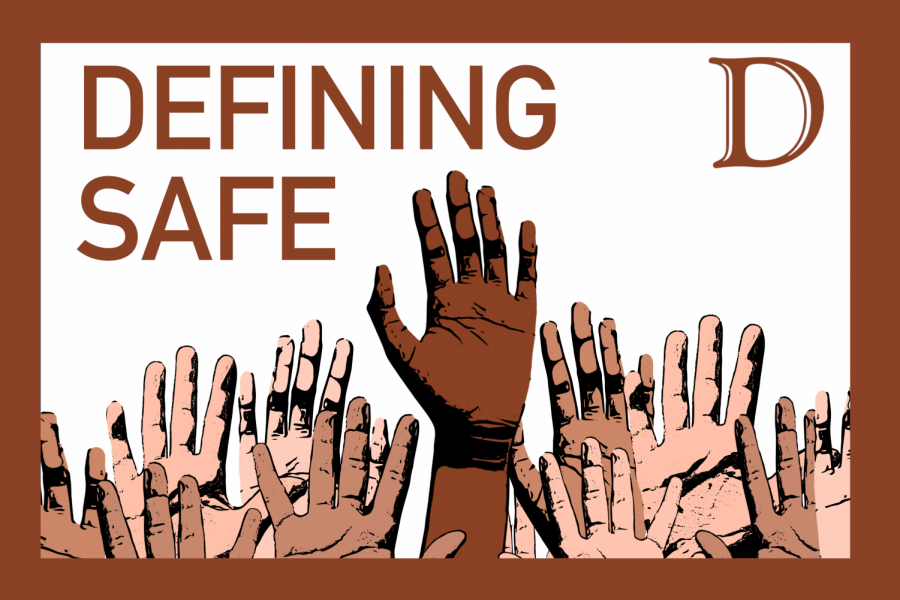 (Editor’s note: Adrian Wan, who is featured in this podcast, is a Daily staffer)

CASSIDY JACKSON: From The Daily Northwestern, I’m Cassidy Jackson. Thanks for tuning in. According to Northwestern’s Global website, 5,500 international graduate and undergraduate students attended Northwestern in 2017. In this installment of “Defining Safe,” I sat down with a few international students to hear what safety means to them.

ARUDI MASINJILA: It’s frustrating sometimes when you realize how little American students know about the rest of the world, when we’ve been bombarded with American cultural references, American like knowledge, for like all our lives. I know so much about the U.S. I knew so much about it before even stepping foot into the country. Then like you come to the U.S. and people don’t know, you know, like basic world geography.

CASSIDY JACKSON: This is Medill sophomore Arudi Masinjila, a student from Nairobi, Kenya. As an international student from Africa, Masinjila has been frustrated by her peers’ ignorance of the continent.

ARUDI MASINJILA: It’s so homogenizing and it’s very frustrating, especially given the diversity of the African continent. It’s like over 2,000 languages, 54 countries and people just see it as like one country or one thing, or you know, have certain assumptions about it. I remember also during Wildcat Welcome when I introduced myself to someone. We were talking about our parents. He’s like, “Oh, you know, what does your mother do?” And I was like, “Oh, yeah. She’s a lawyer blah blah blah,” and then he, like the shock on his face. Like his face turned so quickly and then it registers, like, oh, he didn’t expect like my mother to have a quote-unquote “professional career” given where I come from was how I read his reaction.

CASSIDY JACKSON: Medill sophomore Adrian Wan, from Shenzhen, China, said he has also noticed preconceived notions about Chinese international students at Northwestern. According to Wan, Chinese international students are generally seen as a population that keeps to itself. For part of his freshman year, Wan said he fought hard against this stereotype, aligning himself with only American friends. Later on, though, Wan realized he could still hold onto his Chinese identity while navigating Northwestern’s campus.

CASSIDY JACKSON: What did that look like when you were trying to like abandon that side of your identity? What were things that you were doing that kind of like showed that like abandonment?

ADRIAN WAN: Most people tend to think that like the party culture is like a super necessary part of American culture. So my freshman year fall quarter, I would just go to different parties, hang out with American white friends and like taking like quite high quality Instagram, Instagrammable photos and post it on my social media which is pretty stupid in hindsight. But then like one night, I auditioned for Refresh and then I received an email that night when I was at a party that I got rejected by Refresh and I was just feeling super depressed. I feel like, a month into my freshman year, I haven’t achieved anything and I feel like I was just a total failure. And then I drink so much that I passed out, and I was transported to the hospital and spend one night in the emergency room. I just realized like there is a lot of cost like, like in terms of like going to parties in order to be an real American student. So that’s something that really woke me up.

CASSIDY JACKSON: Along with questioning his involvement in Northwestern’s party culture, Wan also started to take a deeper look at his friendships.

ADRIAN WAN: For those American students who I usually like went out to party with, they weren’t actually willing to listen to how I feel. They were just someone that they can go to party with. And for my Chinese international students, or like other international students in general, they would say OK you since you’ve already left our community, go find someone else. So I feel like I was stuck in between. I didn’t know which way to go.

CASSIDY JACKSON: Medill sophomore Amy Ouyang, from Shenzhen, China, had a different experience. A graduate of Miss Hall’s School in Massachusetts, Ouyang had already tried hard to learn about American culture and fit into American friend groups. She left that in her past when she came to Northwestern.

AMY OUYANG: When I was in high school, I tried really hard. I watch every show that Americans do and watch and I, you know, besides doing homework, I just binge-watching those TV shows for example, so that I can have something to talk with them. I tried really hard, and was like really tiring and time consuming, but at Northwestern, I didn’t really try that hard. I mean I formed those really close relationship with those domestic student because we just, you know, we happened to share the same interest.

CASSIDY JACKSON: Now, as a sophomore, Wan shares similar views on friendship as Ouyang. If a friendship is meant to be, cultural differences won’t matter.

ADRIAN WAN: At first, I thought that if I still hold on to my Chinese identity, American students would not be willing to like socialize with me. But I feel like this is very incorrect assumption, because for those people that really care about you, they will not care about like what is like what your first language is, like what kind of culture you identify yourself with. Like it’s only if they are more willing to accept the culture and have to respect your culture can they be real friends.

CASSIDY JACKSON: Beyond support from their peers, international students can seek help from the Office of International Student and Scholar Services. However, Ouyang said she wishes the office was more supportive. She expected them to have more programming and even host multicultural events, like the Lunar New Year, but student groups have taken on that burden instead. The officer also couldn’t answer her questions about driver’s licenses.

AMY OUYANG: I want to get a driver’s license and then in order to get that you had to get a social security number and in order to get Social Security number, you have to secure employment, and the only job opportunity open to us with F-1 Visa, which is a student visa, is to work on campus. And I was, at the beginning, I was really like confused about it because I only just want to get a driver’s license so that I can you know drive in the states.

CASSIDY JACKSON: Ouyang would also like to see changes in the International Student Orientation programming. Ouyang said the orientation, which is just before Wildcat Welcome, was too packed with scheduled activities that she didn’t get to know any of her international peers.

AMY OUYANG: Just have some time and talk to us about some practical issues that some, you know, obstacles that past international students have overcome or have faced so that we are better prepared for what we are getting ourselves into.

CASSIDY JACKSON: Masinjila, on the other hand, said the International office helped her find a job and she felt supported by the staff. However, she wishes that there was more awareness of international issues in the classroom.

ARUDI MASINJILA: Administratively, there is support. In terms of like day-to-day going to classes, I think there’s less of it because, just because like you’re interacting with the majority Americans. I remember I took climate catastrophes in a history class and the professor, he was lecturing, his examples is so like hyperlocal was like Chicago, and the U.S, and this, and this, and this. And I was sitting next to my friend, and he was like, “damn how do you manage to like domesticate world climate histories class. This is this is wild.”

CASSIDY JACKSON: Despite the difficulties for international students at Northwestern, Masinjila is keeping her eye on the prize: her degree. Masinjila said she makes it a priority to think big picture and consistently reminds herself that her identity matters.

ARUDI MASINJILA: America isn’t the end goal. Like I’m just here for a short time and I’m here to get what it is that I’m here to get, which is my degree. So reminding myself where I’m from and it’s going to be in a lot of different ways, just like still keeping up with Kenyan pop culture, or being in tune with like issues affecting Kenya so that I know that I have somewhere that I come from that I can’t, like I don’t want to lose that identity and that connection, even though I’m all the way over here. And what I’m doing here is for the benefit of my home in the long run.

CASSIDY JACKSON: Thanks for listening to part three of the Defining Safe series. This is Cassidy Jackson, and I’ll see you next time.