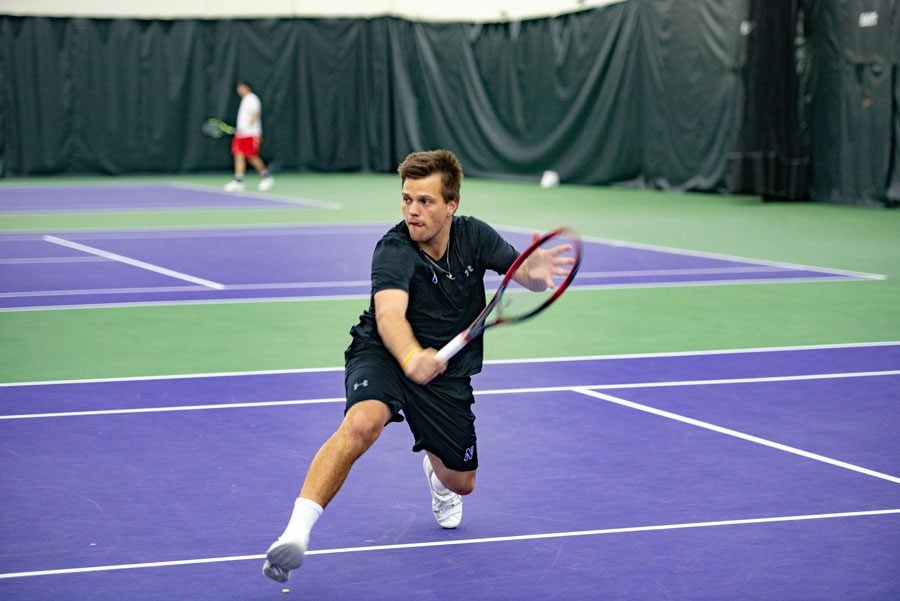 Dominik Stary hits a shot. The Cats fell in two matches to Ohio State and Penn State this weekend.

Northwestern fell to a pair of teams in the top half of the Big Ten standings this weekend, losing 6-1 Friday to No. 2 Ohio State and 4-2 Sunday on Senior Day to Penn State.

The biggest bright spot for the Wildcats (13-12, 4-5 Big Ten) was senior Jason Seidman, who secured NU’s only win against the Buckeyes at No. 6 singles in a super-tiebreak and also beat his Nittany Lion opponent.

“I think we have really good depth,” Seidman said. “One of our top guys is out, so I’m lucky that I have the opportunity to play, and it shows that a lot of the guys who aren’t in the lineup can still play. Just trying to get my best effort out there.”

Outside of Seidman’s win, not many of the singles matches were competitive. Junior Chris Ephron forced a third set at No. 3 and Pickens played a pair of tight sets at No. 5, but the other three matches saw NU win no more than four games total.

The Cats fared better against Penn State (16-7, 6-3), but not well enough. NU lost 6-4 at both No. 2 and No. 3 doubles, allowing the Nittany Lions to secure the crucial opening point.

“It was fun to be out here one more time,” Vandixhorn said. “We had a good crowd and good energy throughout the match, and so we could kind of feed off that and enjoy it for our last time out here. Unfortunately, we couldn’t come out with the W.”

Fasano was easily dispatched 6-0, 6-4 at No. 2 singles, but NU made it competitive on all the other courts. Seidman picked up his second win of the weekend, beating his opponent 6-4, 6-3 to give the Cats their first point. Junior Dominik Stary lost a tight match at No. 1 singles to put NU down 3-1, and the three remaining matches all went to a third set, meaning the Cats would have to win all three to get the victory.

They won just one. Ephron split a pair of close sets against Penn State’s Gabriel Nemeth before winning the decisive set 6-1 to keep his team in the match.

“Second set, I started off a little slow and didn’t really pounce on (Nemeth) like I should,” Ephron said. “In the third, I got an early break the first game, went up and then I started bringing a lot of energy at him, got in his face a little bit and he backed down. I started playing really well, put a lot of pressure on him.”

But it was not quite enough. Pickens fell in his third set to Christos Antonopoulos as the Nittany Lions secured the win.

NU has two regular-season matches remaining, traveling to Wisconsin and Minnesota next weekend. Vandixhorn said the Cats are on the bubble for an NCAA Tournament berth, so these matches could help turn the tide one way or the other.

“We have two very good opportunities this coming weekend,” Vandixhorn said. “If we can come away with two road wins, then we put ourselves in a great position going into the Big Ten Tournament.”