‘If you are too good, you’re not in’: A cappella group dedicated to mediocre singers hosts auditions 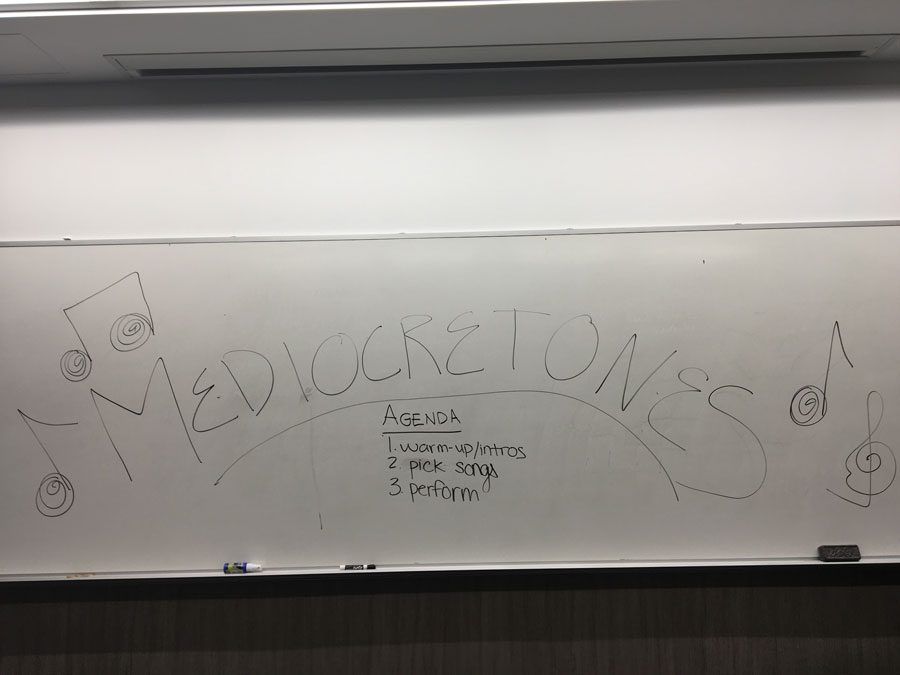 Medicretones is a new a cappella group on campus. The group held auditions in Kresge Hall for all those unable to sing.

Sharpay Evans warm-ups and faint hummings of pop songs could be heard coming from Kresge Hall on Wednesday, as “Mediocretones” auditions began. The new a cappella organization welcomes a group who may struggle to find spots in other singing groups on campus: the untalented.

Garnering an attendance of about 35 students, the “Mediocre A cappella” audition room buzzed with activity, as singers prepared their voices for the opportunity to prove their lack of ability. The preparations died down as Arzu Singh, began to speak.

“Don’t be anxious, this is all for good fun,” the SESP junior said to eager auditioners. “The only fear is that you’re too good. If you are too good, you’re not in.”

The singers were instructed to split into groups. Each group then chose a slip of paper, only then learning which song they would be singing for their audition.

An emotional rendition of “Hello” by Adele came first, as three students belted out the words to the tune that would begin their a cappella careers.

A 14-person group came next, gracing the room with their passionate performance of Avril Lavigne’s “Sk8er Boi,” followed by a rendition of “Kiss Me Thru the Phone” that had every auditionee clapping for their future aca-members.

The cheering climaxed as a group of two confidently missed the high note in Miley Cyrus’s “The Climb.”

Singh said this was precisely the type of fun she had imagined for the group.

“I always enjoyed listening to a cappella and watching a cappella groups perform,” she said. “I just felt like mediocre singers like me could also join in on the fun if only there was a space for it.”

She said the idea originated from a performance by a group of girls in a high school talent show who performed a version of “mediocre a cappella.” In fact, she had been joking about starting a group of this kind since her freshman year.

“I realized that if I didn’t do it this quarter, I probably never would,” Singh said. “Spring quarter is when people have the most time and the most energy. And next year I will be a senior, so I just decided to make a Facebook event and make it happen.”

Singh is planning to organize three rehearsals before the group’s performance at the end of the quarter.

SESP sophomore Bijal Mehta said the low commitment level of the group was a factor in her decision to audition. She also enjoys its stress-free attitude.

“It’s a good stress reliever,” she said. “You just sing your heart out, and it doesn’t matter how good you are.”

McCormick freshman Priya Kini said she auditioned for the unusual opportunity to showcase her voice.

Though Kini usually performs for an audience of just herself, she was excited to audition.

“I [sing] a lot in the shower and in my room, and usually it has to be in my head because it’s pretty bad,” Kini said. “I thought this was the perfect time to let it out.”