Softball: Wildcats look to stay atop Big Ten in series against Wisconsin 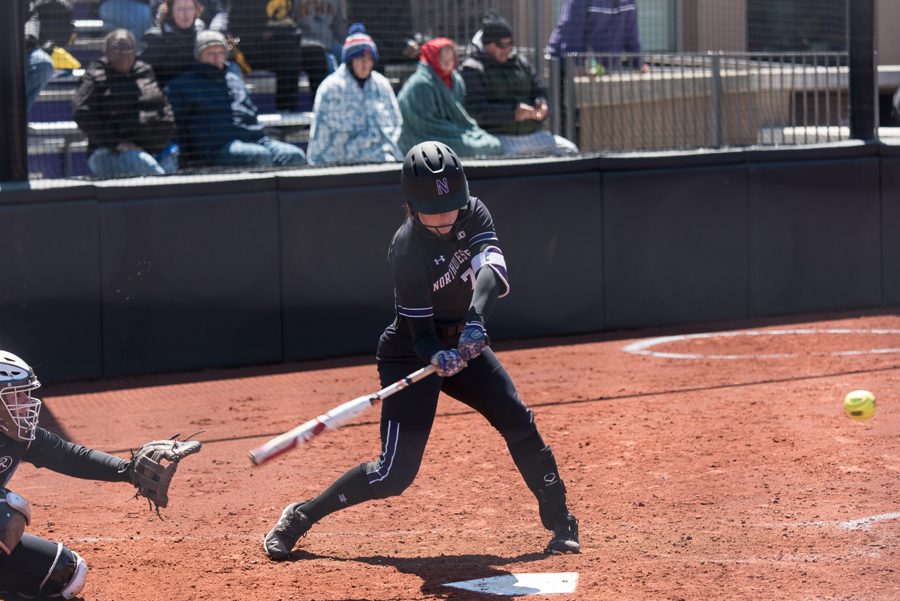 Kenna Wilkey takes a swing. The sophomore was confident about the Cats’ chances heading into a weekend series with Wisconsin.

This weekend, Northwestern will try to defend its first-place standing and perfect record in the Big Ten as fourth-place Wisconsin comes to town for what will be a decisive series.

The Wildcats (30-7, 9-0 Big Ten) and Badgers (30-5, 7-2 Big Ten) both enter riding an eight-game win streak, and will face off for the first time since last May, when Wisconsin beat NU in the final game of the regular season.

“We know we’re going to have a tough weekend,” coach Kate Drohan said. “Wisconsin is a very good team, a very talented team and very well coached, so we’ll certainly have our hands full.”

The Badgers, fresh off a sweep of Iowa last weekend, come to Evanston with powerful bats. Junior Kayla Konwent tops the Big Ten with a .505 batting average and .962 slugging percentage, and freshman Taylor Johnson is in the midst of a 19-game hitting streak.

Wisconsin’s pitching is also impressive, with a team earned run average of 1.47.

“It’s no secret they’ve got power in their lineup — they’re really successful with the long ball,” Drohan said. “We’ll try to limit that, and the key for us will be to get to their pitching and be able to put the ball in play and generate some pressure on their defense.”

The Cats will counter with strong pitching of their own. Freshman Danielle Williams leads the conference in ERA at 1.04, opponents are hitting only .157 off of her, and she’s pitched four one-hit complete games in 2019.

Drohan said she appreciated her players’ focus in practice Thursday, and she wanted NU to keep that focus through the weekend.

“We’re doing a really good job,” she said. “We’re beating good teams, (and) we’re stringing together all these hits — our bats are on fire.”

NU had a solid hitting week with a grand slam from freshman Nikki Cuchran and a two-run homer from sophomore Rachel Lewis highlighting last weekend’s sweep of Nebraska. The Cats also had a six hits — including a pair of doubles — against Notre Dame on Tuesday in their coaches’ 600th career win with NU.

Wilkey said NU’s recent success — including winning the past 13 of 14 and eight straight — has given the team more confidence and helped them work well together.

She said she’s looking forward to the series this weekend.

“I’m stoked to go out there and play with my teammates, get some more wins, and stay undefeated in the Big Ten,” Wilkey said.