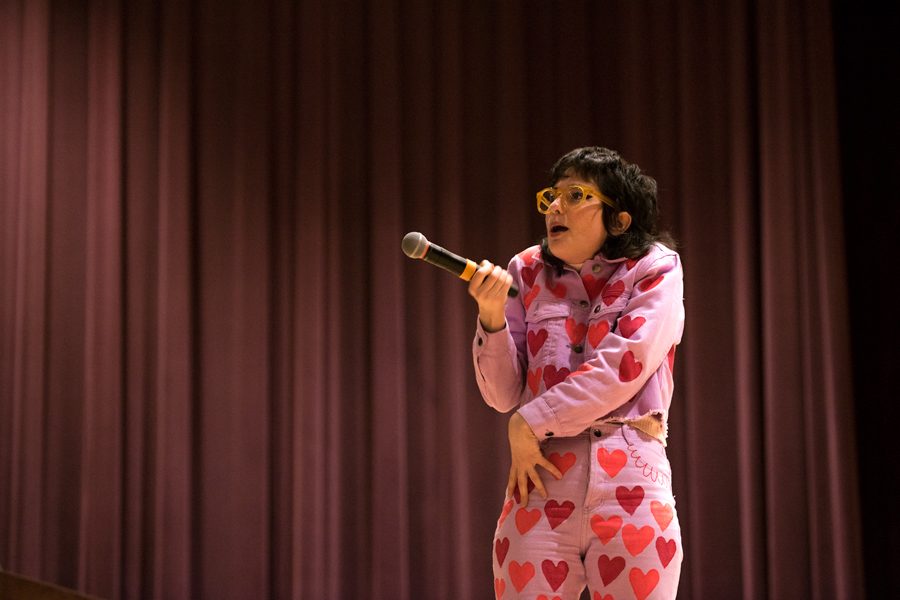 Northwestern alum Sarah Squirm performs standup at McCormick Auditorium. The event was hosted by One Book One Northwestern, and featured Squirm touching on issues of sex and feminism.

While walking onstage to begin her stand-up set, Sarah “Squirm” Sherman (Communication ‘15) saw someone in the audience immediately leave the auditorium. Her response?

“If you don’t laugh at these jokes, you hate women,” Squirm said. “If you walk out during my set, I’ll cancel you, bitch. I can see somebody’s getting #Metoo-ed right now.”

Squirm performed her set at McCormick Auditorium on Wednesday. A comedian based out of Chicago, Squirm is best known for her recent Adult Swim comedy short Flayaway, and was recently named a comedian to watch by Vulture and Thrillist.

The event was hosted as part of One Book One Northwestern’s series of programming. The book of the 2018-19 school year, “The Handmaid’s Tale” by Margaret Atwood, focuses on a dystopian reality where women are subjugated and treated as the property of men.

According to Communication senior Jake Daniels, who hosted the event, Squirm’s comedy style focuses on the female body touches on many of the same ideas as The Handmaid’s Tale regarding women’s role in society, but in a humorous, irreverent way.

One Book director Nancy Cunniff told The Daily that One Book was inspired to bring Squirm to campus by the faculty chair of the year, Helen Thompson, who had seen the comedian perform and learned she was an alumnus. The One Book team wanted Squirm to perform to provide a contrast to the rest of the events they have held over the year, which have skewed much more serious.

During the set, Squirm talked about her experiences at Northwestern, saying she was “triggered” to be back and told everyone to drop out before they get “in crippling student debt in like five seconds.” Squirm told the audience she learned absolutely nothing from her time during the school except that people need to “do drugs and have sex.”

Squirm spoke frankly about her sexual experiences as a student, detailing one time she was “violently finger-banged on North Beach” by a fraternity member who consistently disrespected her only for her to ignore it.

“It took me until I was 24 to develop an emotional infrastructure of confidence,” Squirm said. “I had deeply internalized misogyny… So yeah, last time I’ve been here, I was being fully violated by people who hated me.”

The centerpiece for Squirm’s act was a sexual health lesson that she presented to the audience at the end of her set, accompanied by a PowerPoint presentation with GIFs and diagrams. Squirm started by sharing advice to the audience such as “everybody goes through puberty, but you are still ugly.”

Daniels said he loved Squirm’s set, and he was impressed by her ability to adapt to her audience, noting how strong her material about Northwestern was. He also said he was very impressed by the multimedia elements she incorporated into her set, saying that he had never seen a comedian use so many visual and digital elements like she did.

“She’s working to evolve the medium, which I think is really dope,” Daniels said.