‘It’s time for a recommitment to prudence,’ Schapiro writes in a Washington Post op-ed 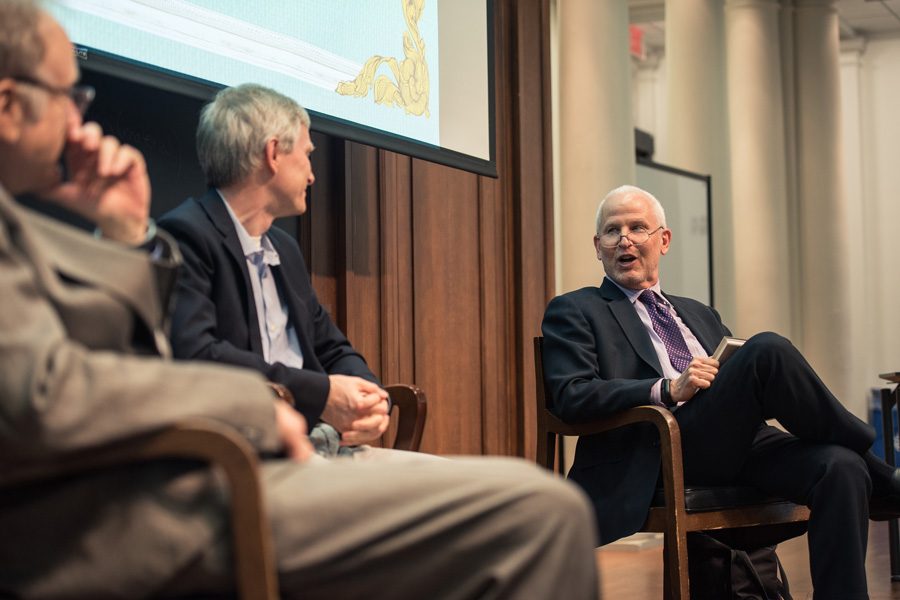 Morton Schapiro, right, and Gary Morson, left, discuss their book “Cents and Sensibility: What Economics Can Learn from the Humanities” in 2017. Schapiro and Morson co-authored an op-ed in The Washington Post arguing that more people should think like economists.

Thinking like an economist could help solve the problems of modern democracy, Northwestern President Morton Schapiro and Slavic languages and literatures Prof. Gary Morson wrote in a Wednesday op-ed in The Washington Post.

In the piece, Schapiro and Morson — who co-authored the book “Cents and Sensibility: What Economics Can Learn from the Humanities” — argue that many politicians today are thinking “almost theologically” and are unwilling to compromise on their positions.

“That is not an economist’s way of thinking,” Schapiro and Morson wrote. A “recommitment to prudence” is necessary if any progress is to be made in the face of issues such as climate change and determining the future of the minimum wage.

“With politics becoming a secular religion, and its practitioners taking similarly inflexible stands, affording little discernible benefit to the nation, it might be worthwhile to consider how an economist would approach some of the vital issues today,” they wrote. “Scarcity exists, and imperfect choices must be made.”

Schapiro and Morson referenced policies supported by both the far right and far left, making sure to note drawbacks of both sides’ ideologies. Taxes, for instance, would lose their effectiveness if either raised or lowered to the extremes, they argued. The Green New Deal, would be more realistic if it didn’t call for “guaranteed jobs along with suitable housing and healthy food for all.”

If people were to think like economists, Schapiro and Morson wrote, they would be more likely to “identify approaches more likely to be effective in attaining good goals — and so are justified ethically as well as practically.”

This isn’t the first time Schapiro has used national news as a platform to convey his political beliefs — in January 2016, he wrote a piece in The Post defending safe spaces as a way of making marginalized students more comfortable, and therefore more prepared to learn.

He also clarified his position on campus protests in the Los Angeles Times later that year, shortly after a letter The University of Chicago Dean of Students sent to incoming first-years — which decried the use of safe spaces and trigger warnings as a barrier to free thought — became the subject of controversy.